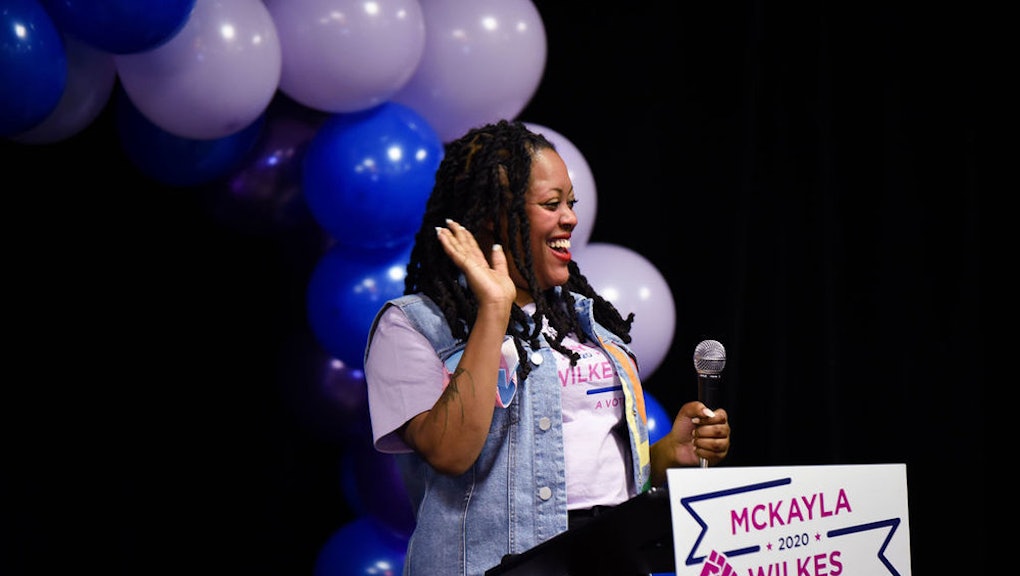 The June 2 primaries are surprisingly stacked. Here are 6 races to watch

Typically, primary season is over by now. State parties should have finished voting on delegates by mid June, in preparation for the national party conventions later this summer. But since coronavirus took hold of the United States, a number of state boards of elections decided to postpone their primaries in an effort to mitigate the virus's spread. Now, as we approach the June 2 primaries, a whole host of states are primed to weigh in on this year's electoral races.

Some are calling June 2 the second Super Tuesday, as 15 states are holding local, state, or presidential primary elections next week. Notably, most states are conducting their elections through mail-in ballots, which has been a hot-button issue lately, as President Trump and other Republican leaders say that absentee voting increases voter fraud (despite evidence to the contrary). Here are some of the elections you should pay attention to this Tuesday.

Democrats have long been interested in ousting sitting Republican Sen. Joni Ernst, who made waves during her 2014 run for office when she promised voters she'd "make [Washington insiders] squeal." Ernst won with 52% of the vote that year, but Democratic leaders are hoping that her low favorability ratings of late will make her vulnerable in November's general election.

In Tuesday's primary, the Democratic Senatorial Campaign Committee has chosen to back newcomer Theresa Greenfield. Greenfield has been endorsed by EMILY's List, but the other Democrats in the race have strong credentials too: Navy veteran Michael Franken has the coveted endorsement of the local newspaper, The Des Moines Register, as well as the support of a number of sitting representatives. Kimberly Graham, meanwhile, has the endorsement of left-leaning grassroots organizations, such as the Iowa chapters of Our Revolution and Sunrise Movement. Businessman Eddie Mauro has been endorsed by a number of local and state leaders.

Republican Rep. Steve King is getting primaried. The 70-year-old has been a member of the House of Representatives for nearly 20 years, but even leaders in the Republican Party want to see him go, as King has a history of making white supremacist statements and supporting racist, nationalist ideas. During his time in office, King has also helped author anti-abortion "heartbeat" bills.

Republican politicos believe that if King remains in office, he'll threaten Ernst's seat in the Senate when he appears on the ballot next to her. And given Republicans want to hold onto their slim Senate majority this fall, it's a risk they're not keen to take. That's why they've backed Iowa state Sen. Randy Feenstra to challenge King in the June 2 Republican primary. Feenstra has raised hundreds of thousands of dollars, including from sitting Republican lawmakers. The U.S. Chamber of Commerce and the National Right to Life foundation have also backed Feenstra.

Polling shows the challenger within reach of a primary win Tuesday, which excites Republicans given King's recent weakness as a candidate. A Democratic challenger to King only lost to the incumbent in 2018 by about 3 percentage points; in the strong Trump-supporting 4th District, that close of a margin isn't a great look for the GOP. If Feenstra can best King, some believe that will up Republicans' chances of holding onto the seat in November.

House Majority Leader Steny Hoyer has held office in the federal government for nearly 40 years. On Tuesday, Hoyer faces four Democratic challengers in a primary, the favorite among them being 29-year-old McKayla Wilkes. Wilkes is hoping that voters are ready for the kind of change she's promising, as she's outlined a progressive platform rooted in the Green New Deal and Medicare-for-All.

While a young challenger taking on one of the most powerful and longest-tenured Democrats in the House is an ambitious goal, there is some very recent precedent for Wilkes's endeavor. But Hoyer has rarely faced a competitive race; in 2018, Hoyer won with 70% the vote in the general election. That means that whoever emerges from the Democratic primary Tuesday has an all-but-guaranteed win come November.

Democratic leaders are a bit nervous about Republican challengers to Rep. Xochitl Torres Small's seat. And in the run-up to the Republican primary on Tuesday, Democratic super PACs have spent tens of thousands of dollars trying to sway voters toward former Republican state Rep. Yvette Herrell, whom they believe to be the weaker candidate against Torres Small come fall.

Even as the Democratic Party is trying to manifest the result they'd like to see, New Mexico's 2nd District went for Trump in 2016 by 10 percentage points. Small only won in 2018 by 2 percentage points, or just under 4,000 votes. That means Small's seat is likely vulnerable no matter which Republican wins Tuesday, though we'll have to wait in November to see if Democrats hold on to the seat.

Montana Gov. Steve Bullock briefly ran for the Democratic nomination for president before deciding to parlay his campaign into a Senate bid instead (just like John Hickenlooper in Colorado). Bullock's term as governor ends this year, and he's prohibited from running for that office again due to term limits. Recent polls have shown Bullock running ahead of the Republican incumbent, Sen. Steve Daines; two will face off in November.

For now, though, Bullock's departure has left the Montana governor's race wide open, with multiple Democrats and Republicans vying for the space in November's election. Bullock ordered that the Tuesday primary be conducted fully by mail for the 700,000 residents in the state.

On the Democratic side, voters will decide between Whitney Williams, the EMILY's List-backed candidate who worked on Hillary Clinton's 2008 run for president. While having worked in politics, Williams has never actually held office. Democratic voters may favor her competitor, Mike Cooney, who is more of a known quantity as the current lieutenant governor of Montana.

On the Republican side, voters will choose between Tim Fox, Greg Gianforte, and Albert Olszewski. Fox is also termed-out of his current position of Montana attorney general, and is running for the governor's mansion on a conservative, anti-abortion platform. Gianforte is probably most well-known outside of the state for body slamming a reporter in 2017, for which he was charged with misdemeanor assault. He's currently a member of the House of Representatives and has spent over $1.5 million so far on his bid. Olszewski, a state senator, has comparatively less money than his fellow Republicans, but is running on a health care-focused platform which could resonate with voters right now.

Bizarrely, the Democratic presidential primary is almost an afterthought in Tuesday's flurry of voting. Joe Biden is almost guaranteed to be the party's nominee against Trump this fall, and how he fares Tuesday likely has little bearing on whether or not he'll be crowned the nominee.

What Tuesday could show, though, is how voters feel about Biden. That's hard to quantify, but the percentage of votes Biden hauls in compared to Sen. Bernie Sanders (I-Vt.) could give a sense of whether Biden has successfully coalesced support since becoming the presumptive nominee earlier this year. Sanders for his part has aligned with Biden in an effort to unite the Democratic Party, but he's declined to remove his name from ballots because the more pledged delegates he takes into this summer's nominating convention, the more power he'll have to dictate the party's presidential platform.

There's a chance that some voters, given that Biden has all-but-secured the nomination anyway, will vote for their first-choice candidate instead as a way of demonstrating their dislike of Biden. The former vice president has also been dealing with a sexual assault allegation (which he has consistently denied) that publicly emerged right as he was solidifying his spot at the top, and Tuesday's votes will be the first big expression of voter sentiment since that story broke.