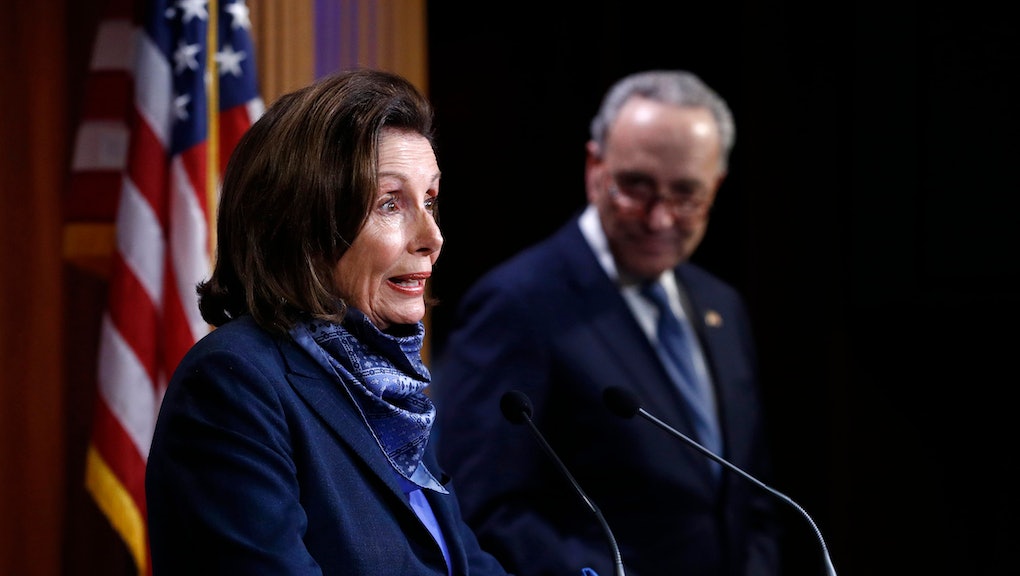 The latest coronavirus stimulus package is what compromise looks like

On Tuesday night, the Senate passed another coronavirus stimulus funding package, totaling around $480 billion in new aid. The bill, which was passed by unanimous voice vote, includes an additional $310 billion in funding for the Paycheck Protection Program, the small business loan program created as part of the CARES Act stimulus package lawmakers passed last month. The new bill also provides $75 billion for hospitals and health care providers as well as $25 billion to fund a federal testing program.

The initial round of $350 billion in funding for the PPP loans was quickly drained by the more than 1.6 million loans issued by the Small Business Administration. Two weeks ago, Republicans sought to pass a $250 billion infusion to PPP, but Democrats held out and bargained for more; in addition to the hospital funding, they sought a round of aid for states and municipalities, which have been walloped by budget shortfalls due to plummeting tax revenues. Republicans pushed back, and Democrats agreed to wait for the next round of funding to seek relief for the states. The bill now moves to the House, where it will reportedly receive a vote on Thursday.

Many have criticized the fact that much of the initial round of PPP funding ended up going to larger companies who had pre-existing relationships with the banks, leaving mom-and-pop businesses and neighborhood restaurants — the businesses that generally have the slimmest margins and needed the help the most — high and dry. Whether the new funding will make its way to smaller businesses is an open question, but the bill did specify that $60 billion of the total will be earmarked for "community financial institutions, small insured depository institutions, and credit unions with assets less than $10 billion." That means that a certain amount of the cash will be given to smaller banks and lenders that are more likely to have pre-existing relationships with mom-and-pop businesses, hopefully resulting in those smaller shops getting the aid.

Generally, the question when assessing a bill like this from a progressive standpoint is whether Democrats got as much as they could have — and clearly, the bill is a compromise. Republicans agreed to several Democratic demands, but forced them to back down from others, like support for the U.S. Postal Service and funding for states. (It should be noted that the fact that Democrats had to fight for testing funds in the first place is outrageous considering how crucial testing is to both public safety and, eventually, responsibly reopening the American economy.)

Some see the final product as the result of Democrats wasting rare leverage over Senate Majority Leader Mitch McConnell, who has been facing pressure from voters and businesses alike to find more funding for the PPP.

“Democrats cave: Nothing for states or cities, nothing for election protection or the post office, no oversight, no limits on fossil fuel bailouts, no food stamps,” wrote Politico’s Mike Grunwald. He’s right that Democrats could potentially have wrangled some of these important priorities from McConnell’s grasp — had they held out longer and thus delayed the much-needed aid. And still, Senate Minority Leader Chuck Schumer managed to jack up the dollar amount on McConnell’s initial ask by almost 100%, which, when hundreds of billions of dollars are involved, is not chump change.

Furthermore, Grunwald’s framing of the bill as a Democratic failure overstates the degree of leverage the Democrats gave away — and understates the amount they will have in the future. Sure, Democrats could have kept negotiating. But this isn’t a zero-sum environment. Every day, more small business owners are going bankrupt, closing their doors, and laying off staff. The longer Schumer spent holding out on a better deal, the more damage the PPP shortfall would have inflicted on workers without any more aid coming down the pike. It may be immoral for McConnell to fight against sorely needed funding for states, but from a mercenary negotiation perspective, his leverage was substantial; without GOP votes, the bill doesn’t pass, after all. McConnell forced Schumer into a game of chicken with millions of livelihoods at stake, and yes, Schumer blinked.

For those disappointed with Schumer’s concessions, the thinking goes that this was a unique opportunity to hold Republicans over the barrel. In the same way that the millions of lives depending on the funding shortfall applied time pressure to Schumer, wouldn’t McConnell feel the same way? And with this deal beefing up the PPP, why would Republicans give in to any further Democratic demands now? McConnell himself has been bolstering this point of view by giving quotes about how deficit concerns should limit future stimulus spending, while his press office derides state funding proposals as a “Blue State Bailout.”

These grumblings should be seen for what they really are: a negotiating tactic. In truth, the Democrats’ leverage will exist as long as the virus does. Republicans know that letting states go bankrupt would be suicidal during an election year. Voters in, say, Pennsylvania, don’t want to see thousands of firemen and teachers laid off during a pandemic. On Wednesday, Republican Sen. Bill Cassidy (La.) joined with Democratic Sen. Bob Menendez (N.J.) to announce a $500 billion aid plan for states and municipalities.

In reality, there will be at least one if not several more huge stimulus packages over the coming months; the previous PPP funding lasted only two weeks, and there’s no reason to expect this new tranche to last much longer. The same goes for the stimulus checks sent to millions of Americans, who will have just as many bills to pay in May as they did in April.

There is no functioning economy, tens of millions of people are unemployed. Both sides will be back at the bargaining table soon. President Trump may believe that he can magically declare the economy “re-opened” in a matter of weeks, but even if governors follow suit and lift lockdowns, consumer spending will likely not return to sustainable levels until a vaccine allows people to leave their homes without fear. Rather than pessimism about McConnell’s miserly tactics, Democrats should consider this latest stimulus bill an occasion for hope — twice in the last month, they’ve squeezed Republicans for hundreds of billions of dollars in consumer aid. In a few weeks, they can do it again.