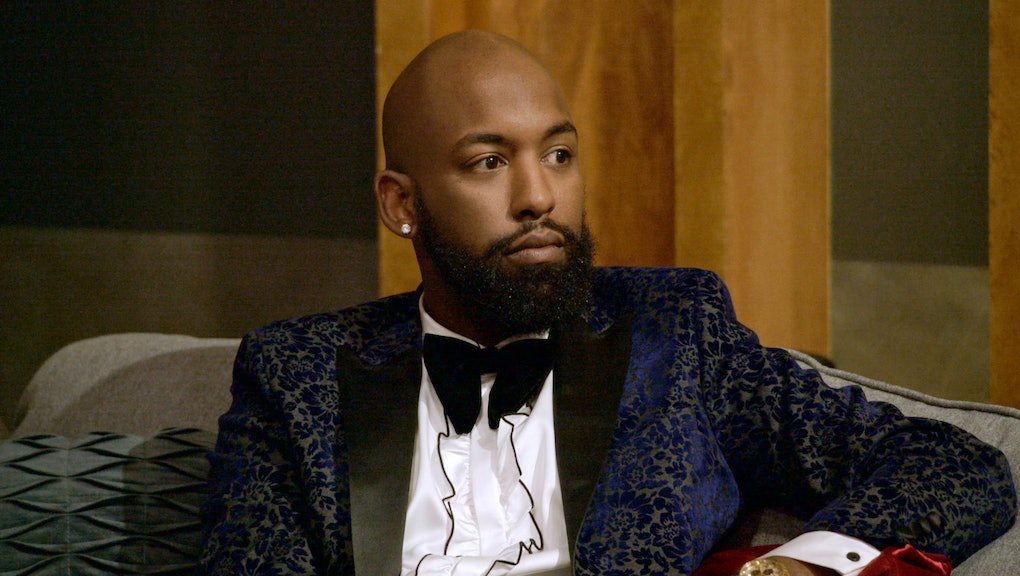 Last night, Netflix dropped the reunion episode of Love Is Blind, its viral hit reality show where couples lookin’ for love and commitment get engaged sight-unseen and then try to sustain their connection IRL for a month culminating in a shotgun wedding. It’s fun and deranged!

Much of the “Where are they now?” episode focused on the drama between Amber, Jessica, and the object of their affections, simpering frat boy Barnett. But the special also reunited Carlton and Diamond for the first time since their dramatic breakup in Mexico, perpetuated by Carlton coming out as bisexual.

To be clear, Diamond objected to the fact that Carlton hadn’t been upfront about his identity in the “pods” — the isolation chambers where singles conversed with potential mates. The couple didn’t get to the part of the coming-out conversation where they’d address whether Diamond could accept Carlton’s bisexuality, because he freaked out and called her a “bitch,” which made Diamond throw a fruity drink and her engagement ring at Carlton as she stormed out of his life.

During the reunion, Carlton revealed that both he and Diamond have gotten death threats from viewers taking extreme sides after watching their fight. Diamond tried clearing the air by noting that Carlton reached out and apologized to her privately after the show.

Erica Chito-Childs, PhD, is a leading researcher on issues of race, gender and sexuality, particularly in popular culture. She told me it’s commendable that Love Is Blind wanted to represent sexual fluidity, but took issue with the fact that the only non-binary person cast was also its lone black man. “These reality shows tell us that they’re cutting edge, that they’re pushing back on social norms,” she said. “But they’re actually playing right into it.”

“You know, the fact that this really attractive black man presents himself as a playboy — like Hugh Hefner, that’s how he comes on saying it — but then his secret or potential dealbreaker is that he’s bisexual. I think it's pretty important to think about that, because representation is so important. Most of the people are white, but then the black couple we do get, they don't work because he's bisexual,” Chito-Childs noted.

She pointed out this happens on reality shows all the time: networks don’t want to be accused of having an all-white or homogenous cast, but they tend to consolidate diversity into one or two cast members who tick multiple boxes.

Love Is Blind’s casting director Donna Driscoll told me the main thing she scouted for were “marriage-minded” people, agnostic of their other physical or demographic traits. On Carlton, she noted, “Everybody was there for the right reasons,” and added that the rest of the cast was supportive of his identity. “There was so much love on that set,” Driscoll said.

“They're not thinking about these things from the standpoint they should be,” Chito-Childs said, however. “The show’s going to say, ‘Well, we didn’t know what Diamond was going to do.’ But they set it up as a secret, purposely emphasizing this narrative of heteronormativity. To me, this is symbolic of how we deal with issues of inequality and racism and homophobia and all of these things in our society. We insert one person to represent diversity, but we do it in really problematic ways.”