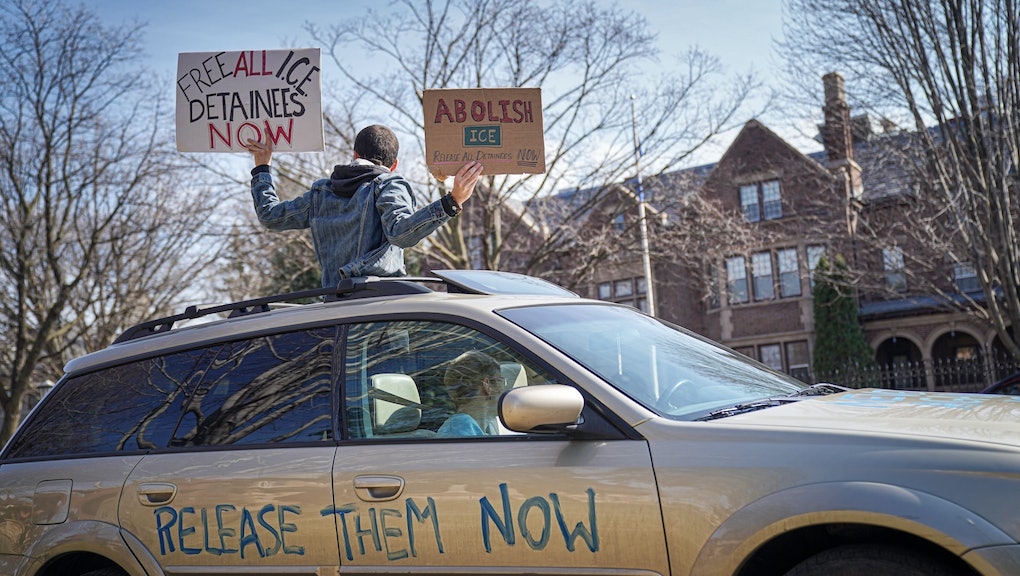 From the moment now-President Trump announced his candidacy for the 2016 election by declaring Mexicans "rapists" who are "bringing drugs" and "bringing crime" into the United States, he has made immigration — specifically, the demonization and criminalization thereof — his top political priority. No matter the occasion, whether real or imaginary, Trump has used every available opportunity to push his staunchly nativist agenda — including, most recently, the coronavirus pandemic that has killed more than 80,000 people in the U.S. to date.

While the president and his allies have seen the COVID-19 outbreak as a springboard from which to further their xenophobic policies, immigrants and immigration activists have also been forced to adjust to the new paradigm of life during the pandemic.

"What became clear that was really urgent was that the stakes for people currently in detention were incredibly high," Alyssa Rubin, an organizer with immigration rights group Never Again Action, tells Mic. "Governors were literally telling people to stay 6 feet apart from each other, and not saying anything about those people in detention centers who are completely unable to follow those guidelines."

Rubin is just one of the many immigration rights activists who shared how the coronavirus pandemic has changed the way they approach their activism during these extraordinary times.

"It's kind of setting up this situation where we might have to defend what we're doing in court."

"The need hasn't stopped," Juan Ortiz stresses. "The severity of the need hasn't stopped." Ortiz is one of the community leaders and activists based out of El Paso, Texas's Casa Carmelita, an immigrant community center born in part from an affiliation of immigrant rights advocates who came together to protest at the nearby Tornillo migrant youth detention facility more than a year ago.

Much of Ortiz's work takes place just across the border from El Paso, in the Mexican city of Juarez, where thousands of migrants seeking asylum in the United States have been forced to wait — first as part of the Trump administration's "Remain in Mexico" policy, and now as the border is effectively shut against immigrants and asylum seekers during the pandemic. Ortiz and his colleagues have been a lifeline to residents of Juarez's shelters and sprawling tent cities, providing medical supplies, hygiene products, and other basic necessities to migrant communities where communicable diseases like measles and chicken pox already threaten public health. It's a job that's become all the more important during this pandemic.

"The thing I think radically changed after the pandemic was that we knew there was a border closure coming," Ortiz explains. "I think it's part and parcel of having existed this last year-and-a-half, because of all the things that have happened on the border, and existing in kind of this crisis mode."

"We had bought a physical space to do the work we were doing because we saw that it was a necessity," he continues. "And then we started filling that space in with material donations that we were receiving from across the country through networks, through organizations, through humanitarian aid. So we were really well-prepared for what came after."

Ortiz notes that activists delivering aid to migrants stuck in Juarez have begun taking extra precautions, such as isolating themselves before coming into contact with their recipients to ensure they are not carrying the virus. He also points out that one of the biggest changes in his work since the pandemic has been how he's treated by American border officials. Describing an encounter with a Border Patrol agent while trying to return to the U.S. from Mexico, Ortiz says he was told his work was "not essential" and claims the agent threatened "to put [me] down as having gone over to Juarez for something non-essential" and claimed Ortiz could be fined.

"That's never happened before," Ortiz adds, noting that "it's kind of setting up this situation where we might have to defend what we're doing in court."

Mic reached out to the Department of Homeland Security, which oversees both ICE and Customs and Border Protection, for comment. The agency referred our query to CBP. We will update this story if we receive a response.

For Rubin, whose activism frequently involves large protests outside of migrant detention facilities, the pandemic poses an entirely different set of challenges: How can people gather to protest while still adhering to the social distancing guidelines designed to keep them safe?

In late March, Never Again Action organized their first car protest outside an Immigration and Customs Enforcement detention center in New Jersey, where activists — safely distanced within their automobiles — honked and waved signs.

"Since then, there's been about 35 actions in states across the country," Rubin says. Most have been similar car protests, she explains, but some have been slightly more daring.

"There's also been some guerilla projections, where skeleton crews are going out to detention centers and other similar places and projecting messages onto those buildings," Rubin says, adding that in Rhode Island, digital activists crashed a virtual board meeting for the Donald W. Wyatt Detention Facility, where just last month a federal judge ordered three ICE detainees to be released due to coronavirus-related health concerns.

"They went onto a Zoom meeting and all changed their profile pictures to various signs," Rubin explains, flooding the board's gathering with activist images. Rubin also says the pandemic has forced Never Again Action to reassess not just how it protests, but who.

"Governors really have become one of the main characters in how the country is responding to the [coronavirus] crisis," Rubin explains. "So we wanted to experiment with targeting governors, and actually putting the onus on them a little bit to use their emergency powers to release folks from detention."

"We really haven't particularly seen a bunch of success with [targeting governors]," Rubin continues. "I think the immigrant rights movement in general right now is trying to answer the question of, 'Where is there leverage?'"

For Bárbara Suárez Galeano, much of that leverage can be found within Congress. In the years prior to the coronavirus pandemic, the Detention Watch Network, where she works as an organizing director, has targeted the federal appropriations process through its "Defund Hate" initiative. The goal is "to demand that members of Congress who see themselves aligning with the interest of migrant communities vote accordingly as it relates to the appropriations process," Suárez Galeano explains. In other words: "reducing the amount of money that both ICE and CBP have to continue terrorizing our community."

Since the coronavirus pandemic hit the U.S., however, Detention Watch Network has expanded its defunding campaign to include Congress's massive pandemic relief bills, as well as "also [tried] to get language into the stimulus package that tries to force ICE to release all people in their custody, or at least all people who are not subject to mandatory detention."

"Our first action [after the pandemic began] was putting out an organizational sign-on letter that called for Acting ICE director Matthew Albence to release everyone in ICE custody," Suárez Galeano says. "For us that's crucial, because we know that in the immigrant rights movement there were gonna be different demands from folks, and some folks were not gonna demand a release for everyone. So we wanted to make sure that the narrative out there was as inclusive and as rooted in the interests in all people detained as possible."

Since then, the group has expanded its pandemic response to feature staggered national "digital days of action" — more direct protests, which range from phone and email campaigns to car-based rallies.

"Our goal with that is to build the pressure on our secondary targets, which are elected officials, to push them to do everything in their power and use their leverage as elected officials to pressure ICE to release everyone from detention," Suárez Galeano explains.

As an example, she cites Democratic Minnesota Rep. Ilhan Omar, who has taken steps to release detained migrants and spoken out in support of providing protections for migrants and undocumented peoples during the pandemic.

When I ask Suárez Galeano about how her network of activists have adjusted to the pandemic, she is extremely forthright in admitting that the pandemic status quo will not last.

"Folks are very energized and ready to move because they recognize the urgency of the moment, and have been giving 110%," she says. "But we also know a lot of folks are also carrying with them the very real effects of this pandemic in their communities and in their home life."

"So yes, folks are really energized and mobilizing, but we know that this level of engagement is not sustainable, and is not healthy," she continues. "That's why we're trying to stagger our days of action together, and not trying to have constant movement in a week. Because we have to allow people to take a break, breathe, and continue doing the work."

Ultimately, while the needs of migrants in detention are uniquely urgent during the pandemic, Suárez Galeano knows that what happens next is just as important.

"For us it's really critical to understand that our key enemy [the government's migrant detention system] is not planning on things going back to normal when this crisis is over. They're planning on taking advantage of this, and gaining ground," she says.

"It's very important to be as aggressive and strategic leading up to the time after this crisis is quote-unquote 'over' to make sure that we're creating a consciousness in our community that shows that we don't need a detention centers ever, and detention centers and cages overall are the real public health crisis," she continues, citing the Pearsall, Texas detention facility where dozens of migrant detainees have been diagnosed with coronavirus, prompting the nearby town's leadership to demand answers as to how the privately owned facility is handling the outbreak.

That sense of urgency balanced with planning for what comes next is shared by activists across movements.

"The immediate needs have become much more immediate, much more dire, in terms of medical equipment, in terms of conditions within detention centers themselves," Never Again Action's Rubin explains. "And it's also become really clear that the need for far-reaching, structural shift is also even more immediate and dire."

More like this
New York has set aside a massive, first-of-its-kind fund for undocumented workers
By Rafi Schwartz
The Chauvin trial is incapable of delivering real justice
By Vanessa Taylor
These organizers are fighting to make sure non-English speakers get vaccinated, too
By Vanessa Taylor
Stay up to date