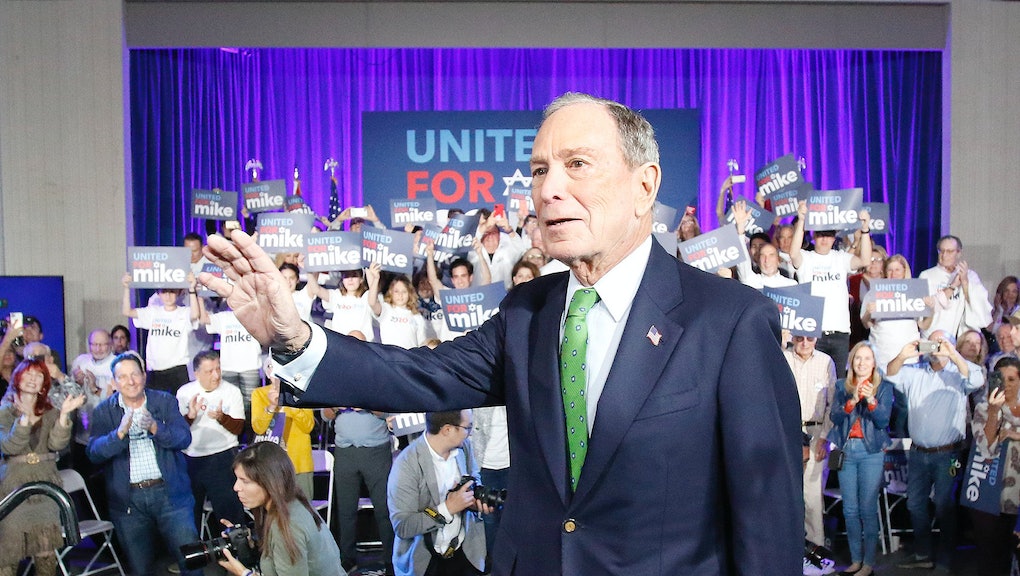 Shortly after midnight Tuesday, voting began in the New Hampshire primary to see how many of the state’s 24 Democratic delegates the party's 2020 hopefuls can grab. Granite State voters take part in a “semi-closed” primary, which means that they can cast ballots in both the Republican and Democratic primaries if they are not registered as a member of either party. In Dixville Notch, New Hampshire — which famously casts its ballots in the wee morning hours — former New York City Mayor Michael Bloomberg received two Democratic votes and one Republican vote by way of "write-ins," giving him a small but symbolic win in the tiny township.

Crucially, Bloomberg is not even on the official ballot in New Hampshire. He decided not to campaign in the so-called “early states” of Iowa, New Hampshire, and South Carolina, saying that it was a better use of his time to campaign in more populated swing states, like Texas and North Carolina. Though the candidate hasn’t been on the ground in the early going, he has spent over $350 million of his personal wealth on ad buys in states that vote later in the cycle. Whether he's successful or not will be revealed March 3 — otherwise known as Super Tuesday, when 15 states cast their primary votes, and on which Bloomberg has hinged the majority of his presidential hopes.

Vermont Sen. Bernie Sanders and Pete Buttigieg, the former mayor of South Bend, Indiana, are thought to be vying for the top spot in Tuesday's New Hampshire primary, with the two having finished neck-and-neck in the messy Iowa caucuses last week. But up for grabs are third, fourth, and fifth place, and while it's unlikely that Bloomberg will garner enough votes to crack the top five — he'd have to beat out at least one of Massachusetts Sen. Elizabeth Warren, former Vice President Joe Biden, and Minnesota Sen. Amy Klobuchar to do that — his grassroots movement has registered for a moment in the polls. So far, with 1% of New Hamsphire precincts reporting, “total write-ins” have fared better than Bloomberg's fellow billionaire Tom Steyer and Hawaii Rep. Tulsi Gabbard, both of whom are actually on the ballot in the state.

A new Quinnipiac poll of registered voters shows every Democratic contender besting President Trump in November, but Bloomberg tops the list when it comes to margin of victory over the incumbent. He originally registered as a Republican in 2001, but re-registered as a Democrat in 2018 and is now seen as able to appeal to large swathes of the Democratic Party. A national Quinnipiac favorability poll also shows Bloomberg coming in just behind Sanders and Biden, and ahead of the surging Buttigieg.

The ability to attract write-in votes is particularly important when considering the undecided voter. Some in the Granite State are literally making up their minds in the voting booth; one New Hampshire woman told MSNBC that she “eeny meeny miny mo'd' it.” And even if Bloomberg finishes exactly where we expect him to on Tuesday, in sixth place or worse, the tiny victories he notches in New Hampshire can give him positive press and allow him to build momentum. That plus the fact that New Hampshire only has 24 pledged delegates to offer the winner of its primary — a sliver of the eventual 1,990 needed to become the Democratic nominee for president — may prove Bloomberg right in the long run to have spent his week in places like California, where 494 delegates are at stake.

The New York Times reported last week, in the midst of the chaos in Iowa, that officials in the Bloomberg campaign have started to appeal to heavyweights in the Democratic Party who have already endorsed other candidates — Biden in particular — to see if they can be swayed to back the former New York mayor instead. The story is a double whammy, alluding to the rumors of a potential poor showing for the former vice president in New Hampshire while also sowing the seeds of a Bloomberg surge.

Given the fact that Bloomberg won a New Hampshire election Tuesday without even being on the ballot, it's not out of the realm of possibility. If Biden and other leaders of the moderate wing fail to gain momentum in the early states, the Bloomberg camp seems to be hoping to attract defectors to their cause — right as their efforts to court March votes ideally pay off.

More like this
Supreme Court justices' political leanings: A guide to the 2021 court
By Vanessa Taylor
There are already 19 QAnon candidates running for Congress in 2022
By Rafi Schwartz
A Minnesota college professor raised $200k in Philando Castile's name. Where did the money go?
By Rafi Schwartz
Stay up to date