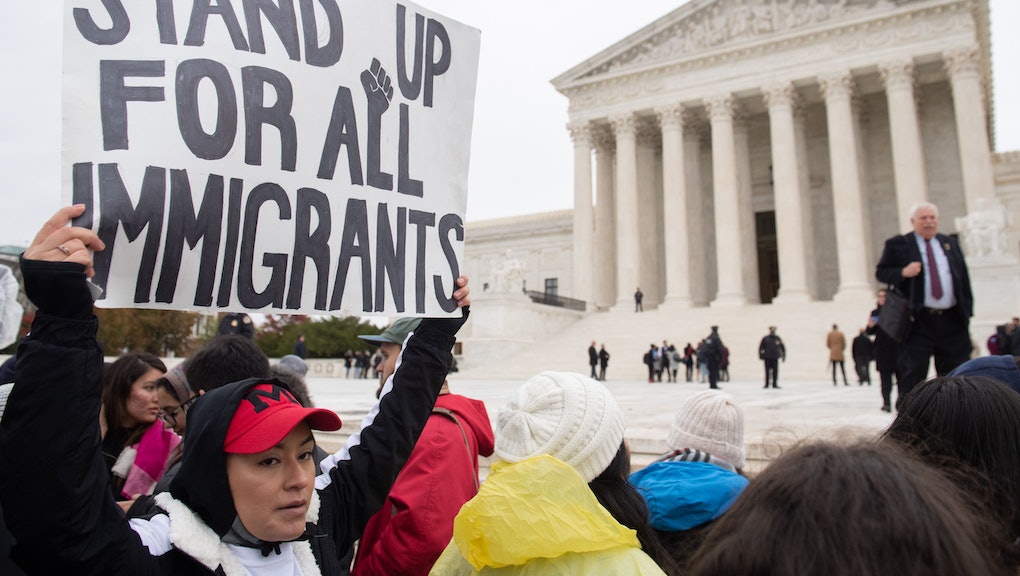 The Supreme Court protects California's right to be a sanctuary state

Amid a flurry of decisions handed down Monday by the Supreme Court, including protections for LGBTQ employees, the justices also refused to hear the federal government's petition to sue California. At issue was whether or not California had the right to refuse cooperation with federal immigration agents — in essence, to operate as a "sanctuary state" for undocumented immigrants. Now, after a years-long legal battle between the state of California and the federal government, the Supreme Court's decision has put the matter to rest.

In late 2017, California passed S.B.54, the California Values Act, which prohibited "state and local law enforcement agencies, including school police and security departments, from using money or personnel to investigate, interrogate, detain, detect, or arrest persons for immigration enforcement purposes." Cities that have declined to cooperate with federal immigration authorities have been dubbed "sanctuary cities," and the practice was not uncommon following the uptick in arrests, detentions, and deportations by Immigration and Customs Enforcement agents. But California's decision to do so on the state-level was enough for the Trump administration to sue.

An earlier judgement made by the U.S. Court of Appeals for the Ninth Circuit wrote of the sanctuary state law that there is “no doubt that S.B.54 makes the jobs of federal immigration authorities more difficult,” but “California has the right to refrain from assisting with federal efforts.”

In upholding the lower court's decision by refusing the federal government's petition to argue their case, the Supreme Court has effectively said that California and other "sanctuary states" like New Jersey are free to continue issuing their own guidance on local and state law enforcement cooperation with federal agents. For example, the California sanctuary state laws prohibit employers from cooperating with ICE agents, and this practice will continue.

California is the most populous state in the country, and is home to nearly 2.4 million undocumented immigrants. However, while the "sanctuary state" law prohibits local law enforcement from cooperating with ICE agents, the legislation does not dictate whether or not ICE agents can act on their own without local support. Researchers and advocates have long reported that these ICE "raids" have serious adverse affects on all immigrant communities and families, as the threats of deportation, family separation, and potential abuses faced in detention often lead to "severe and lasting harm."

The high court's decision not to hear the case is a blow to the Trump administration, which has positioned itself as both anti-immigrant and anti-immigration. The administration has moved to ban Muslim people seeking to enter the country, and just two months ago took an unprecedented step in closing the country's southern border to all people, even asylum-seekers, citing the threat of coronavirus. Just last week, Trump's Department of Homeland Security released a new set of rules regarding asylum claims, which would make applying for asylum so difficult it would be difficult to win an application at all.