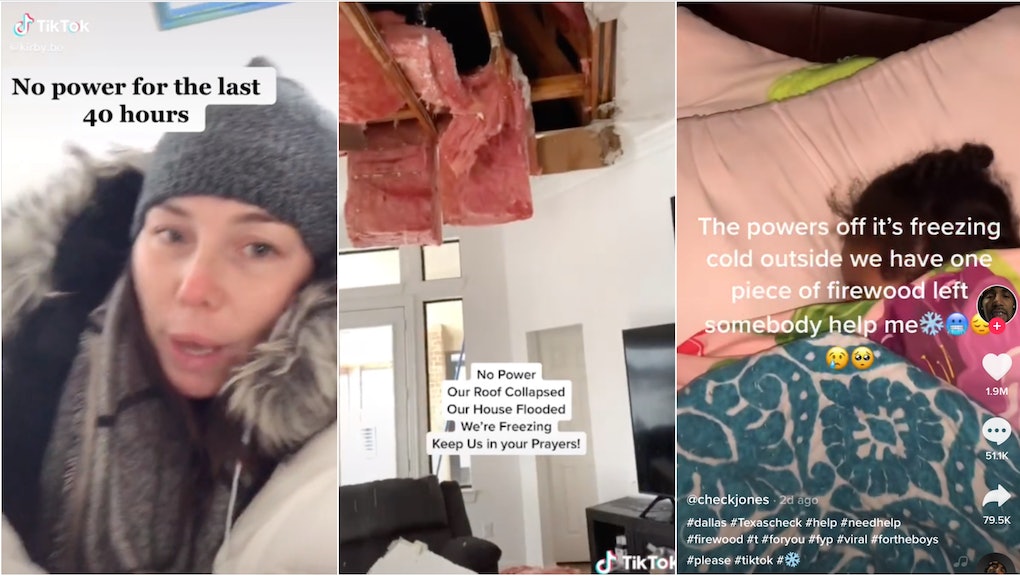 It's hard to imagine what millions of Texans are going through right now. Woefully unprepared for such extreme cold, the state's energy infrastructure basically crumbled and left many, many people without electricity, heat, or safe water for most of the week. Conditions aren't supposed to improve until Saturday, when the weather warms up, meaning freezing Texans will have to fend for themselves a while longer.

The devastation wrought by the historic winter storm is being documented in harrowing detail on social media, giving the rest of the world a glimpse into the dangerous conditions Texans are enduring right now. TikTok is filled with videos of homes flooded by burst pipes, water gushing from the rafters, soggy bits of insulation strewn upon ruined living spaces. (Meanwhile, Texas Sen. Ted Cruz (R) was caught jetting off on a family retreat to Cancun.) To hammer home just how cold it is inside some places, a mom posted a video of her daughter's fish tank which had frozen solid. A father in Dallas down to his last piece of firewood begged for help keeping his family warm.

"We need some help," Chester Jones says in his video, which had more than 6 million views as of Thursday. His four children sleep peacefully, huddled under blankets. In a subsequent TikTok, Jones said the family resorted to burning cardboard, which didn't last long. The American Red Cross commented, encouraging them to stay safe and find a warming shelter if they need help.

Early in the week, TikToks of Texans struggling to function in the snow inspired a certain amount of schadenfreude, as we laughed at a man slipping and sliding in vain on his ice-glazed patio, for example. But as the crazy blizzard devolved into life-or-death scenarios — people are risking carbon monoxide poisoning by using gas grills indoors and running their cars in their garages to to stay warm — the TikToks coming out of Texas have taken a harrowing turn. Now, the platform is functioning as real-time documentation of a humanitarian crisis.

It’s still so cold down in Texas, one woman showed off the icicles that’d formed on her kitchen cabinets after her place flooded and she was without heat.

Many people have pointed out that Texas isn’t built for such extreme cold. Not only can the power grid not handle the weather, homes weren’t constructed with frozen plumbing in mind. The devastation is on par with a natural disaster like Hurricane Harvey, which battered Texas and Louisiana in 2017.

The devastation in Texas is so widespread, that people are turning to TikTok to plead for help — if they have phone service and battery power, that is. The nation is still being pummeled by the severe weather that has crippled the south, and temperatures aren’t supposed to warm up significantly until Sunday. That’s a long time to endure frigid, dangerous conditions like this.

The awful reality is that the nightmare is only just beginning for many Texans. It’ll undoubtedly take families many months to recover from this disaster. Amid the ongoing dangerous weather, President Biden has declared a state of emergency.

More like this
The NFT gold rush, explained by the world's first meme manager
By Kara Weisenstein
How “stoopers” turned New York City sidewalks into trendy, sustainable thrift shops
By Jasmine Vojdani
Instagram now lets you add pronouns to your profile. Here's how to do it
By AJ Dellinger
Stay up to date