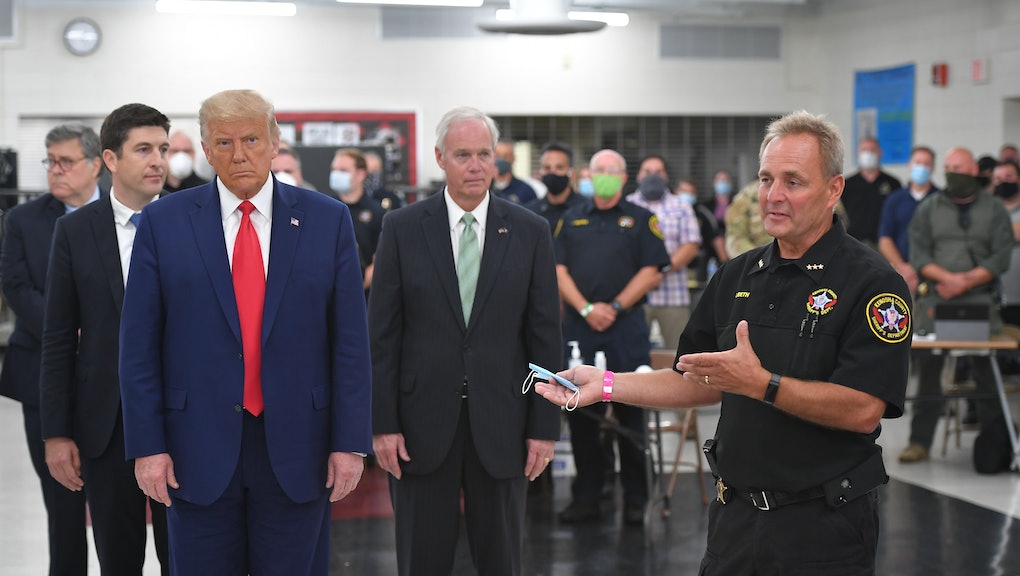 Less than two weeks out from the general election, the Trump administration's Department of Justice announced that it has allocated over $500 million to local police departments through the federal Community Oriented Policing Services (COPS) office. The announcement comes after a summer of protests against police in recognition of the systemic nature of police violence as well as in the name of justice for Black individuals killed by police, like Breonna Taylor and George Floyd.

“Supporting the men and women of law enforcement as they serve their communities is of paramount importance to the COPS Office,” said COPS Office Director Phil Keith in a DOJ statement. “Now more than ever, it is critical that we continue to provide state, local, and tribal agencies the resources they desperately need."

By far, the largest portion of the COPS money is portioned out for supporting the employment of officers. About $400 million of the total funds is allocated for hiring 2,761 full-time officers at 605 different departments across the country. For perspective, the DOJ's COPS office allocated $99 million in 2019 for officer hiring. The DOJ did not explain specifically why there's such a notable increase in hiring funds, though it's likely that the number coincides with events from this summer: As a result of both the coronavirus crisis and protests against police killings of Black people, a number of cities across the country moved to cut their own police budgets.

The Trump administration has long backed efforts to increase the power of local police departments while vilifying largely populated Democratic cities as violent and attacking the leaders who run them. In late 2019, Attorney General Bill Barr announced the creation of Operation Relentless Pursuit, which aimed to reduce violent crime in seven cities by providing resources to local and state police agencies. Early 2020 COPS funding was provided in conjunction with Operation Relentless Pursuit.

President Trump has consistently billed himself as a "law and order" president and has made that a crucial part of his re-election campaign. But though his administration has certainly doubled down on backing local and state police departments, the COPS program started long before Trump took office. Funding through COPS was designed by members of Congress in 1994 as a provision of that year's now-infamous crime bill (authored largely by presidential candidate former Vice President Joe Biden).

The goal of the legislation, as touted by former President Bill Clinton at the time, was to hire 100,000 additional police officers for local departments. In the six years after its passage, the program spent $7.5 billion in tax dollars to hire and train officers, fund drug use prevention programs, and place police officers in publicly funded schools.

In a non-election year, the increased police funding might be mundate. But this year, amid Trump's re-election battle and police abolition efforts springing up all across the country, the DOJ's disbursement of COPS funding is both a material and symbolic representation of the ability of a presidential administration to shape the reach of local police departments.