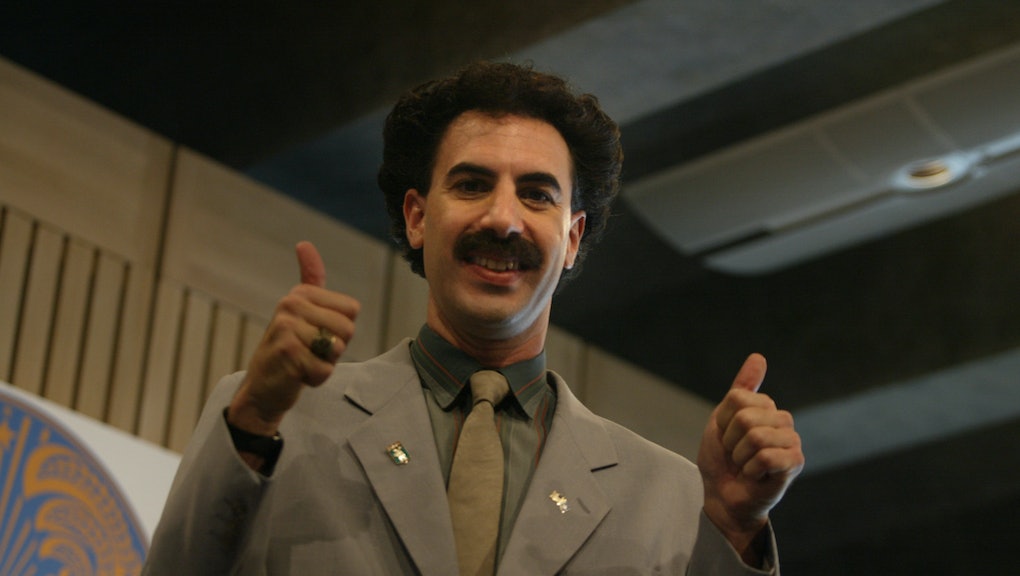 There's never been a better time for more 'Borat'

You can almost feel it in the air, like the changing of seasons: Borat voice is on the verge of a comeback. After spending much of the past decade as an immortal on-again-off-again meme format (*Borat voice* my wife) and continuous household lingo for those who know, a long-awaited Borat sequel is upon us. The official and extremely long title for Sacha Baron Cohen’s follow-up, Borat: Gift of Pornographic Monkey to Vice Premiere Mikhael Pence to Make Benefit Recently Diminished Nation of Kazakhstan, appeared on the Writers Guild of America website over the weekend — but was removed on Sunday.

The film, which comes 14 years after Borat’s original installment, was reportedly screened for industry types earlier this month and could be released before the election. Much like its secret filming during the pandemic — which was revealed in a brief video posted to TikTok — very little is known about the sequel at press time. The original WGA listing sported a hefty team of writers, including Anthony Hines, Dan Swimer, Peter Baynham, Erica Rivinoja, Dan Mazer, Jena Friedman, and Lee Kern. It’s still unclear who directed the film or which studio will distribute Pornographic Monkey, since the first film’s distributor, 20th Century Fox, is now fully absorbed under Disney. You can see where they...might not want to touch this sorta thing.

Cohen’s kept busy for much of this year, duping a far-right rally into a racist sing-along and Rudy Giuliani into a botched interview. These already led to results on their own, including the revelation of Giuliani attempting Borat voice on-record for Page Six.

Although these were long-suspected to be part of his Showtime series Who Is America?, it’s unclear which project he’s been filming these for. Early reports suggest that Giuliani, President Trump’s relationship with Jeffrey Epstein, and the pandemic are in Cohen’s crosshairs for the sequel. And given Borat’s smash success, the character apparently goes undercover to get many of these interviews, explaining the headlines from earlier this year.

The pandemic presents a roadblock for much of Borat’s magic — that is, utilizing the character’s disarming awfulness to get his interview subjects to say and do even more awful things on camera. But considering how little the pandemic’s impeded some of the worst people in America from going about their business, I’d wager he didn’t have too much trouble compiling material. Nevertheless, there’s never been a better time to delve back into the dark soul of America and get Borat voice back into the fold.