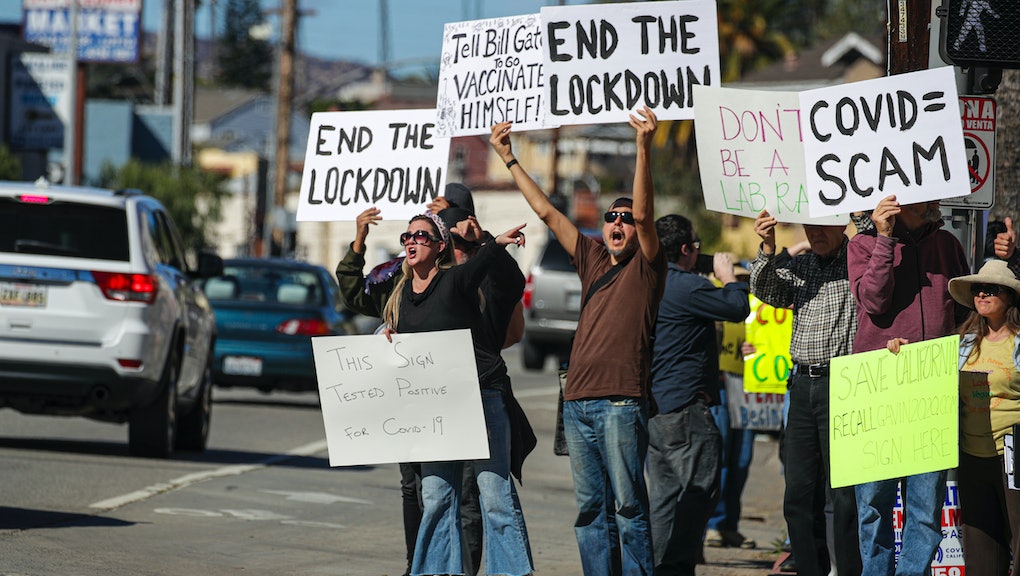 These anti-vaxxers delayed and disrupted vaccinations at Dodger's Stadium

Over the weekend, a small group of anti-vaxxers "protested" at Dodger’s Stadium in Los Angeles — one of the country’s biggest vaccination distribution sites — and caused unnecessary and risky disruptions in vaccinations. Luckily, everyone who was supposed to get vaccinated that day did, so the “protestors” did little more than cause a spectacle, BuzzFeed reported.

These little anti-vax protests seem innocuous enough, but they also demonstrate the scary willingness of anti-vaxxers to try to actively prevent people from exercising their rights while simultaneously proclaiming their own.

The “protest” — a.k.a. a mob of overzealous, COVID-denying clowns — was organized by a Facebook group called, “Shop Mask Free Los Angeles,” a group that advocates violating California health mandates so that entitled white folks are free to shop — and spread disease — unhindered by pesky masks.

Los Angeles, in case you don’t know, has been one of the cities hit worst by the pandemic, reported The Washington Post. While the number of positive COVID-19 cases in LA is now decreasing, over 16,000 people in the county have died from COVID-19 over the course of the pandemic, and the city is still struggling to keep up with the number of folks who require hospitalization.

The actions of these anti-vaxxers seem especially cruel in light of the extraordinary devastation Los Angeles has faced, but luckily, they’re not that great at organizing. The “Anti-mask revolution” that the Shop Free group organized was targeted at their 3,000 plus member base, but only 50 showed up at the baseball stadium on Saturday, The Post reported.

The antivaccivists held signs and shouted their anti-mask vitriol at drivers who were lined up for their vaccination appointments, but no appointments were canceled. You may have read some catchy headlines insinuating that they “shut down” Dodgers, but actually they were more like annoying fruit flies swarming around the entryway.

Look, at the end of the day, your beliefs are your business, so if you think science is bullshit, you can have that. What’s not cool is claiming other people’s right to health somehow violates your own. Screeching in public about it in a way that disrupts the movements of public health officials is not just obnoxious, it’s hypocritical.

And while this type of "protesting" — keeping vulnerable people from their right to a prompt medical care — should be illegal, I’m afraid we can’t count on the cops to step in to protect us from angry white mobs. We can only be grateful that these particular individuals were impeded by their own inability to carry out an effective “plandemic,” but we should also heed that what seems funny now could become dangerous.

More like this
Remember the vaping crisis? Well, it hasn't gone anywhere
By Melissa Pandika
The CDC just announced the mask era is coming to an end (sort of)
By Rafi Schwartz
Could COVID-19 lead to erectile dysfunction?
By Melissa Pandika
Stay up to date