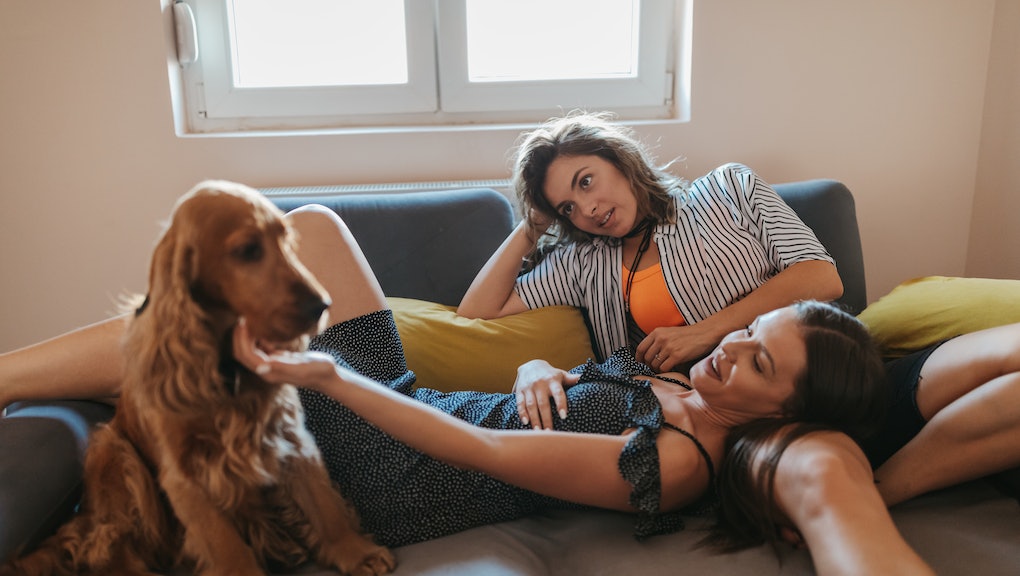 When I met my current bae in person for the first time, I brought my dog, Stevie, along for the ride because she is the trusty guardian of my heart. When he passed the initial sniff test, I was really relieved. Honestly, I just can’t get excited about anyone Stevie doesn’t dig or who doesn’t dig her. This has often been a dating hurdle, because it turns out that some people are terrible animal-hating barbarians or, more reasonably, allergic to my pets. Either way, it’s a dealbreaker. I have always wished I could somehow filter for animal lovers in the dating pool. These dating apps for animal lovers do exactly that.

In 2018, sisters Leigh and Casey Isaacson launched a Tinder-like dating app called Dig Dates that connects dog lovers who are looking for human love to other dog lovers. Like so much important social technology, Dig Dates was born of the real human need to connect and, um, pair bond, or whatever we call getting laid these days. "Originally the whole reason for the app was to get my sister a date," Leigh Isaacson told ABC. The Isaacson sisters came up with the Dig Dates idea after Casey had a romantic misadventure with a man who just couldn’t get down with her dog, ABC reported. See, I’m not the only one who thinks that pet vetting is an important part of dating.

Dig Dates is for people who live what the Isaacsons have dubbed a “dog-forward lifestyle.” The reality of having a fur family is that it’s a lot like having a human family. A lot of my life revolves around making sure the needs of my four-legged loved ones get met. You might say that I have strong fur family values, and it’s really important to me that a partner shares those values and also that they understand the logistical day-to-day realities of pet ownership.

Centering the app completely around dogs would be too precious and gimmicky to actually work, though, right? No one wants to feel like they’re creeping on babes in the Alpo aisle. Instead Dig Dates just puts dating in the context of dogs, which helps lonely humans find other people living the dog-forward lifestyle. When you swipe on someone in Dig, your choices are “Dig,” “Really Dig,” or “Pass.” These are obviously analogous to traditional dating app options, but cuter. Plus Dig Dates suggests first date ideas based on dog activities and has veterinarians and trainers on board to offer dating tips that are actually relevant for dog owners.

If you’re more of a cat fancier, don’t worry, the Isaacsons are releasing a new app, called Tabby, for cat lovers in August. Influencers Sterling “TrapKing” Davis and Nathan Kehn, aka Nathan the Cat Lady, are the app’s official spokespeople, which both subverts the cats are for girls stereotype and also finds dates for men who love cats. "I’ve had women stop talking to me once they find out about my cats," Davis, who leads a nonprofit that helps trap and rehabilitate stray cats in Atlanta, told People. Research does suggest that women find men with cats less dateable, to which I say, “SERIOUSLY?!?”

"People without cats think that cat ladies and cat dudes are loners wrapped up in their bathrobes playing with balls of yarn all day,” Kehn told People. “Really, cat people are the most suitable for real relationships. We understand what it means to earn trust and how to relish affection.” 100 percent yes. I happen to be off-the-market at the moment personally, but I’m keeping both these apps in my mental queue. Who couldn’t use a little more snuggle and fetch in their life?

This article was originally published on July 29, 2020

More like this
The best new dating apps for your Hot Vax Summer
By Tracey Anne Duncan
Jamal Jordan's 'Queer Love in Color' is the expression of joy my inner child needs
By Joseph Lamour
Surging condom sales prove that a summer of hot, safe sex awaits us
By Tracey Anne Duncan
Stay up to date