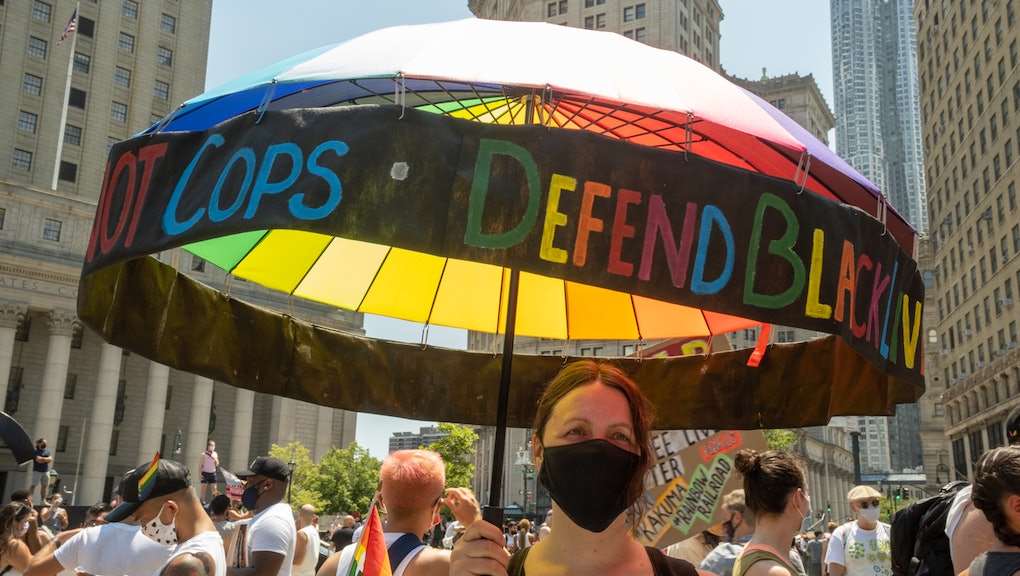 Fifty years flies by fast. June 28, 1969: Non conforming gender and sexual identity patrons of the Stonewall Inn, NYC, rebelled against state violence ­by refusing to continue being the targets of police brutality and discrimination. ­­­­The Stonewall Riots, as they came to be known, went on for days, becoming a major catalyst in the modern LGBTQ rights movement.

June 28, 1970: The first Pride March, known as the Christopher Street Liberation March, was led by a group of activists on the first anniversary of the Stonewall riots. To many, the decades that would follow felt like corporate sponsorship was turning the yearly Pride March into a parade, veering it away from the true spirit of Stonewall. In 2019, The Reclaim Pride Coalition, organized the first “Queer Liberation March and Rally," to honor the legacy of Queer Liberation struggles, past and present, and to demand liberation by resisting continued forms of oppression, celebrating the hard-fought gains won through Queer resistance. This smaller, “scrappier” grass roots march took place on June 30, 2019, the same day as WorldPride NYC, organized by the non-profit Heritage of Pride, which drew 5 million spectators to NYC.

2020: Our world has radically changed. As NYC became the epicenter of the global Covid-19 epidemic, Heritage of Pride cancelled the in-person 2020 Pride March for the first time in 50 years. The death of George Floyd at the hands of Minneapolis police in May became the latest straw that ignited nationwide Black Lives Matter demonstrations. George Floyd’s cry, "I can’t breathe” brought painful memories of Eric Garner’s 2014 cries as his life was also lost at the hands of the police. In response, Reclaim Pride Coalition organized the "Queer Liberation March for Black Lives and Against Police Brutality." On June 28, 2020 — fifty years to the date of the Christopher Street Liberation March, thousands of demonstrators gathered at Foley Square. They marched up to the Stonewall Inn and then on to Washington Square, where there was a confrontation with some protesters and the NYPD. People of all walks of life walked together carrying signs and chanting “No Justice No Peace," “Black Lives Matter," “Black Trans Lives Matter," “I Can’t Breathe," "How Do You Spell Racism? NYPD.”

Fed up with systemic racism, homophobia, transphobia, antisemitism, islamophobia, anti-immigration and hatred flamed by the 45th administration, we marched inspired by those upon whose shoulders we stand. Angels and super heroes from Stonewall and the Civil Rights Movements walked among us — paving the way towards truth and justice for all.

Meryl Meisler is a photographer based in NYC. She is author of the internationally acclaimed photo books A Tale of Two Cities: Disco Era Bushwick and Purgatory & Paradise SASSY ‘70s Suburbia & The City. Her work is represented by ClampArt.