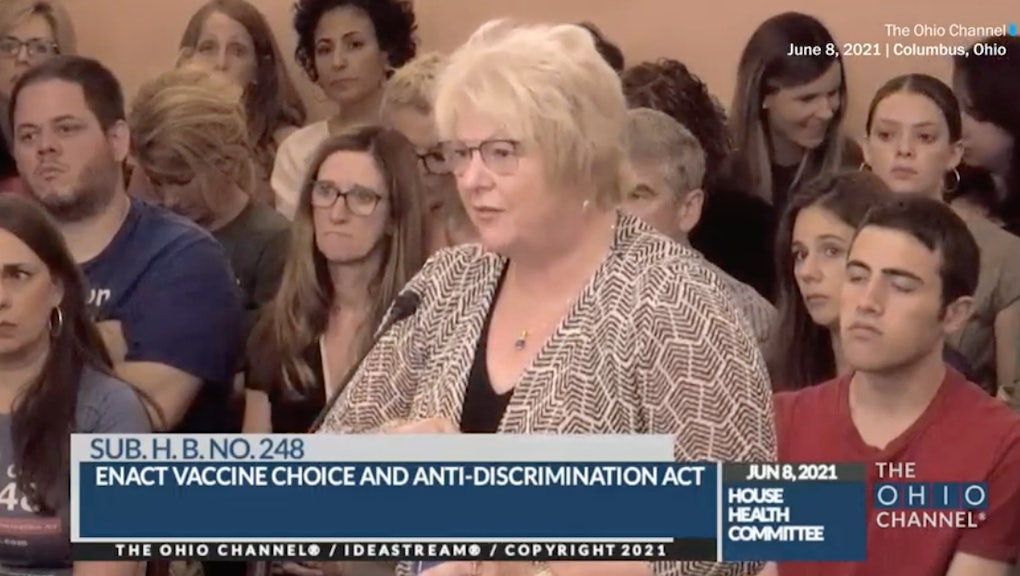 Even before the COVID-19 vaccine rollout, anti-vaxxers were armed and ready with conspiracy theories about why we shouldn’t take them. Most reasonable folks wrote them off immediately, but some of these “theories” seem a bit more virulent than others. And perhaps even scarier: It’s not just lay people who buy into anti-science quackery — some actual medical doctors also seem to buy in, too. Now, one doctor has taken her far-fetched ideas to the Ohio House floor, claiming that the vaccines for COVID-19 will magnetize you.

Sherri Tenpenny, a Cleveland-based osteopathic doctor, was invited to give testimony to Ohio House lawmakers on Tuesday, The Washington Post reported. Tenpenny warned legislators that the COVID-19 vaccines have a “metal piece,” that causes people to become magnetic, as well as a component that can “interface,” with 5G cell towers, The Post reported. In other words, if Tenpenny is to be believed (spoiler alert: she’s not), the vaccines are going to make us all into Magneto. Cool cool.

Tenpenny wrote a book called Saying No to Vaccines, hosts an anti-vaxx podcast, “The Tenpenny Files,” and is an outspoken proponent of the, er, anti-vaxx lifestyle. She was also credited by McGill University as being one of the dozen people responsible for spreading the bulk of misinformation about COVID-19 on social media. So, when you take Tenpenny’s particular brand of “expertise,” into consideration, it’s not exactly shocking that her testimony reads like a comic book.

“I’m sure you’ve seen the pictures all over the Internet of people who have had these shots and now they’re magnetized,” Tenpenny told the Ohio reps. “They can put a key on their forehead. It sticks. They can put spoons and forks all over them and they can stick.” GOP reps were nonplussed by Tenpenny’s remarks, according to The Post. Rep. Jennifer L. Gross (R), a nurse who recently came under fire for comparing vaccination requirements to the Holocaust, went so far as to thank Tenpenny and gush about what an honor it was to witness her expertise.

I don’t know who needs to hear this, but Tenpenny’s anti-vaxx rhetoric is totally unfounded, and not at all grounded in reality. Conspiracy theories about possible magnetic complications with the vaccines and any “interface” with cell towers have been debunked by Snopes, USA Today, Reuters, and basically any other reputable source.

During her testimony, Tenpenny also claimed that 5,000 people have died from the COVID-19 vaccines, a rumor which was proven false by a Post fact check in May. For the record, not a single person in the U.S. has died from getting the vaccine to date, according to The Post. Nor, to my knowledge, has anyone seen Magneto, here or in any other country.

Perhaps the best thing to come out of this spectacle is Ohio journalist Tyler Buchanan’s twitter feed. The Ohio Capital Journal reporter live tweeted from the event Tuesday, fact-checking and debunking Tenpenny in real time. “Tenpenny began by saying she's spent up to 10,000 hours researching vaccines since the pandemic began,” Buchanan posted in one Tweet. “There's only been around 11,000 total hours since the Ohio state of emergency was declared, so that'd be 22 hours per day.” I say we stick a fork on Tenpenny. Even if she hasn’t been half-baking for 11,000 hours, she’s definitely done.

More like this
Why the origin of coronavirus is still a mystery
By Marilyn J. Roossinck
These adorable COVID-sniffing dogs are pandemic heroes — but there’s a catch
By Tracey Anne Duncan
Magic mushrooms could treat depression better than some medications, a new study suggests
By Melissa Pandika
Stay up to date