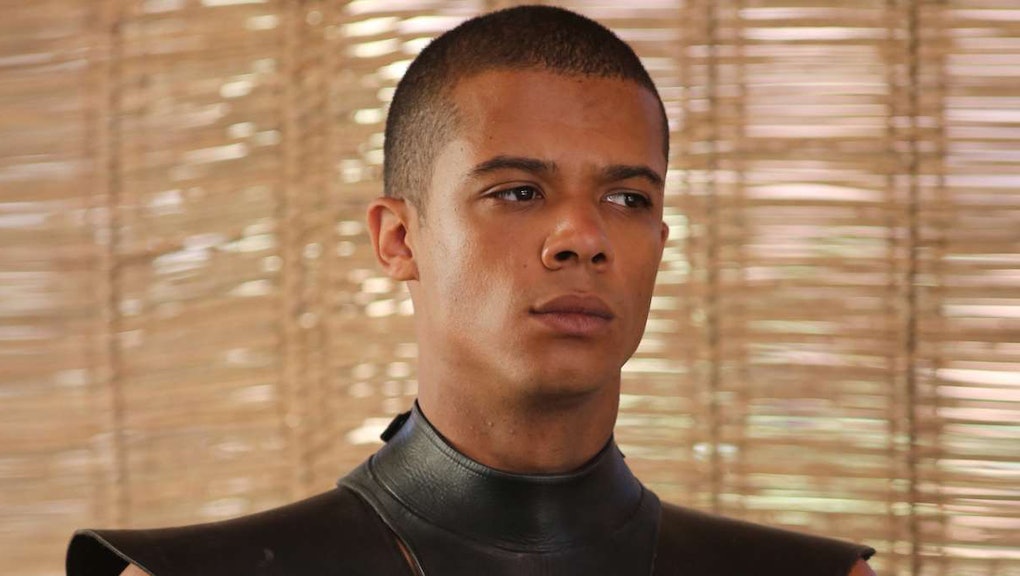 Spoilers ahead. Ever since the Game of Thrones series finale aired, fans have been reeling from its many unexpected twists and turns — especially since new ones are still being revealed, days after the episode. According to a new Game of Thrones finale theory, Grey Worm might've died off-screen, in the time following the show's final events.

As upsetting as that idea might be to fans — the commander of the Unsullied, dead despite managing to survive countless bloody battles?! — the theory actually adds up. According to Uproxx, although Grey Worm ended the finale setting off for the Isle of Naath, finally free to pursue some sort of happiness on his own terms and with the Unsullied at his side, things might've taken a turn for the worse once he landed on the island.

On Naath (the place his late girlfriend Missandei hailed from), Grey Worm would've likely encountered idyllic beaches, swaying trees, and butterflies — specifically, deadly butterflies that carry "butterfly fever." The inhabitants of Naathi, like Missandei, are immune to such a sickness, but for outsiders, it's essentially deadly. The Game of Thrones books describe the situation as such:

“A large species of butterfly on Naath is a carrier for a horrific disease that makes the flesh literally slough off of a man’s bones, but the Naathi themselves are immune to it. For centuries, would-be foreign invaders would end up succumbing to the ‘butterfly fever,’ and the Naathi say none maintained a presence on the island for more than a single year.”

Well, that's brutal. However, since neither the Naathi nor the Isle of Naath's horrible butterflies were mentioned on the show, some viewers are choosing to believe that Grey Worm has nothing but peaceful days with rest and relaxation in sight. Very understandably, they're viewing his trip to Naath simply as a romantic gesture in honor of Missandei, not a total death trap.

Others, though, are sadly not out of line for thinking that Grey Worm probably succumbed to an off-screen death the moment he landed on Naath — and an extremely painful one, at that.

Seeing that Thrones' final three episodes were filled to the brim with major reveals and surprises, from the crowning of Bran Stark as king of everywhere but the North, to Jon Snow murdering Daenerys Targaryen, it's easy to forget about the fates of some of the show's important yet more minor characters. But this Grey Worm theory has truly shaken fans up, especially considering that the commander has already gone through so much, including watching Missandei get beheaded thanks to a vengeful Cersei Lannister. All may have seemed well for Grey Worm at the end of the series, but alas, we should've realized that Game of Thrones is never that kind.

If the thought of Grey Worm dying of butterfly fever hurts you too much, though, feel free to stay in denial and focus on the possibility that since the show took an "out of sight, out of mind" approach when it came to the killer creatures, Grey Worm could very well be alive in the fictional Thrones world. Since it's practically tradition for the series to do beloved character dirty, though, it's probably best not to get your hopes up if you can help it. Pour one out for your favorite Unsullied.