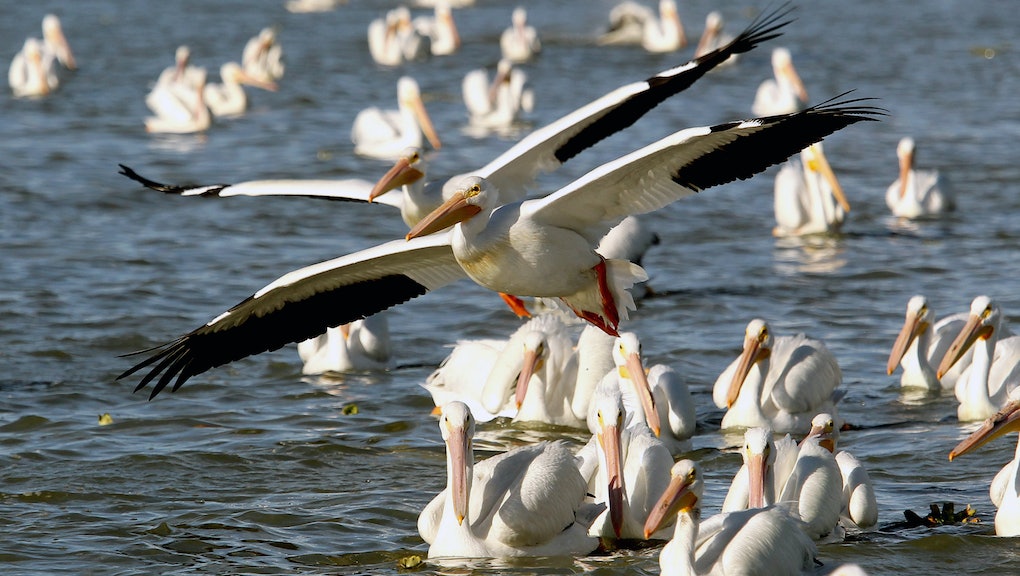 For over a century now, the Migratory Bird Treaty Act of 1918 has been in place to protect birds from unnatural threats to their habitat — including the growing and increasing encroachment of human developments like oil drilling and construction. That protection could soon be stripped away. According to a report from the New York Times, the Trump administration is moving to weaken the rule, allowing for industry interests to turn birds into collateral damage as they continue their polluting, harmful practices.

The proposed change to the existing law would set into stone something that the administration has been pushing since it took office: that prior administrations have been too liberal in their application of the Migratory Bird Treaty Act. Currently, these deaths can result in hefty fines of up to $15,000 per bird killed. Under the Trump administration's reading of the rule, they would be effectively stripped of any penalty for what are considered to be "incidental" killings of birds. That includes death as a result of oil slicks, hitting wind turbines, getting shocked by power lines, or spraying pesticides — even ones that are considered to be illegal to use, according to the Times.

The Trump interpretation of the law would remove one of the government's more effective tools for punishing companies that do harm — even unintentionally — to birds and other wildlife. Take for example the Deepwater Horizon disaster that occurred in 2010 and resulted in more than 200 million gallons of oil being dumped into the Gulf of Mexico. That environmental disaster killed an estimated 800,000 birds, according to Ocean Conservancy. BP paid a $100 million fine for criminal violations under the Migratory Bird Treaty Act for that incident. Under Trump, BP wouldn't have paid a cent and would not have faced any sort of criminal liability. The reason: the birds were not an "intended target" of the spill and were killed unintentionally. That sets a high bar for any hopes of enforcing penalties on bad actors, who would have to act in an explicitly malicious manner in order to get any sort of penalty for their actions.

This is just the latest instance of the Trump administration pulling protections for birds and other at-risk wildlife at times when they need that protection the most. In addition to upending the Migratory Bird Treaty Act — which has been on the president's agenda since 2017 — Trump has also given the go ahead to undo key parts of the essential Endangered Species Act that will undoubtedly put endangered animals, including birds, at risk. Under the Trump administration's guidance, the Endangered Species Act no longer provides blanket protections for animals that are considered to be threatened species at risk of becoming endangered or even extinct. Instead of identifying when these animals are experiencing a population drop, the administration effectively ignores these cases until they become dire. The changes to the Endangered Species Act also removed language that previously prohibited taking into account economic factors when choosing to protect a species. Essentially, prior to Trump taking charge, animals would be protected even if it might encumber business interests in the area. Now, business comes first, allowing fossil fuel and construction companies to continue pushing into previously protected lands and shrinking the available habitat that endangered species require to be rehabilitated. The result is a death-by-a-thousand-cuts that will likely leave many species reeling or push them to the point of extinction.

It has been clear under Trump that corporate interests come first. That same mindset has led to a litany of actions that will unquestionably harm the environment while companies that consume and probe for fossil fuel are allowed to operate without scrutiny. That has included rules that longer require oil and gas companies to report methane emissions, the repeal of a rule that limited the amount of methane emissions allowed on public lands, and the loosening of a law that restricted the amount of toxic emissions from industrial polluters. Trump and his cohorts have also been shrinking the amount of land that has gone untouched by human endeavors. They have moved to shrink the borders around national monuments in order to allow for drilling in areas that were once protected and have done away with regulations that restricted fracking on federal and Native American lands. They've also upended rules meant to preserve coastal areas near oceans and the Great Lakes, choosing instead to open the up to offshore oil drilling operations — all while also scrapping safety regulations that ensure those rigs don't result in devastating spills. Earlier this month, Trump took steps to undo rules that would require construction projects to undergo surveying and determine if they present any risk of environmental damage. Every one of these moves serves to allow companies to push further into natural habitats currently occupied by plants and animals that will be severely disrupted as humans move into their ecosystem.

At this point, Trump's decisions to roll back essential environmental protections don't come as much of a surprise. Since being sworn in, he has managed to successfully undo or at least start the ball rolling on getting rid of nearly 100 rules meant to protect the environment. There is certainly an irony in the case of Trump targeting the Migratory Bird Treaty Act, given how he's feigned concern for birds when talking about wind turbines, which he claims are responsible for the mass killing of birds. (They aren't.) But for essentially every other decision, Trump's agenda is clear: he has surrounded himself with fossil fuel promotors and lobbyists for industrial industries, and they have his ear. Most of Trump's policies regarding the environment serve to make life easier for corporations that want to drill on land that was previously restricted to them or build in areas that were intended to be protected. For the Trump administration, it seems environmental protection is just a fancy word for red tape that stands in the way of profit — planet and all its inhabitants be damned.