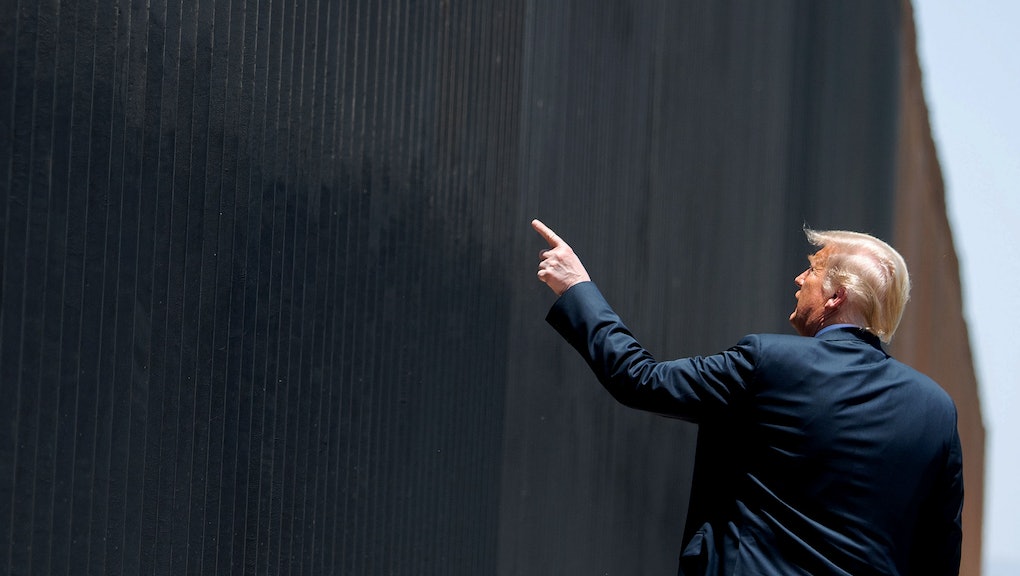 It's no secret that President Trump envisions his far-from-completed border wall along the southern border as something of a throwback to a past era of overt brutalism and terror. To his mind, The Wall should be as much a punitive source of physical harm as it is a deterrent.

In this spirit, two recent disclosures from former administration officials are both a depressing affirmation of the White House's bloodlust and a shocking escalation of what the president and his enablers apparently have in mind when they picture the complete separation of Mexico from the United States.

Speaking with The Daily Beast, former Department of Homeland Security chief of staff Miles Taylor claimed he'd sat in meetings with the president in which "[Trump] says, 'We got to do this, this, this, and this,' all of which are probably impossible, illegal, unethical."

Among the things Taylor claims the president suggested are efforts to gas, "maim," and "pierce the flesh" of migrants attempting to cross into the United States without documentation. At one point, Taylor said, "[Trump] looks over me and he goes, ‘You fucking taking notes?’"

"This was a man with no humanity whatsoever," Taylor stressed to The Daily Beast — perhaps not the most surprising insult to be levied against the president, but one that nevertheless should scare the bejeezus out of you, considering it's coming from someone who held a top leadership position in an agency hardly known for having much humanity itself.

Indeed, Trump's deranged suggestions seemed to have created an atmosphere that fostered gruesome and torturous ideation when it came to immigration.

In a meeting between Customs and Border Protection officials and Department of Homeland Security figures in the days ahead of the 2018 midterm elections, CBP agents suggested using the military's "Active Denial System" along the southern border, The New York Times reported Wednesday. Described in chillingly bland terms by the Department of Defense as a "non-lethal, directed-energy, counter-personnel system," the ADS is essentially a pain projector (the Times used the term "heat ray") that subjects targets to the sensation of "heat felt from opening the door to a hot oven" all over their body. If deployed, the device would essentially make even approaching the U.S.-Mexico border a painful experience.

Per the Times, the proposal was rejected, and "Kirstjen Nielsen, then the secretary of Homeland Security, told an aide after the meeting that she would not authorize the use of such a device, and it should never be brought up again in her presence." DHS insisted to the paper that the ADS was "never considered."

Still, according to the officials who described the meeting to the Times, using a military pain ray to subject potential migrants to a burning sensation was at least entertained by some within the agency, presumably emboldened by the president's own proclivity for musing about ways to physically harm immigrants — a tendency that he played up in the (ultimately unsuccessful) hopes that it would deliver him a midterm victory.

More like this
Lara Trump's border solution is for people to "arm up and get guns and be ready"
By Rafi Schwartz
Kamala Harris's trip to Guatemala highlights Biden's impossible task on immigration
By Vanessa Taylor
Donald Trump, king of scams, says Bitcoin is a scam
By Rafi Schwartz
Stay up to date