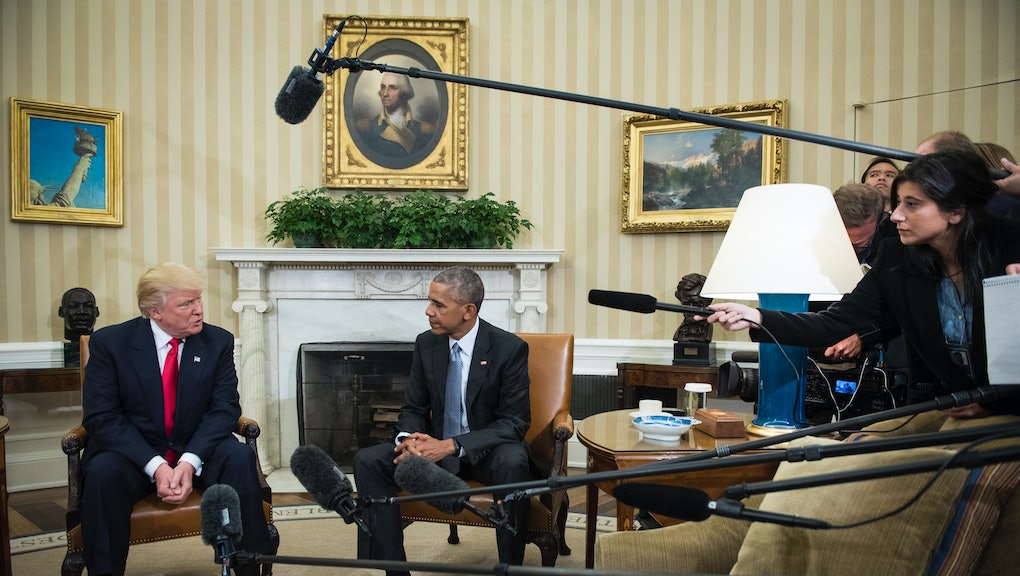 President Trump seems to have pivoted from coronavirus, the “invisible enemy” he’s been haranguing for weeks, towards a more visible one he seems far more comfortable with: Barack Obama. Over the last week or so, following the Justice Department’s sudden and sketchy decision to drop charges against Trump’s former national security adviser Michael Flynn, Trump has unleashed a Twitter tirade targeting his White House predecessor, whom he accused of committing the “biggest political crime in American history.” He’s dubbed the whole thing “Obamagate,” alluding to a cryptic conspiracy that supposedly makes Watergate “look small time” by comparison.

During his posting spree, Trump retweeted Sidney Powell, Flynn’s lawyer, who claimed Obama was involved in trying to frame Flynn. He additionally retweeted a photo of himself captioned, “Hope you had fun investigating me. Now it’s my turn.”

On Monday, a reporter asked Trump to clarify what exactly he’s accusing Obama of doing. “You know what the crime is,” Trump replied. “The crime is very obvious to everybody, all you have to do is read the newspapers.”

This is certainly not true, unless the “newspapers” Trump was referring to are the constellation of fringe right-wing conspiracy sites that have been pushing a variety of baseless conspiracy theories under the banner of “Obamagate” for a while now. These tangled threads are hard to follow and often intersect with the feverish fantasies of QAnon conspiracy theorists and the like. At The Bulwark, Tim Miller summarized Obamagate as follows:

Four years ago, there was a global conspiracy — comprised of President Obama, Vice President [Joe] Biden, Director of National Intelligence James Clapper, FBI Director Jim Comey, much of the FBI, the DNC, a company called CrowdStrike, multiple foreign intelligence services, and Ukrainian oligarchs — to undermine Donald Trump by planting a phony conspiracy theory that he was colluding with the Russians to win the 2016 election. These deep state operators framed several top Trump officials, fabricated evidence, and spied on the campaign with the end goal of committing the biggest fraud in American history in order to derail Trump.

The obvious counterpoint to this theory is that if all of these people spent so much effort to frame Trump, why did the FBI send a letter with damaging information about his electoral rival Hillary Clinton to Congress mere weeks before the election, very possibly handing Trump the White House?

Though Obamagate has been percolating in the fever swamps for a while, the Flynn news has pushed it further toward land. Many Trump supporters have been recently promoting the notion of legal consequences for Obama and his officials on Fox News. Earlier this week, Joe DiGenova, whom you may remember from his role as Giuliani’s lawyer in the Ukraine scandal, claimed that the DOJ is preparing a “massive” case against former members of the Obama administration. “There's a conspiracy indictment coming down the track,” he claimed.

Much of what DiGenova is claiming about Obama’s involvement has to do with a meeting on Jan. 5, 2017, after Trump won the presidency but two weeks before his inauguration. At this meeting, Obama met with top law enforcement officials Sally Yates, then the deputy attorney general; Susan Rice, then the national security adviser; and John Brennan, then the CIA director, in addition to Comey, to discuss the investigations into Trump’s alleged Russia ties.

DiGenova claims that Obama committed “sedition” in that meeting, when he asked “to be kept informed so he can help decide whether or not they're going to withhold classified information from the incoming administration involving Russia.” In fact, in an email Rice sent about this meeting, she stressed that Obama "reiterated that our law enforcement team needs to proceed as it normally would by the book.”

Beefing with an old rival allows Trump to change the channel away from coronavirus, which has caused him months of horrific headlines without providing a substantial foe for him to latch on to.

Trump has a long history of pushing tenuous claims about Obama, stretching back to the birther claims that first raised the then-reality TV star’s profile in the GOP a decade ago. As president, he’s spent an enormous amount of political capital trying to undo Obama’s various accomplishments, ranging from emissions regulations to the Affordable Care Act; he even refused to call off a lawsuit that seeks to end the ACA, despite the current health crisis caused by coronavirus. Clearly, he feels comfortable using his predecessor as a foil and in fact holds a deep-seated grudge against him that seems to go above and beyond standard political rivalry. Furthermore, beefing with an old rival allows Trump to change the channel away from coronavirus, which has caused him months of horrific headlines without providing a substantial foe for him to latch on to. Trump is a fighter by nature, and he’s likely hoping to move away from the difficult terrain of leading a national public health response and on to the terra firma of television roasts.

Politically, however, he may be operating on thin ice. Obama left office with a substantial approval rating, which has only grown over the past three years. He’s more popular than Biden, who is likely to be Trump’s election rival this fall; by turning the 2020 campaign into a referendum on Obama, Trump may be exchanging a weak rival for a stronger one. And while attacking Obama is sure to fire up his base, it may also fuel antipathy among Black voters, a key coalition for Biden. While it may feel satisfying for Trump to bash an old rival, the greatest beneficiary of his attacks may end up being his new one.

More like this
Nancy Pelosi took a stand on the Jan. 6 committee, and it left Republicans whiny as hell
By Rafi Schwartz
Trump finally found some "pussies" he doesn't want to grab: DC's capitol police
By Rafi Schwartz
Sarah Sanders is here for the vaccine — as long as she can credit Trump for it
By Vanessa Taylor
Stay up to date