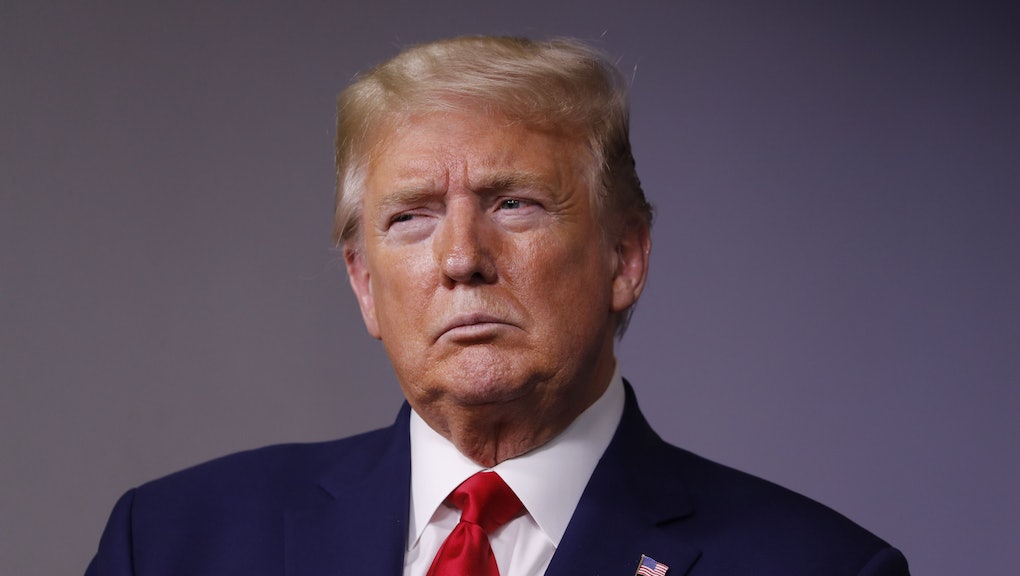 Trump says he'll suspend all immigration to the U.S. because of coronavirus

From being slow to invoke the Defense Production Act to essentially telling governors they're on their own, President Trump's response to coronavirus has left a lot to be desired. Trump seems to remember his presidential powers now, though. Late Monday, Trump announced his plans to temporarily suspend immigration into the United States, which he says is an effort to restrict the spread of coronavirus.

You might think this kind of announcement would come through official avenues like the White House, but you'd be wrong. Just after 10 p.m. ET, Trump wrote on Twitter that "in light of the attack from the invisible enemy" — his new moniker for coronavirus — "as well as the need to protect the jobs of our GREAT American citizens, I will be signing an executive order to temporarily suspend immigration into the United States!"

The Department of Homeland Security is still finalizing the text of the order, which could be signed as soon as Tuesday, The Washington Post reported. It's unclear if Trump told anyone, including other countries, about his plans before he tweeted them, nor are there details on how long the suspension could last. This may set the stage for yet more mass confusion at airports like what occurred after Trump's travel ban in 2017.

Although the Trump administration has put travel restrictions on most of Europe and Canada due to the pandemic, it's near impossible to separate Trump's decision from his history of xenophobic policymaking. That includes his border wall project — which is harming the environment and destroying Native American burial grounds — and his numerous racist comments, not to mention his infamous travel bans that targeted majority-Muslim countries.

Before this executive order, Trump had cracked down on immigration in various ways too, including by ending the Deferred Action for Childhood Arrivals (DACA) program and restricting asylum. Democrats have condemned his plan to suspend immigration; Rep. Joaquin Castro (D-Texas), the chairman of the Congressional Hispanic Caucus, tweeted that it was "an authoritarian-like move to take advantage of a crisis and advance his anti-immigrant agenda."

Earlier this month, the Trump administration cited coronavirus in implementing a new rule that allows asylum-seekers to be turned away immediately by border agents. Asylum-seekers have been targeted by this administration before, like when they were turned out onto the street with no resources.

The White House has also begun working with the Department of Agriculture to slash wages for migrant farmworkers, even as farm laborers have been deemed essential. It's unclear, though, whether Trump's plan to suspend immigration would apply to such temporary laborers.

More like this
Vaccines are good. Threatening to evict someone over them is not
By Rafi Schwartz
It appears once again that the Democrats are willing to tank their whole agenda because of "rules"
By Rafi Schwartz
I never want Tucker Carlson to stop talking about Nicki Minaj's cousin's friend's enormous balls
By Rafi Schwartz
Stay up to date