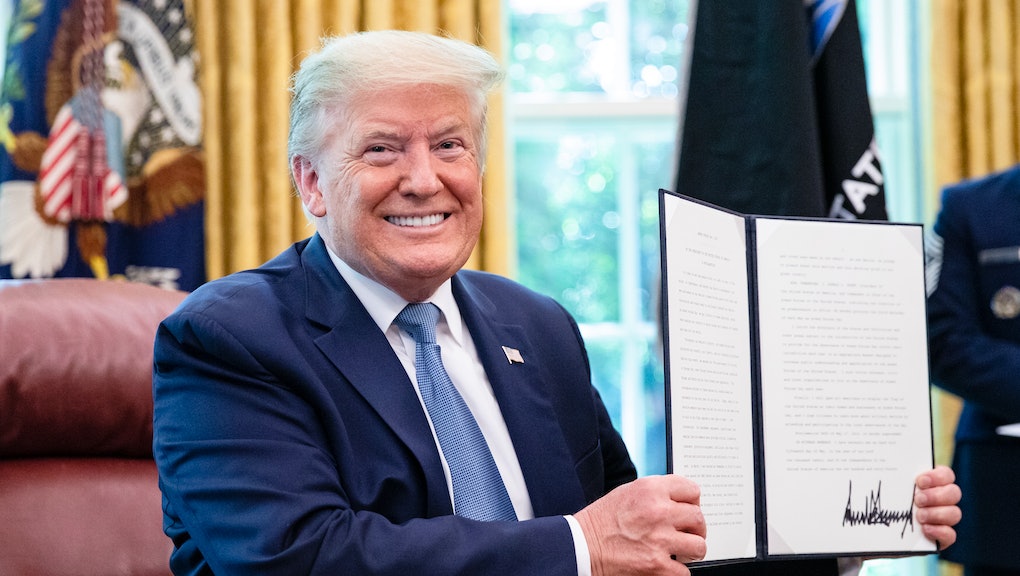 Trump tries to rally support around a "super duper missile"

It's been a bad week for America — the latest in a series of bad weeks that has seen the coronavirus death toll steadily climb while the stock market yo-yos and people in states across the country continue to rage against the lockdown measures intended to keep them safe.

It is in this quagmire of badness that President Trump attempted to rouse an exhausted nation using all the tools at his disposal: specifically, truck horns, flags, and the sort of binders you can buy at Target for like 2 bucks apiece.

First, the truck horns, which blared consistently throughout the president's afternoon Rose Garden press briefing, during which he insisted that "vaccine or no vaccine, we're back."

Claiming that the steady thrum of truck horns was a "sign of love," the president bragged that the truckers circling outside the White House were actually "protesting in favor of President Trump, as opposed to against." In fact, truck drivers have spent weeks protesting against low shipping rates and begging the administration to get involved on their behalf.

After his press briefing concluded, the president retreated to the quiet solitude of the Oval Office, where he participated in an extremely un-socially distant flag unveiling for his nascent Space Force, before launching into a rant about an in-development "super-duper missile" (his exact words) that he claimed would travel "17 times faster than what they have right now."

When asked a short time later to explain what the president was talking about, White House Press Secretary Kayleigh McEnany demurred, and urged reporters to simply revisit the president's super-duper statement.

McEnany did, however, want to discuss the pandemic preparedness plans left by the Obama administration — plans which had been downplayed, and whose existence had in fact been fully denied (at least temporarily) by some Republicans.

"This thin packet of paper was replaced by two detailed, robust pandemic response reports commissioned by the Trump administration," McEnany triumphantly declared during her Friday afternoon briefing. She then waved around two black binders which, she implied, were bigger and therefor better than the 69-page National Security Counsel document left by the Obama White House.

This, unfortunately, is where we stand as a country: honking horns, "super-duper" weapons of war, and a binder-measuring contest between administrations. Suffice it to say, things don't seem great.

More like this
Sarah Sanders is here for the vaccine — as long as she can credit Trump for it
By Vanessa Taylor
So weird how Sean Hannity is super into the vaccine now
By Vanessa Taylor
Nancy Pelosi took a stand on the Jan. 6 committee, and it left Republicans whiny as hell
By Rafi Schwartz
Stay up to date