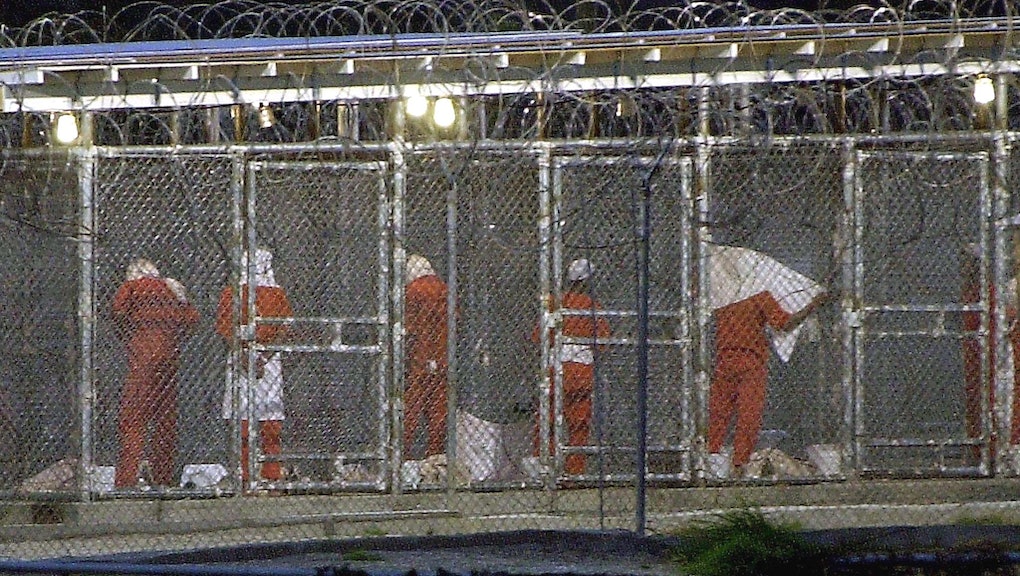 Trump wanted to quarantine Americans at Gitmo last spring, according to a new book

It's hard to imagine Donald Trump having a worse response to the coronavirus pandemic than he actually did. As you may recall, in the early, paranoid months of COVID-19, Trump did a very, very, very, very, very bad job of, well, just about everything. And yet! As has so often been the case with our ignoble former president, what we saw at the time was just a fraction of the true idiotic insanity going on behind the scenes.

In Nightmare Scenario, a forthcoming book by journalists Yasmeen Abutaleb and Damian Paletta, the chaos that surged through the Trump White House at the onset of coronavirus's landfall in the U.S. is best exemplified by a stupefyingly ignorant conversation the then-president reportedly had with his advisers. In excerpts from the book obtained by The Washington Post, Trump is described as attempting to rub his last remaining neurons together in the hopes of sparking something resembling a coherent solution to the problem of American tourists returning to the country in the midst of the pandemic.

As you've probably guessed by now, it did not go well.

"Don't we have an island that we own?" Trump reportedly asked his assembled advisers during a February 2020 meeting in the White House Situation Room. "What about Guantánamo?"

Ah yes, Guantánamo. The U.S. Naval base wherein the military has kept a host of alleged national security threats captured and detained over the years from its wars in both Afghanistan and Iraq. And here is the president of the United States musing not once, but — according to Abutaleb and Paletta — twice in a single meeting, about forcibly filling it with COVID-positive Americans to keep domestic infection rates down.

"We import goods," Trump reportedly pontificated to his assembled advisers during the meeting. "We are not going to import a virus."

Of course, as we now know, the COVID-19 virus had almost certainly been in the United States for months before Trump's brilliant plan to ship American tourists to a military prison.

Now, in fairness to Trump, the thought process that led him to make the leap from "an island that we own" to "Gitmo!" may not have been as direct as it seems. He is, after all, the man who attempted to buy Greenland, which is, technically, an island. And perhaps it was only after realizing that the United States doesn't actually own the Danish landmass that Trump settled on Guantánamo Bay. Who's to say how this man's mind works? It's a mystery.

In any case, according to Abutaleb and Paletta, after realizing their boss was evidently serious about quarantining a bunch of American tourists in a military prison, Trump's staff quickly quashed the plan. The rest, as we all know, is history.

More like this
Sarah Sanders is here for the vaccine — as long as she can credit Trump for it
By Vanessa Taylor
So weird how Sean Hannity is super into the vaccine now
By Vanessa Taylor
Trump kept a Gitmo prisoner detained for 5 extra years. Biden has finally freed him
By Rafi Schwartz
Stay up to date