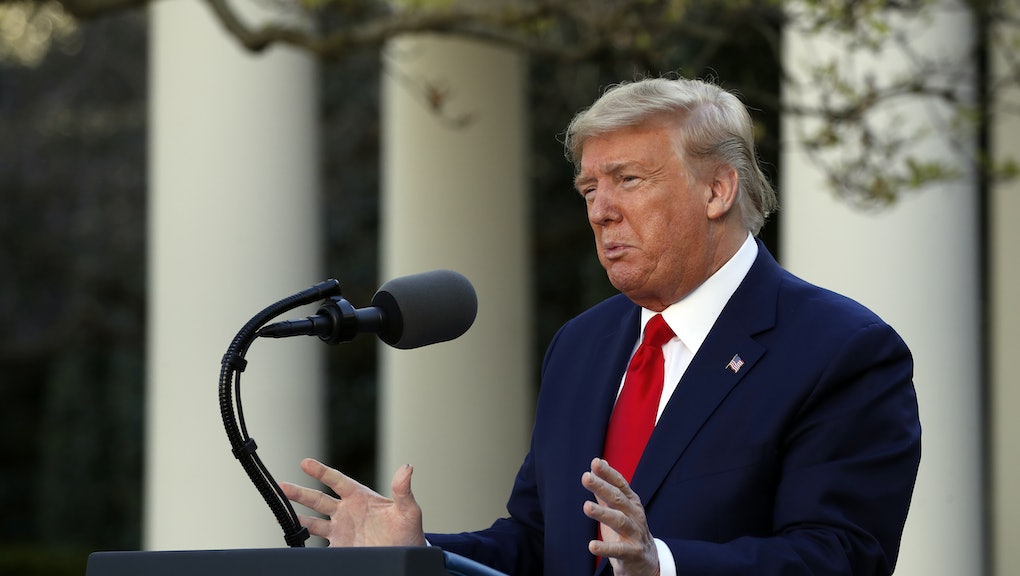 Trump's coronavirus relief efforts seem to be focused on one thing: PR

The president’s coronavirus response continues to revolve less around informing the public, and more about boasting of his accomplishments. On Monday, on a conference call with the nation’s governors, audio of which was obtained by The New York Times, President Trump declared that the country’s chronic shortage of testing — an area in which it has repeatedly lagged behind other countries like South Korea — is no longer an issue. He said that he “hasn’t heard about testing for weeks,” because the issue has been solved, he claimed. “We’ve tested more now than any nation in the world. We’ve got these great tests and we’re coming out with a faster one this week,” he said, adding, “I haven’t heard about testing being a problem.”

This claim is false — and it was certainly news to America’s governors who are still struggling to procure the necessary tests for their states. Steve Bullock, the Democratic governor of Montana, told Trump directly that “we don’t have adequate tests.” Bullock said that his state is trying to follow South Korea’s lead with “contact tracing,” in which infected individuals are traced to try and break chains of viral transmission, but it can’t do so effectively because of the test shortage.

“Literally we are one day away, if we don’t get test kits from the CDC, that we wouldn’t be able to do testing in Montana,” Bullock added on the call. (Whether or not the state has actually run out of tests as of Tuesday is unclear.)

On Monday, Washington Gov. Jay Inslee (D) told the Times that Trump was being willfully ignorant about the testing shortage. “It would be shocking to me that if anyone who has had access to any newspaper, radio, social networks, or any other communication would not be knowledgeable about the need for test kits,” Inslee said. “I can be assured that the White House knows very well about this desperate need for test kits.”

In a sign of just how much the country’s health and safety right now depends on the vicissitudes of Trump’s fragile ego, the Times also reported that while some governors on the call argued with the president’s inaccuracies, others have concluded that flattering him is a better strategy for getting the equipment they need. Trump “seeks credit and affirmation in most interactions,” the Times report observed. On the call, governors, like Democrat Roy Cooper of North Carolina, carefully phrased their requests for aid in obsequious language. “As much as you can send us is very much appreciated,” Cooper reportedly said.

Despite the threat of Trump cutting off aid if he doesn’t get his daily dose of compliments, even some prominent Republicans have become willing to undermine the president’s rosy projections. On Tuesday morning, Maryland Gov. Larry Hogan told CNN that due to a lack of testing, Maryland was “flying blind.” The state, he said, was “sort of guessing about where the outbreaks are and about what the infection rate and the hospitalization rates are.”

None of this seems to matter to the president, who appears wholeheartedly focused on little beyond his own reelection campaign and personal popularity. On Monday, Trump told reporters that on the governors’ call, the heads of state were “for the most part ... saying, ‘Thank you for doing a great job.’” He’s even gone so far as to brag about the ratings that his coronavirus press conferences have received, tweeting that the numbers are comparable to the finale of the reality dating show The Bachelor.

Trump has a way of flattening reality, like a prism in reverse. In his narrow world, everything — including a global pandemic that has already killed thousands of Americans — turns into nothing more than a PR opportunity.

More like this
Vaccines are good. Threatening to evict someone over them is not
By Rafi Schwartz
I never want Tucker Carlson to stop talking about Nicki Minaj's cousin's friend's enormous balls
By Rafi Schwartz
This poll shows just how strong Trump's hold on Republican voters is
By AJ Dellinger
Stay up to date