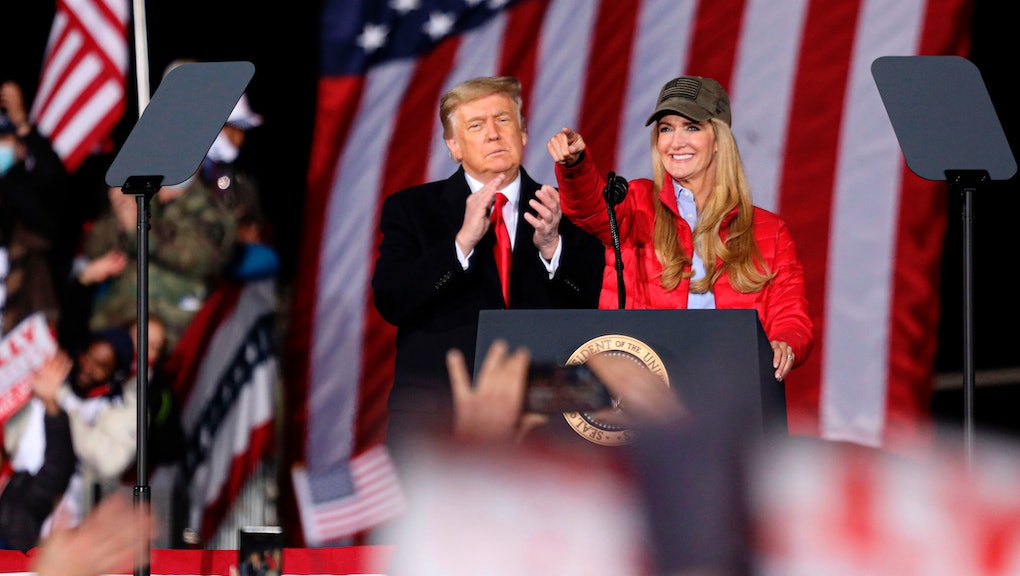 With Congress set to certify the Electoral College results on Wednesday, President Trump is waging his final battles in hopes of overturning the election. Given that his numerous lawsuits have failed, Trump is now pitting his hopes onto Vice President Mike Pence, who by nature of his position has the final sign-off on the Electoral College certification. While speaking at a rally, Trump told supporters that he hopes Pence "comes through for us" to block the certification of President-elect Joe Biden's win. The comment is a gross overestimation of Pence's power, not to mention a thinly veiled urging for the vice president to steal an election.

To certify Electoral College results, Congress meets in a joint session where the votes are counted once again. The vice president, as president of the Senate, oversees the certification process — but that doesn't mean he has any real power. As outlined by The Hill, his role is mostly ceremonial. In other words: Pence can't change the results. However, while appearing at a rally in Dalton, Georgia, on Monday, Trump suggested otherwise to his supporters.

Trump's comments came after a federal judge in Texas dismissed a lawsuit that basically wanted to grant Pence the "exclusive authority" to pick the next president. His comments also follow leaked audio of an hour-long phone call between Trump and Georgia Republican Secretary of State Brad Raffensperger, where Trump directly asked Raffensperger to "find" the over 11,000 votes needed to flip Georgia in Trump's favor.

Trump also declared at the rally that "there's no way we lost Georgia," which he did. "I've had two elections. I've won both of them. It's amazing," he added, falsely.

You could charitably read Trump's comments as him being unaware of how the certification process works. But even then, he's still asking Pence to directly disallow the will of the voters. And remember that Trump has showcased he's more than willing to disregard facts if doing so works in his favor. That means that his comments in Georgia can also be read as him laying yet more groundwork to contest the results of an election he lost: By misleading his supporters about the certification process, he will have the backing to continue railing against Biden's victory later on.

This is a tactic that Trump displayed in the months preceding the elections with his battle against mail-in voting. Despite having voted by mail himself, Trump continuously lied to his supporters — often by utilizing social media like Twitter — with false claims that mail-in voting leads to increased fraud. Right after the election, Trump was able to utilize the discontent he sowed to urge his supporters to "stop the count!" as part of his attempts to manipulate the election results in his favor.

Trump also spent part of his Georgia speech insisting he won "in a landslide" and claiming the election was "rigged" against him. Trump continues with these claims despite his own Cabinet department in November calling the 2020 elections "the most secure in American history" and Attorney General William Barr admitting investigations show there's no evidence of widespread voter fraud.