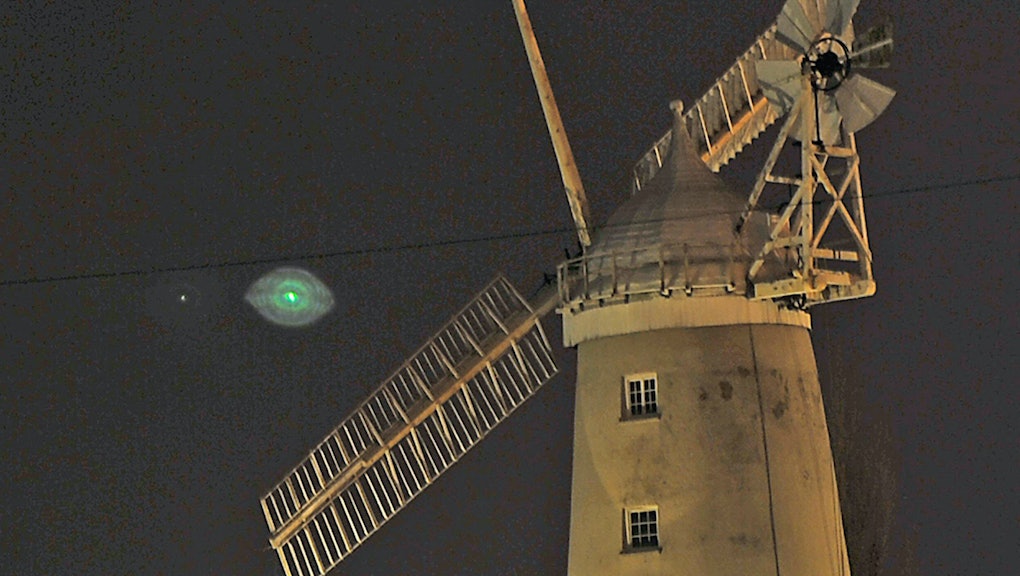 On Monday, the New York Times reported that military pilots reported frequent sightings of unidentified flying objects over the east coast. The UFOs reported by navy pilots to government officials had surprisingly consistent descriptions: aircrafts reportedly able to reach hypersonic speeds, and heights of 30,000 feet, for 12 hours at a time, leaving behind no detectable exhaust. They are inexhaustible zooming spinning tops in the sky, according to pilots who reported seeing multiple UFOs during missions between 2014 and 2015.

And what are UFOs most commonly associated with? Aliens! And while it is of course a bit of a stretch to declare that there is an alien invasion on the horizon, there haven't really been any other suggestions as to what these zooming skycraft could be.

As Navy Pilot Lt. Ryan Graves told Congress and the Pentagon, the aircraft he observed was performing feats that aren't known to be possible with our current technology:

“Keeping an aircraft in the air requires a significant amount of energy. With the speeds we observed, 12 hours in the air is 11 hours longer than we’d expect.”

The Times reports that there is an entire unit of the U.S. military dedicated to UFOs — The Defense Department’s Advanced Aerospace Threat Identification Program sole purpose is to catalogue the UFOs that military pilots encounter — and they haven't provided any answers. According to the Times, the unofficial newspaper for people who strongly believe that life exists beyond earth, the sightings have occurred frequently enough that the Navy even sent out special guidances to pilots in the event that they encounter these objects.

“We don’t know who’s doing this, we don’t have enough data to track this," Joseph Gradisher, a Navy spokesman, said to the New York Times. "So the intent of the message to the fleet is to provide updated guidance on reporting procedures for suspected intrusions into our airspace.”

And yes, of course, some experts are saying that the objects are not extraterrestrial life. Senior astrophysicist at the Harvard-Smithsonian Center for Astrophysics, Leon Golub, told the Times that the possibility that the objects are aliens “is so unlikely that it competes with many other low-probability but more mundane explanations.”

Unlikely — not impossible. As Avi Loeb, the head of Harvard's astronomy department, told the New Yorker in January, there is a possibility that life exists in other parts of the Universe.

The pilots who reported the sightings of these mystery craft do nothing to mitigate the suspicion that some smarter, more advanced life form may be among us. They refuse to speculate on what the craft could be, but the information they provide does little to ease the mind. One pilot described it as a sphere encasing a cube, and multiple pilots observed the object making stops from such high speeds that would make it impossible for a human to be operating the devices.

If the aircrafts are not being operated by extraterrestrials, the alternative is maybe even more terrifying. Aliens might just be sending speedy sky drones to gather information and figure out if democracy is something they should try to pursue. If it's humans operating these devices, someone is developing a nearly undetectable, hypersonic sky machine that can render experienced Navy pilots completely shocked. Given thousands of years of history, it seems doubtful human beings would use this technology benevolently.

In a choice between aliens and a government agency, aliens are definitely the cooler option, and probably the safer option for humanity, too — barring any Independence Day scenarios. But according to the experts (ruiners of fun, arbiters of truth) all of these sightings could just be coding bugs in the radar technology, or pilots experiencing neurological malfunctions after performing high-speed, high altitude missions.

But just in case, here's just a few notes for those UFOs, if there are actually aliens zooming around up there:

More like this
GOP Rep. Louie Gohmert has some truly appalling questions about outer space
By Rafi Schwartz
Jeff Bezos is going to space, which is the most divorced guy thing imaginable
By AJ Dellinger
NASA announces new missions to Venus, our fiery sister planet
By AJ Dellinger
Stay up to date