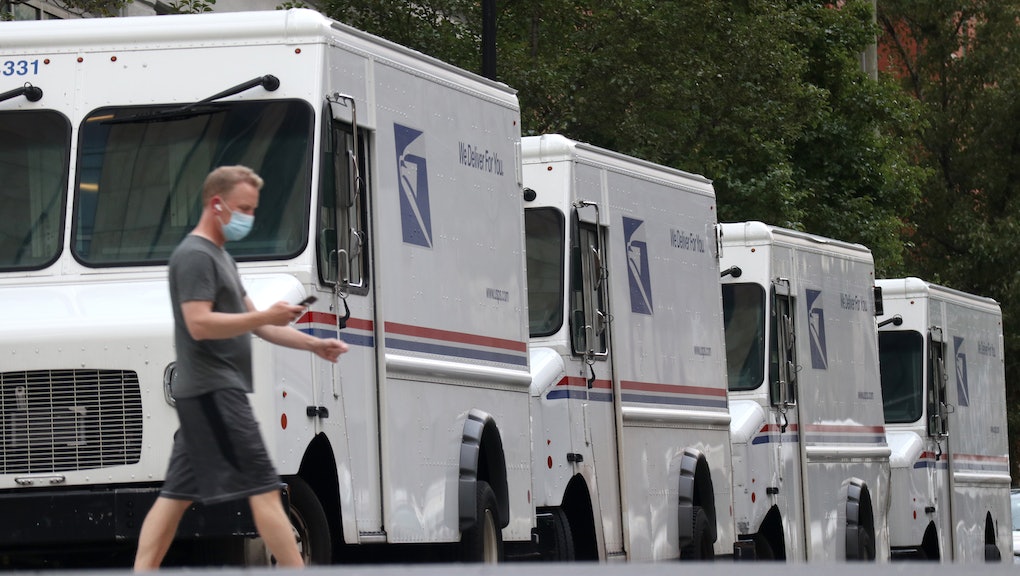 The United States Postal Service has been under attack by the Trump administration for some months now. While Democratic lawmakers in the House scramble to reconvene early and address the crisis, individual citizens are taking matters into their own hands. On Monday, a group of voters sued the Trump administration over its changes to USPS — and they aren't the only ones to have done so.

Filed in federal court in Washington, D.C., the lawsuit includes four voters from New York, Pennsylvania, Texas, and Indiana. Politico reported that the lawsuit alleges President Trump is making changes not to better USPS, but to instead prevent people from being able to vote by mail.

The claim doesn't come out of nowhere. Trump has repeatedly gone on about his distrust of mail-in voting, going so far as to incorrectly label it fraudulent — even though Trump has voted by mail himself. Last week, Trump pretty much admitted to sabotaging USPS to prevent people from mail-in voting, telling Fox Business, “Now they need that money in order to make the post office work so it can take all of these millions and millions of ballots ... But if they don’t get those two items that means you can’t have universal mail-in voting.”

The lawsuit doesn't single out Trump alone. It also names newly minted Postmaster General Louis DeJoy. Trump appointed DeJoy — a Republican party megadonor who contributed over $1 million to Trump's own campaign — a month after urging Republicans to "fight very hard" against mail-in voting. Since his appointment, DeJoy has cut overtime and implemented other changes that have alarmed postal workers.

"In short, DeJoy, doing Trump’s public bidding, has ensured even greater chaos in the fall elections, putting his thumb on the electoral scales to help ensure Trump’s reelection and/or provide grounds for an election contest — not to mention helping Trump sow doubt in the minds of Americans about the integrity of the electoral process and the outcome itself, a loathsome tactic once associated only with tin-horn dictators and banana republics," Politico reported the voters wrote in their complaint.

White House spokeswoman Sarah Matthews responded to the suit, telling Politico in a statement: "While Democrats are spreading baseless conspiracy theories about the Trump administration’s assistance to the USPS to score political points, President Trump will continue to work to ensure the security and integrity of our elections."

This group isn't the only one to sue the administration. On Monday, 17 plaintiffs from six states filed a similar lawsuit against Trump and DeJoy in a federal court in Manhattan. The New York Times reported that the suit wants to ensure the administration takes “all steps necessary and sufficient to ensure that the USPS is adequately funded” so "absentee and other mail ballots are treated equal to in-person ballots." It also asks for "sufficient staffing and overtime to handle a record level of mail voting."

More like this
This poll shows just how strong Trump's hold on Republican voters is
By AJ Dellinger
Marjorie Taylor Greene apparently thinks she can just "shut down" telecom companies
By Rafi Schwartz
Trump thinks Robert E. Lee would have been great in Afghanistan
By Rafi Schwartz
Stay up to date