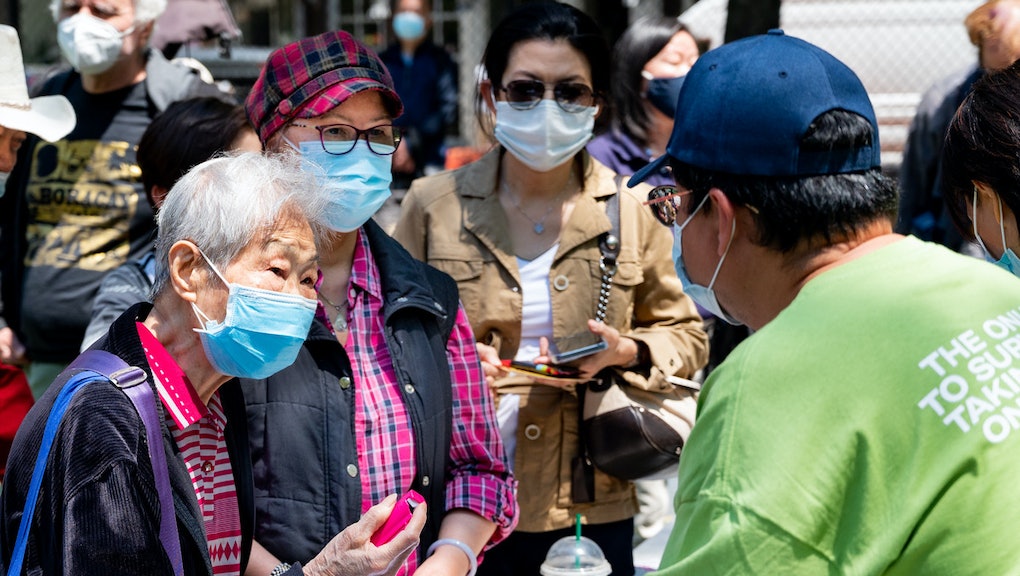 Attendees and participants at the AAPI Care Fair in May 2021 at Columbus Park in Chinatown in Manhattan, New York City. Photo credit: Sheng Lin

"We Keep Us Safe:" AAPI people are taking their safety in their own hands

On May 24, 2021, an assailant pushed an Asian man onto the subway tracks in Queens, New York. Bystanders on the platform pulled the man to safety. The victim suffered a laceration to the head and was taken to Mount Sinai Hospital Queens for treatment. One week prior, an Asian woman was spit on while riding the train in Brooklyn; an Asian man was told to “go back to China,” repeatedly punched and bitten, his finger severed in the attack; and a 23-year old Asian nurse on her way to work was assaulted, struck on her head and hip with a cane.

These are only a few instances in a huge spike in attacks against Asian Americans between March 2020 and February 2021. Between March 2020 and February 2021, reports of anti-Asian incidents skyrocketed to nearly 4,000 cases, according to Stop AAPI Hate; and the first quarter of 2021 saw a 169% increase in attacks against Asian Americans, according to California State University’s Center for the Study of Hate & Extremism. NYPD data shows that from January 1 through May 31, New York City has recorded 87 hate crimes against Asians, compared to 20 for the same time period in 2020. While many people are excited to get back outside as vaccination efforts rise this summer, many Asian Americans fear for their lives.

President Biden signed the COVID-19 Hate Crimes Act into law on May 20 to investigate and review hate crimes, create new hotlines, train officers, and educate the public about anti-Asian bias. But many members of the AAPI community aren’t waiting around to see if that will make any substantial change.

Asian Americans in medicine, fashion, design, food, film, and more are stepping up to help each other. Across the U.S., people are raising money and providing mutual aid to victims, their families, and the most vulnerable to keep the community safe, fed, and supported in a time when we can’t rely on the government to do so.

After the mass shooting in Atlanta that left six Asian women dead, three AAPI business owners — Arati Rao, cofounder of the rug company Tantuvi; Jenny Nguyen, owner of the public relations collective Hello Human; and Jean Lee, who runs Ladies & Gentlemen Studio — raised close to $45,000 for the families of the victims through the campaign #DesignForATL, which was organized in less than a week. “I understand why people immigrate to the states; people work so hard to be here and build a good life,” Rao tells Mic. “For that to be taken from all those families saddened me — to care so little for life — it was too much.” The fundraiser brought together more than 100 designers and consultants who donated strategy sessions; a custom PR toolkit and objects like lamps, photo prints, and jewelry; all of which were raffled off on social media. The proceeds were then distributed by the Atlanta-based civil rights group Asian Americans Advancing Justice. “We are so happy we were able to bring so much awareness to the needs of the families affected by the awful attack,” Rao says. “It definitely exceeded our expectations.”

While the #DesignForATL fundraiser provided support following a horrific attack, other grassroots efforts have aimed to help the most vulnerable in the community — particularly Asian women and Asian elders — feel safe and prepared to defend themselves. It feels necessary to some Asian Americans, when police initiatives like the volunteer-based NYPD Anti-Asian Hate Crimes Task Force are in reality “a toxic plan that’s being imposed on our communities for the NYPD’s public relations goals,” said Joo-Hyun Kang, the director of the Communities United for Police Reform.

In early April, Madeline Park started Cafe Maddy Cab, an initiative that pays cab fare for AAPI who feel unsafe taking public transportation in New York City. “I know very well what it feels like to be an Asian woman in the subway these days,” Park, a Brooklyn-based dentist, tells Mic. “I also know what it's like to be forced to take the train or walk even if I'm scared, because I can't afford the cab fares.” Two days after her first Instagram post about Cafe Maddy Cab, she raised more than $100,000; in less than two months, she raised nearly $200,000 and provided nearly 3,500 rides to Asian American women, elders, and LGBTQ+ individuals.

Park’s isn’t the only initiative that has focused on helping Asians feel safe on the streets. Michelle Tran, a medical and graduate student, and Kenji Jones, a digital marketer working in fashion, met online after discovering that they were both organizing to provide pepper spray to AAPIs who felt unsafe on the streets and on public transportation. Since then, they’ve worked together to fundraise and purchase pepper spray, whistles, kubotans, and personal safety alarms to donate to AAPI communities in New York City, prioritizing elderly, low-income, women, sex workers, essential workers, and LGBTQ+ individuals. “Kenji and I were both disturbed by the rise in anti-Asian hate crimes and were tired of feeling helpless watching news clips of elderly Asians and Asian women being violently attacked on the streets,” Tran, who had previously formed Soar Over Hate (Jones joined the organization soon after) to distribute the items in NYC neighborhoods, tells Mic. “We both were moved to start grassroot initiatives of our own, raising money to purchase self-defense materials.” Tran says that while she hasn’t heard of people having to use the devices yet, some elderly Asian Americans do not leave their homes without them; carrying the spray and alarms makes them feel more safe. If, at least, the devices function as a talisman for protection, then they have done their job.

But for Tran, Jones, and so many other members of the AAPI community coming together right now, supporting each other isn’t just about preventing and responding to tragedy. It’s also about fostering joy and healing. Tran and Jones recently organized the AAPI Care Fair, which took place on a sunny afternoon in mid-May at Columbus Park in Manhattan’s Chinatown. The free event centered “joy, healing, health and safety” for the community through puppy therapy, live music, distribution of PPE, self-defense devices and courses, housing justice and immigrants’ rights resources, and many other necessities. Tran and Jones enlisted more than 150 volunteers and collaborated with 11 community organizations to make the fair happen. More than 2,000 people attended. “Michelle and I were so glad that we could provide such a wide breadth of services and resources,” Jones tells Mic. “We saw the community come together to lift up the most underserved folks. We are excited that so many — especially young people — came out to volunteer and give back. People are realizing that we can all do our part to protect Asian lives and lift up our community.”

Eunice Byun, CEO of the AAPI-founded cookware company Material, also sees the need for action from our country’s leadership — especially after the past year. “Not only are our elders dealing with fear and loneliness because of Covid, but they are [also] afraid to walk out because of the violence that is starting to take root,” Byun tells Mic. Material has a history of donating to local organizations that combat food insecurity, and Byun recently fundraised for Heart of Dinner, which delivers hot lunch and fresh produce to elderly Asian Americans in New York City every Wednesday; she also recognizes the need to help all BIPOC communities. “We are living in a world where previous leaders and administrators made it okay to use hateful language — and even worse, supported violent acts towards groups of people they deemed ‘not like them,’” she says, adding that it’s important to protect all BIPOC communities, not just Asians.

Marching in protests against police brutality and systemic racism, the chant “Who Keeps Us Safe? We Keep Us Safe!” is often heard as a rallying cry for those who believe in community organizing as an antidote to the carceral state. For those of us within the AAPI community, there is no time to wait for help to arrive. We have to keep us safe.

More like this
The 2021 Olympics have their problems, but athletes still need our support
By Adam Aziz
Steak-umm, the social justice warrior no one asked for, tweets fire once again
By Joseph Lamour
Simone Biles and Sunisa Lee just proved gymnastics can evolve meaningfully
By Kara Weisenstein
Stay up to date