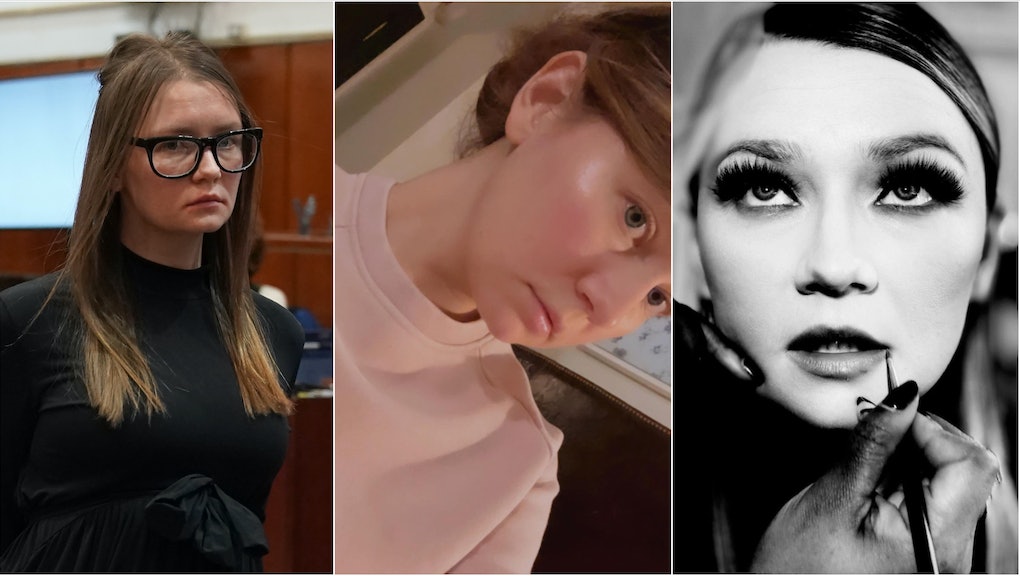 L: Anna Delvey at her sentencing in 2019 (TIMOTHY A. CLARY/AFP via Getty Images) R: Post-prison selfies on Delvey's Instagram

We've reached the age of scamfluencers

Scammers aren’t new or anything. Think of old-timey salesmen hawking snake oil, or that guy from the musical who sells a whole town imaginary band instruments. But scams are more visible in the digital age, when the internet makes it both easier for a fraudster to fool people and also more likely they’ll get caught. When they do, social media pushes their outrageous stories into our consciousness — and quite frankly, we can’t get enough.

Remember the “summer of scam” in 2018? Within a three-week span, Jessica Pressler published an instantly iconic feature in New York magazine on Anna Delvey, the fake German heiress who was then awaiting trial on Rikers Island for swindling hotels, banks, and Manhattan's elites into believing she was worth millions. John Carreyrou published Bad Blood, a biography about Theranos swindler Elizabeth Holmes. And Jia Tolentino published a feature on “Grifter Season” in The New Yorker: “At some point between the Great Recession, which began in 2008, and the terrible election of 2016, scamming seems to have become the dominant logic of American life,” she observed.

While living through 2021 certainly feels more chaotic than 2018 — considering the pandemic, racial injustice, and climate change — our love affair with scammers is still going strong. Except now, some of the grifters whose implosions we fixated on a few years ago are emerging on the other side of their scandals. A few even appear to be successfully parlaying notoriety into actual celebrity.

Take Delvey — whose real name is Anna Sorokin — who was convicted of stealing an estimated $275,000 in 2019 and spent almost four years behind bars, all told. She was released on parole on February 11 and didn’t waste any time getting back to her lavish antics, posting photos of herself indulging in caviar and champagne in a hotel bathtub on Valentine’s Day, for example.

Nonetheless, Sorokin seems to be using social media as a tool for rehabilitation. Her bio reads: “Reinventing Anna,” which might as well be the title of the vlog series she's actively filming to “reclaim the narrative” around her reintegration back into society. Netflix paid Sorokin $320,000 to adapt her story into a forthcoming series starring Ozark’s Julia Garner, but she spent almost all of it on restitution, fines, and attorney’s fees.

Yet Sorokin has other potentially lucrative ventures in the works. She self-published a series of essays while incarcerated, bragging on Twitter the day she was released: “I write better shit from a prison cell in a day than some of these bitches with 50 editors do in a year.” One of her projects was a letter to Harvey Weinstein. “Being criminal and famous like we are […] isn't all fun and strangers sending you pounds of caviar,” she wrote to the convicted sex offender, in a long and meandering treatise on how the privileged finagle a lavish existence on the inside.

The list of scammers who’ve captivated us in recent years goes on and on: There’s Holmes — now the subject of a book, podcast, HBO documentary, and Hulu original series — who’s awaiting trial on charges of “massive fraud.” Billy McFarland is currently serving a six-year prison sentence for his role in Fyre Fest, which was detailed in dueling 2019 documentaries. Sorokin is the first of her “class” to finish paying her debt to society and begin mounting a comeback. It’ll be interesting to see how she’s received when the paparazzi frenzy around her release dies down.

Perhaps the comeback of another "scammer," Caroline Calloway, could serve as a blueprint of sorts. (I use quotes around the epithet, because in hindsight, her transgressions are small compared to convicted grifters like Sorokin or McFarland.) Basically, Calloway amassed a following by embellishing her personal lore, frolicking around austere universities with blonde hunks like the protagonist of a Donna Tartt novel. Then she sold a memoir based on the life she’d constructed, failed to write it, and blew the whole advance.

In late 2018, Calloway was accused of throwing a Fyre Fest of mini proportions by selling her fans expensive tickets to “seminars” on how to be yourself. Then, in September 2019, The Cut published an essay by Calloway’s former friend and ghostwriter, Natalie Beach, who took credit for shaping the influencer’s online image and co-writing the book proposal that’d nabbed Calloway a six-figure advance.

In hindsight, the Calloway kerfuffle is ridiculously low-stakes. Back in 2019, writer Roxane Gay called it “quite a white girl journey.” A sympathetic article in The Atlantic that fall painted a picture of a woman grappling with modern pressures and mental illness, who overpromised and underperformed. You see glimmers of her in John Early's character on Search Party, a similarly privileged and adrift millennial willing to go to drastic lengths for an audience.

But something interesting happened in the wake of her scandal: Calloway chose radical transparency. She started posting whatever she wanted on social media — including on OnlyFans, where she became one of the platform’s biggest creators by doing sexy literary cosplay. This past December, Calloway announced she’d made $100,000 on OnlyFans and had used the windfall to pay back the debt she owed her publisher. (Facing criticism for siphoning revenue from sex workers, Calloway said she plans to quit the platform.)

In a meta turn of events, she’s now working on a different memoir, Scammer, about her rise to infamy. “If you build a life around an identity that springs from your own imagination, is it ever inauthentic?” Calloway wrote on her personal blog in April 2020. That's debatable. But it's certainly easier to “Gatsby” yourself in the digital age, when self-improvement is as easy as posting aspirational pixels to social media.

Influencers like Calloway and Sorokin — who’s still going by Delvey, for the record — are living proof the internet makes it easier than ever to shrug off the self you were born with and craft a more desirable persona. And even when you get caught, social media makes it possible to keep tweaking the narrative.

We’re not going to lose interest in scam stories anytime soon either, with so many Hollywood projects in the works about them. Grift makes for compelling entertainment — just look at films like Hustlers, Catch Me If You Can, and the entire Oceans franchise. But framing hucksters as aspirational antiheroes probably isn't good for us, neuroscience professor Patricia Riddell told Metro.co.uk. Our obsession with scammers, she said, may “demonstrate a lack of compassion in our society that isn't entirely healthy.”

Still, we live in the era of Gamestop “stonks,” when there’s a lot of public glee in seeing elites get duped by nobodies. The internet has both democratized our access to influence and made it more acceptable to fudge reality in pursuit of power. It makes a twisted, modern sort of sense that we'd absolve scammers and pay them rapt attention instead. On the other side of their respective scandals, Sorokin and Calloway both seem to be getting what they always wanted.