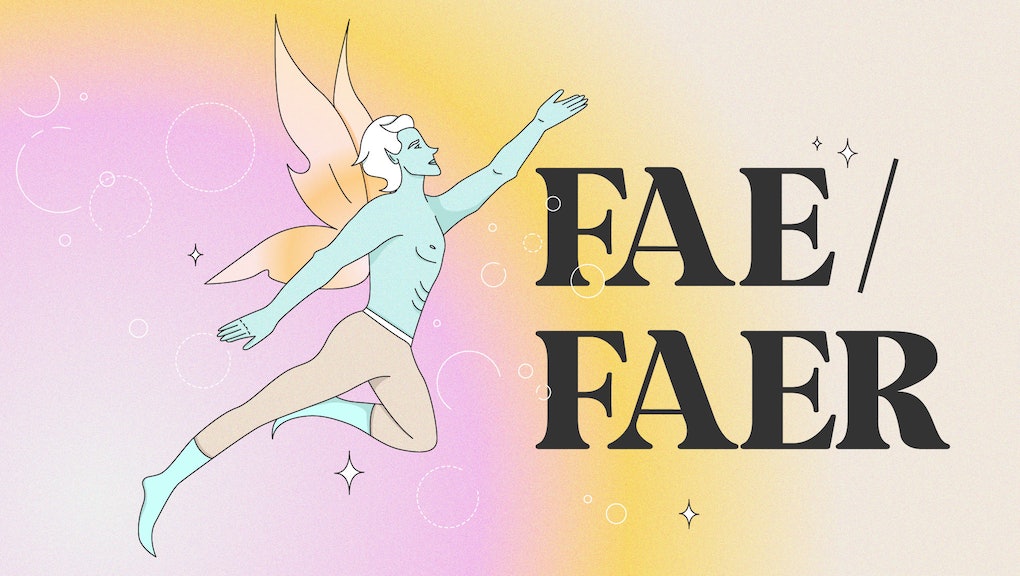 What are neopronouns and how do they honor identity?

“Hi, my name is Tangerine, I live on Abenaki land, and I use gho/ghost pronouns,” someone said recently at queer online meet-up. Wait, what? Look, people using colors as names and acknowledging the native people of the land they live is totally normalized to me, but this ghost pronoun business? Well, it felt a little sandpapery. Let me get this straight: Your gender is ghost? Whatever happened to zim and zers? Are we not doing that anymore? Have I aged out of queer culture entirely? The whole subject of neopronouns makes me feel awkward and ancient, but I don’t want to go out like that, so I decided to investigate.

It turns out that using neopronouns — pronouns that mark a person’s identification with objects, magical creatures, or other non-human living things — despite the neo-moniker, is actually not a new idea. Humans have been trying to find innovative ways to signal their singularity for hundreds of years. Recently, pronouns that indicate trans, gender non-conforming, and non-binary identities have become more accepted. Most people are on board with evolutions in language that feel like the revolution, but some of us are not quite sure what to do with neopronouns. We may wonder how identifying as a ghost or a bug is progress. Well, despite our curmudgeonly confusion, I think it’s time we stop side-eyeing neopronouns and welcome them as part of the ensuing gender revolution.

To be clear, neopronouns may or may not have anything to do with gender, depending on the individual. What neopronouns do is ask people to reconsider the assumptions that we make about identity. It turns out that some people don't identify as people at all, and they use neopronouns that express their very individualized identities. Some, for example, identify more with kittens than they do with humans, and they want to be addressed as such. Put in context, that means that if you’re referring to someone who wants to be recognized in all their kittenish glory, you might say something like, "Wow, Kat is really feeling kitself today."

Even though identifying with cats may not seem like it has anything to do with gender, using any pronoun outside the binary questions the very idea of gender. Why? Because he and she have been dominating language since forever, and not using them inherently questions their hegemony. “I've never felt like the gender I was assigned at birth, nor like an ‘opposite’ of that gender,” Willow Stevens, a 36-year-old artist who uses fae/faer — as in fairy — pronouns, tells me. Stevens identifies as agender, but says fae never felt right with the usual pronouns. “The default ‘they/them’ didn't feel like me. I discovered the fae/faer pronouns and felt an instant connection,” fae explain.

Stevens, like some other individuals who use neopronouns, don’t feel like using neopronouns has anything to do with choice. Fae feel that neopronouns are identity markers that simply need to be respected. “They are my pronouns — no different than a cis man using he/him,” fae says, “They just are.” As a nonbinary person who has a constantly evolving relationship to gender and identity, I can relate to the idea that identities — and the pronouns we use to describe them — should be considered valid.

Psychologists agree that it’s important to respect peoples’ desire to be seen and addressed in ways that express their identity. “We should honor anyone's chosen pronouns by using those pronouns rather than pronouns we prefer,” says Taryn Myers, a Virginia-based psychotherapist and professor of psychology at Virginia Wesleyan University. “People choose to use neopronouns because the existing pronouns, even they/them, do not fit for them. Neopronouns create comfort and a sense of belonging for that person,” Myers says.

That’s understandable, but the complex part is executing this. I have always internally identified as gender non-conforming, but it felt like the English language — and American culture — wasn’t set up to accommodate that identity, so I used she/her pronouns for most of my life. A couple years ago, I switched to she/they. That didn’t feel right either, so last year I started using they/them. But unlike Stevens, every time I change my pronoun usage, I feel like I am making a choice, and it feels like an important one.

“If my trans friends are still fighting just to be gendered properly, it can feel to them like mocking to demand to be called a vampire for the ‘same’ reasons."

Using they/them pronouns is a way of challenging the binary status quo. And every time I ask someone to respect that, I know that I am asking them to rethink their relationship to the status quo and the cultural assumptions we’ve all been taught to make. I mostly think that any defiance of the dominant paradigm is useful, but sometimes I wonder if what I am asking of people, in some way, takes something away from those with more marginalized identities. Who am I, after all, to insist upon they/them when so many more stigmatized trans and gender non-confirming people are still fighting to be recognized and honored in their identities?

“If my trans friends are still fighting just to be gendered properly, it can feel to them like mocking to demand to be called a vampire for the ‘same’ reasons,” says Stefani Goerlich, a Detroit-based psychotherapist. Still, she says, honoring neopronouns is a small linguistic gesture that could make someone feel a lot better about themselves and the world. “Regardless of one's personal feelings around these new creative terms, our response should always be based on kindness and courtesy,” says Goerlich. “It doesn’t injure me to know that my coworker Henry prefers to be called Hank. Likewise the same courtesy should be extended to my colleague Gia, who prefers zie rather than she.”

But do neopronouns like vamp and kit take something away from the social, legal, and political battles trans people are facing? Goerlich is definitely not trying to make that kind of grandiose statement. What she is sure of is that we all deserve affirmation. “We all want to be affirmed as unique individuals in an increasingly homogeneous world,” she says. It does become difficult, though, Goerlich says, as the number and scope of preferred terms expands, for the traditionally-minded to be clear about which signal a genuine respect for gender diversity and which are more akin to a favored nickname.

For individuals, be they vamps or kits, using the right pronouns may feel playful or it may feel serious. “I have been asking my friends and family to work on their usage of my pronouns and I beam every time they get it right,” Stevens says. When people get faer pronouns right, fae say, “I just feel all around better about myself, finally knowing who I am and being allowed to be myself.” We all deserve that feeling, even if it feels awkward to conjugate. But let’s not forget — or stop fighting for — the trans people who came before us and made this conversation possible.

More like this
Separation anxiety is real for couples who quarantined together
By Tracey Anne Duncan
A suicide safety plan saved my life. Here's what it looks like, and why it worked
By Kimberly Zapata
People are cutting themselves on TikTok. What are we going to do about it?
By Tracey Anne Duncan
Stay up to date