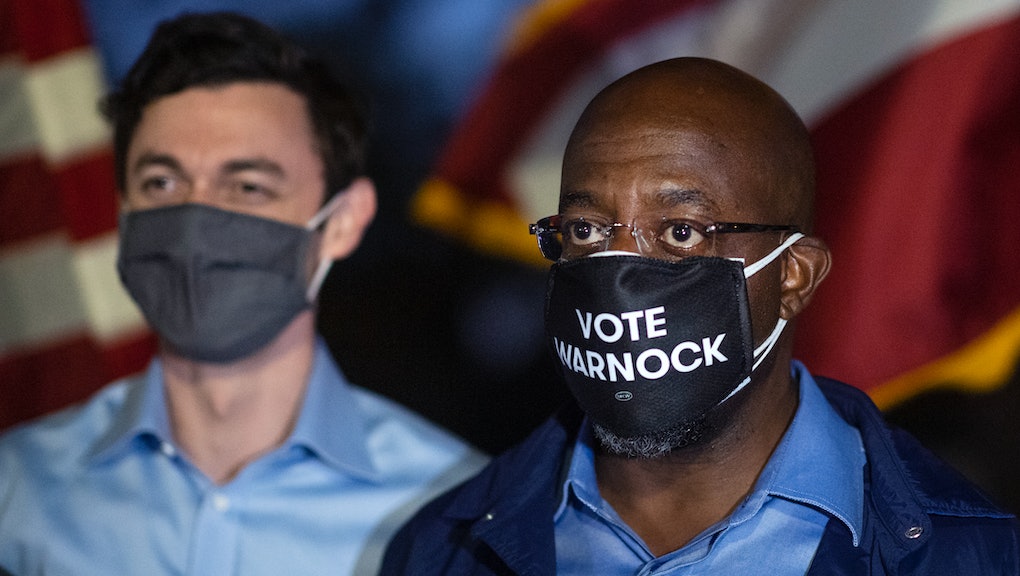 What Democrats can learn from Black voter turnout on Election Day

In addition to the presidential race, Election Day also decided the fate of dozens of political seats and progressive ballot measures at the local, state, and federal level. In the aftermath, the race for Georgia’s two Senate seats has risen to the spotlight, as Peach State voters will be able to participate in not one, but two special runoff elections set for Jan. 5, 2021. Georgia’s Senate races will be the Democratic Party's last chance to flip the Senate to a Democratic majority this election cycle. And in an especially prescient twist of fate, the deciding factor for that Democratic Party win will likely be — once again — whether Democrats can effectively mobilize Black voters in the state.

Despite historically leaning Republican, Georgia has become a legitimate battleground state, and grassroots community organizers have spent the last several years mobilizing progressive Black voters to get to the polls. Much of the energy swelled after Stacey Abrams narrowly lost her 2018 bid for Georgia’s governorship, but southern states have a long history of grassroots organizing around electoral politics that dates back to the Student Nonviolent Coordinating Committee, Fannie Lou Hamer, and the legendary Freedom Summer of 1964.

Now more than five decades later, and after voting for the Republican candidate in the last six presidential elections, it appears that Georgia voters have finally “flipped blue” and delivered the state to former Vice President Joe Biden. But with the race for the Senate still very much ongoing, Democrats would be wise to dig into the details of turnout in Georgia. The numbers reveal some surprising nuances — and if Democrats want to win back the upper chamber, they should pay attention.

The state’s unexpected flip in the presidential race is attributable largely to Georgia’s progressive Black voters and the grassroots organizations who successfully organized their base to turn out in record numbers on Election Day. However belatedly, the Democratic Party seems to finally be putting in real work in Georgia. It would be poetic if I weren’t so incredibly tired of seeing the Democratic Party rely on Black voters when convenient, only to dismiss our concerns as “identity politics” when we’re not.

So can the Democratic Party turn out Black voters again, in a non-presidential election cycle? Can the grassroots organizers and community organizations who door-knocked in communities around the state turn out Black voters for a party that has failed to show up for them? Or will Democrats once again take their Black support for granted?

If the most recent polling data is any indication, turning out enough voters for the second time in two months to win both Senate seats might be an uphill battle. The overwhelming turnout from Black women voters across the country and the fact that 91% of them voted to get rid of Trump has been — and deserves to be — one of the biggest stories of 2020 election. Black women’s track record of not only showing up, but being consistent in their allegiances at the polls, has made them an overlooked but demonstrably powerful electoral force for the Democratic Party.

But when it comes to voter engagement, turnout, and actually casting a ballot for a specific candidate, Black men differ in their habits. According to Pew Research Center, 64% of Black women said they voted in the 2016 presidential election, compared to just 54% of Black men. That same year, the gap between white women voters and white male voters was just 3 percentage points. Recent years have also seen a widening gender gap between Black women voters who identify as a Democrat versus Black men who do the same; in 2018 and 2019, Pew reported that 87% of Black women and 77% of Black men identified as Democrats.

The stakes are extremely high here for a Democratic Party eager to take advantage of recapturing the presidency.

It's hard to know whether those same voters will return to the polls in two months. Typically, turnout drops in non-presidential election years, but a highly mobilized electorate in a state that has been at the center of the political universe for a week, it's entirely possible engagement stays high. But it's worth asking how community organizers — or, dare I say, the Democratic Party itself — could reach even a portion of that 19% of Black male voters to vote for a Democrat instead come January. That's a lot of votes left on the table, and from a demographic (Black voters) that Democrats tend to take for granted. What might a little actual targeted outreach yield?

To be fair, there are plenty of reasons for the difference in voting habits between Black men and women. My own opinion on the matter is complicated; as a Black woman myself, the stakes often seem too high to sit out an election, so I vote for the party that at least seems committed to some kind of change, however slow and insufficient, as opposed to one that seems at best indifferent and at worst hostile to my interests. But that's not going to explain why and how every Black voter votes. And the gap between Black men and Black women voters is hardly to blame for Democratic losses when you consider how many white people, and especially white women, stayed steadfast in their support for President Trump and his ilk.

Georgia’s two Senate races are between Democratic candidate Rev. Raphael Warnock and Republican Sen. Kelly Loeffler, and between Democratic candidate Jon Ossoff and another incumbent Republican, Sen. David Perdue. If the Democrats win both Senate seats, that would guarantee the 50-50 Senate breakdown that would allow Vice President-elect Kamala Harris to act as the deciding vote for the legislative body if needed. The stakes are extremely high here for a Democratic Party eager to take advantage of recapturing the presidency, given how obstinate a Republican Senate is poised to be.

Suffice it to say, Georgia organizers and campaign workers will be working overtime to register new voters and turnout their base for the January showdown. And if Democrats are really serious about building their base and showing up for the Black voters who delivered them the White House, they'll take a look at the story the numbers from Election Day tell — and figure out how to write a winning sequel.

More like this
Universal basic income: Why doesn't the United States have it yet?
By Rafi Schwartz
Biden has hit his 100th day in office. So what's next?
By Rafi Schwartz
"Radical love in action": How organizers supported vulnerable Muslim communities during Ramadan
By Vanessa Taylor
Stay up to date