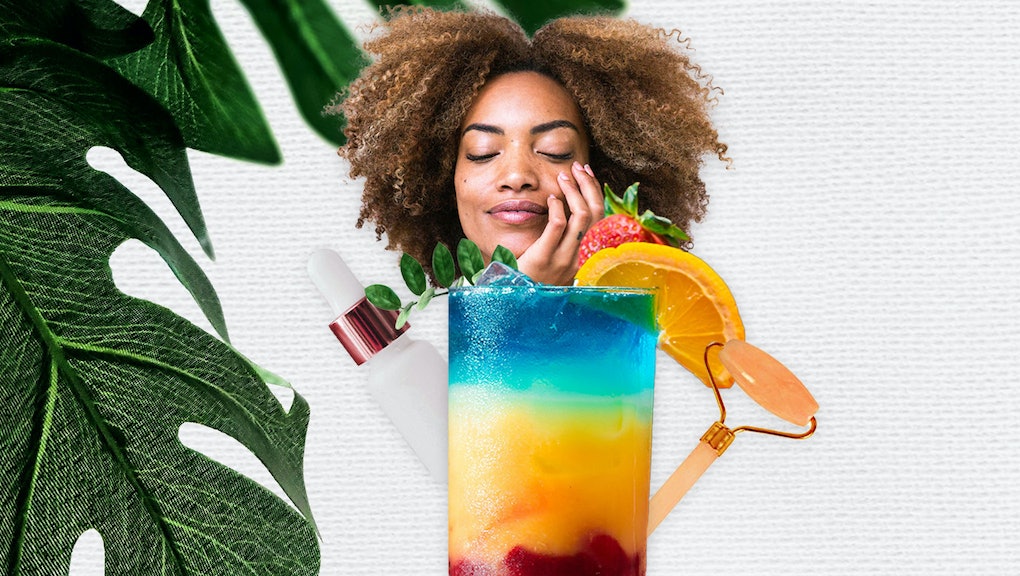 What does alcohol do to your skin?

I’m a former party girl who frequently passed out in a full face of makeup, waking up with mascara flaked onto my puffy under-eye circles and flaky cheeks. This lifestyle — and the alcohol — took a toll on my skin. Serums, toners, and sheet masks were a temporary fix for the underlying issue — too much alcohol and not enough hydration. And while there’s a billion-dollar industry built on skin care that effectively tricks us into thinking we have to empty our wallets for a fountain-of-youth-drenched face, I rebelled by trying something free: going sober.

Hear me out, because sobriety’s got levels. There’s a whole movement fueled by people who have changed their relationship with alcohol — and it’s more about intention than cutting booze out cold turkey (while, of course, that’s the best option for some people). As people embark on their sober curious journey, a metaphorical magnifying glass is placed on their relationship with alcohol.

Intuitive drinkers pay attention to when they really crave a drink — and why they do — instead of mindlessly consuming while watching TV or going out with friends. Whichever sobriety route you choose though, it’ll most likely have a positive effect on your skin, since alcohol impacts (and often counteracts) our beloved skin care routines. Here’s the science behind how alcohol gets in the way of your best skin.

You know when you’re out for a night of debauchery and you “break the seal,” a.k.a. open up the proverbial floodgates to the porcelain throne? That happens because alcohol is a diuretic, which means it increases urine production. “Losing fluids leave you in a dehydrated state,” Suzanne Friedler, fellow of the American Academy of Dermatology, tells Mic. “Alcohol also suppresses the immune system, which can make you more sensitive to the sun and prone to sunburn, which also dehydrates the skin.” Aside from how it messes with the rest of your body, this dehydration can leave our skin with that sunken-in look, especially the morning after a long, boozy night.

Scientists haven't nailed down exactly why hangovers are the worst, but we can safely deduce that that dehydration plays a part. The loss of electrolytes play a big part in how you feel and look.

And then there's what hangovers to do your regular day: Whenever I felt like trash the morning after a whiskey-fueled bender, I skip my morning workout, opting for minimal activity and greasy takeout instead. It turns out there’s a scientific reason for that. The presence of galanin, a neuropeptide linked to our cravings for fatty foods, is believed to surge as we consume more alcohol. While there's no evidence that junk food contributes to acne, touching your face with greasy hands can irritate any existing conditions. Also drinking messes with both the quality and quantity of your sleep and good sleep is crucial to healthy skin.

As it turns out, some type of alcohols are believed to be worse perpetrators than others when it comes to hangovers. “Dark spirits, like rum and whiskey, contain chemicals such as methanol that make hangovers worse, leading to further aggravated skin from increased dehydration,” says Howard Sobel, founder of Sobel Skin and dermatologic Surgeon at Lenox Hill.

What you mix in matters

Just like the fun cocktail ingredients might make you feel sicker in the morning (hello, cheap strawberry margarita mix), mixers or any liquor mixed with soda are also believed to affect your skin. “Alcohol is already inflammatory,” Friedler says. “Sugary mixers or salt-rimmed cocktails can increase that inflammation and bloating.”

“It is better to drink clear spirits such as tequila and vodka as they have fewer additives and therefore have a less severe impact on the skin,” Sobel says, noting it’s still important to limit intake. “Any more than two drinks or so a day may cause damage. Alcohol affects the mucous membrane in the pancreas and liver, causing the body to drain all fluid out of skin cells.” This is what you can feasibly blame for those ruddy post-brunch cheeks and bloating.

To me, skin care is one of the best and most underrated reasons to reevaluate your relationship with alcohol, especially if you’re one of those people who puts a lot of effort into upkeep. In an era where influencers hawk tantalizing serums and “transformative” products, good skin is about your lifestyle: adequate hydration, sleep, and as challenging as it might be, regulating how much alcohol you consume.

This article was originally published on May 7, 2021