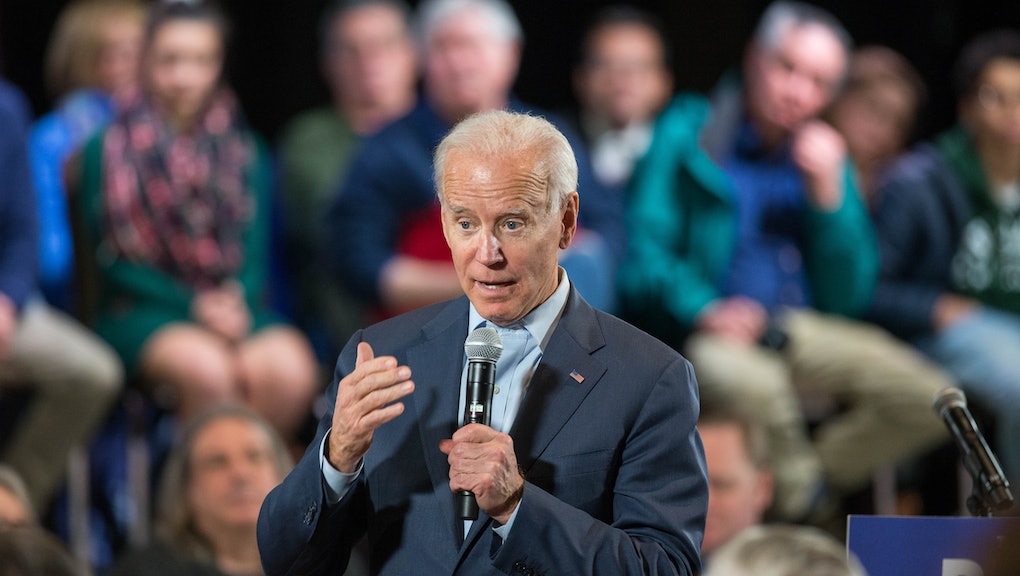 What exactly is Biden's view on abortion? A look at his less-than-consistent record

Former Vice President Joe Biden is running for president for the third time in his political career, which spans five decades. In 1972, Biden moved from his position as New Castle County council member to upstart U.S. senator — the youngest ever from Delaware — a position he won after narrowly beating out an establishment Republican more than twice his age.

Once the young man from a small state, Biden is now a household name. And after serving in the White House alongside former President Barack Obama, his views on everything from health care to unions and sexual assault prevention are well-known to the public. But there's one mainstay issue on which it's hard to pin Biden down: reproductive rights and abortion access.

As Biden's political career has progressed, the national discourse around reproductive choice and abortion access has shifted dramatically — after all, he was elected before the Supreme Court handed down its landmark ruling on Roe v. Wade in 1973, which protected access to abortion under the 14th Amendment of the Constitution. Since then, the Supreme Court's 1992 ruling in Planned Parenthood v. Casey has allowed states to slowly chip away at clinic and abortion access, which has in turn polarized the debate around reproductive health care.

For most candidates, abortion is now less of lightning rod and more of a litmus test. Most Democrats will say that they are the pro-choice party. Democrats also tend to believe that religious practice can coexist with pro-choice values: Hillary Clinton and her 2016 running mate, Virginia Sen. Tim Kaine, are devout Methodist and Catholic, respectively. Yet for them and other pro-choice advocates, a personal relationship with God should not dictate another person's health care.

Biden though, has has steadily tried to toe the line between his moderate, religious instincts and a Democratic Party whose base is moving increasingly leftward. As a practicing Catholic, he's often cited his faith as determining factor in his approach. But in the past calendar year alone, as Biden has fought for the Democratic presidential nomination, the former vice president has reversed his position a few times.

Below is a condensed timeline of Biden's public statements and votes on abortion rights, so you can trace his trajectory for yourself.

Biden is sworn in as the Democratic senator from Delaware. A year later, in 1974, Biden said in an interview that he believed Roe v. Wade "went too far."

1977: Comes down against federal funding for abortions

In this 1977 letter addressed to a "Delawarean," Biden states that he does not support federal funding for abortions unless the "life of the mother is in danger." He also voted against an amendment that included exceptions for cases of rape and incest.

1981: Votes against exceptions, for the Hatch Amendment

Biden votes against exceptions for rape and incest in federal funding for abortions through Medicaid and votes for a failed amendment put forward by Sen. Orrin Hatch (R-Utah) that would allow states to overturn Roe.

1986: Says "abortion is wrong from the moment of conception"

Biden tells the Catholic Diocese newspaper that "abortion is wrong from the moment of conception."

In 1995 and 1997, Biden votes in favor of the partial birth abortion ban (and votes in 1996 to overrule President Bill Clinton's veto of the legislation, which did not ultimately pass). Partial-birth abortion is not a medical term and was coined by the National Right to Life Association, an organization that works to restrict reproductive rights. The phrase refers to complex termination procedures typically performed after 20 weeks of gestation, which are very rare.

Biden continues to support restrictions on federal funding for termination services through Medicaid through his vote on Abortion Funding Amendment, allowing only for exceptions in instances of rape or incest or when there's risk to the life of the mother.

It wasn't until the late 1990s and early 2000s when Biden's stance on abortion began to change, at least in public. Around this time, he began to fall in line with other Democratic lawmakers, voting in 1999 in favor of an amendment that expresses support for Roe — but critically, this was an amendment to a bill sponsored by Republicans that banned surgical abortion procedures typically used after 20 weeks of pregnancy.

The Hyde Amendment, which since 1976 has restricted the use of federal funds to provide abortions, is probably the most well-known metonym for an elected official's stance on reproductive rights. The law was most recently updated in 1994 yet is still very much part of the Democratic ethos. Few senators and representatives publicly oppose the legislation — let alone vehemently so — and some prominent Democrats, including Reps. Dan Lipinski (Ill.) and Henry Cuellar (Texas), appear to still support its ban on federal funds for abortion. The lack of funding primarily harms poor people seeking abortions, who are disproportionately Black or brown.

In the late '90s and early 2000s, the Hyde Amendment did not take up as much political space as it does in 2020. Still, Biden's shifting perspective on the law is a telling sign of his struggles to stay on-message when it comes to reproductive rights generally. "Vice President Biden has fought for women’s right to choose throughout his career," Adonna Biel, deputy national press secretary for the Biden campaign, told Mic in an email.

In a Hardball interview, Biden says, "I do not want to see the [Roe] decision changed. But if it is changed, you would find 35 states tomorrow providing for the same kind of protection Roe v. Wade does. But if you change this thing called the nondelegation doctrine to say the EPA can't determine what is clean air and clean water, then what you've done is, you've condemned my kids to an environment where the powerful will determine the outcome of their health."

He continues: "One is able to be partially rectified, at least," referring to his argument that were Roe to be overturned, states could simply pick up the slack. "The other" — clean air protections — "can't be rectified at all."

2007: Reiterates his opposition to public funding for abortion

During a Meet the Press interview, Biden says, "I still am opposed to public funding for abortion. "It goes to the question of whether or not you’re going to impose a view to support something that is not a guaranteed right but an affirmative action to promote," he says.

Biden votes for the Indian Health Care Improvement Act, along with 82 other senators, which prohibits federal funds from being "used to perform abortions, except in cases in which the pregnancy resulted from incest involving a minor or rape, or in cases in which an abortion is medically necessary to save a pregnant woman's life."

2010: Works to whip votes for Obamacare

While Biden was reportedly not initially supportive of Obama's plan to pursue an overhaul of the American health care system right away, he eventually played a key role in getting the votes needed to pass the Affordable Care Act (ACA). The ACA expanded access to contraceptives, guaranteed coverage for maternity care, provided coverage for survivors of intimate partner violence, and banned "pre-existing conditions."

During a 2012 vice presidential debate, Biden explains how his faith informs his stance on abortion: "My religion defines who I am. ... With regard to abortion, I accept my church's position that life begins at conception. That's the church's judgment. I accept it in my personal life. ... I do not believe that we have a right to tell other people that women can't control their body."

In April 2019, Biden declares his intention to run for the Democratic presidential nomination for the 2020 election, entering a crowded field of Democrats that includes some of the most progressive candidates and platforms ever offered. It's not just that Medicare-for-All is the standard against which all other health care platforms are measured, or that action on climate change functions as a kind of litmus test. Basic questions on reproductive rights are used to sort candidates into categories too — and every single candidate was in favor of repealing the Hyde Amendment except for Biden.

When asked by a volunteer with the American Civil Liberties Union if he will commit to abolishing the Hyde Amendment, the candidate says that restrictions on federal funding for abortion "can't stay."

The former vice president again reverses his position on Hyde, while campaign co-chairman Rep. Cedric Richmond (La.) defends his "consistent" stance. A campaign statement read, "He has not at this point changed his position on the Hyde Amendment."

"I can't justify leaving women without access to the care they need and their ability to exercise their constitutionally protected right. If I believe health care is a right, as I do, I can no longer support an amendment that makes that right dependent on someone's income."

A Wisconsin activist and organizer pushes Biden on his Hyde reversal. A tweet of the moment, showing the former vice president on the defensive, goes viral.

At an audience-less two-man Democratic debate, Biden pledges to codify Roe into federal law, with one catch: “as modified by Casey." Casey says that states can institute laws restricting abortions, like so-called "heartbeat bills," or targeted restrictions on abortion providers, which often have the effect of closing clinics altogether.

"This is no time to pick and choose on abortion policy. With states in a race to the bottom to ban abortion and a Supreme Court hanging in the balance, we need presidential candidates who are unwavering in their support for our dignity and bodily autonomy," Morgan Hopkins, a spokesperson for the All* Above All Action Fund, an organization committed to abolishing the Hyde Amendment, told Mic in an email.

Biden's camp pledges that he's up to the task. "Biden will repeal the Hyde Amendment and use executive action to on his first day in office withdraw the Mexico City 'global gag rule' and Donald Trump’s Title X restrictions. And, he will build on the Obama-Biden administration work to fund and protect Planned Parenthood from baseless attacks," Biel wrote in an email to Mic. The Mexico City policy blocks federal funding for non-governmental organizations who support or inform about abortion in any way, from offering referrals or counseling to actually providing the service. Title X restrictions function the same way in the United States, forcing health care clinics serving low-income people to close if they mention abortion.

Biel additionally expanded on the steps Biden plans to take if he wins the nomination, "As president, he will protect the progress we’ve made, codify Roe vs. Wade, and guarantee that access to quality affordable care — including reproductive health care — is a right, not a privilege for everyone no matter their race or zip code."

The statement is light on specifics, leaving room for doubt to once again creep into voters' minds about what specific action the former vice president might take to protect reproductive rights. Biden has sought to make clear that he believes women should have control over their bodies. But whether supporters take his words at face value, after tracing his history on the issue, is another matter entirely.

Editor's note: This article has been updated to provide additional context about Biden's work to pass the Affordable Care Act in 2010.

This article was originally published on March 18, 2020