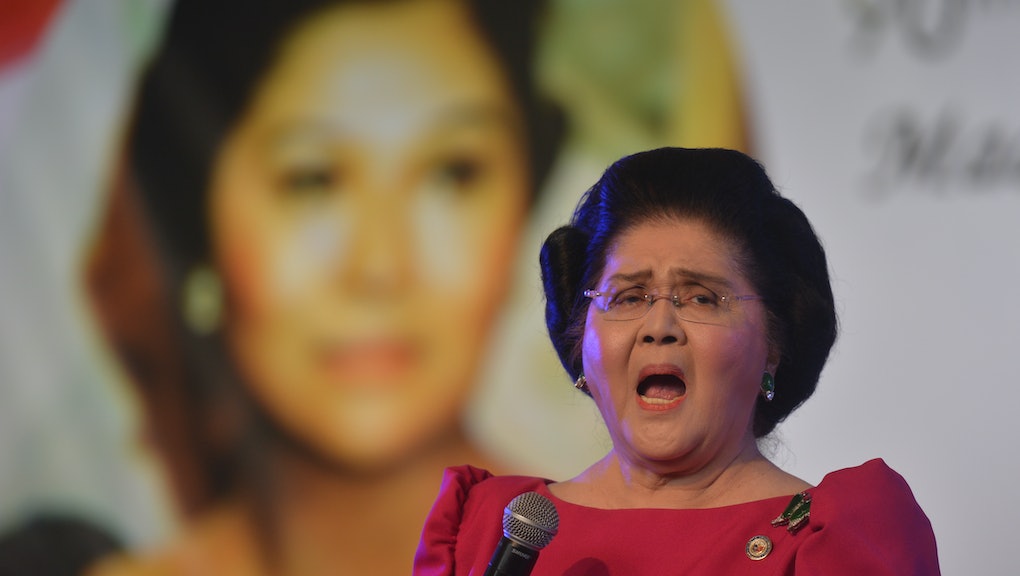 What Imelda Marcos can teach us about the fake news generation

“Perception is reality, and the truth is not.”

Imelda Marcos, the subject of documentarian Lauren Greenfield’s new movie, The Kingmaker, is many things: erstwhile first lady and congresswoman of the Philippines, current Guinness World Record holder for “Greatest Robbery of a Government,” a likely murderer, and an indisputable fraudster. She spins falsehoods as easily as she breathes, and her supporters enthusiastically buy into her gilded lies. The only honest comment Marcos makes throughout Greenfield's film, which opens in limited release Friday, is quoted above. It comes not as a relief but as a sobering, frustrating jolt. It’s 2019. Facts have no place here.

Marcos’s observation isn’t original, or new. It is, however, blunt and undisguised. She’s quite possibly unaware of how damning this statement is, or how prescient: Greenfield opens The Kingmaker in 2014, two years before Rodrigo Duterte engaged in his mass-murder campaign as president of the Philippines and before Donald Trump clomped into the Oval Office, three years before Kellyanne Conway introduced the concept of “alternative facts” and Trump proposed handing out a “Fake News Trophy” to an American media with the audacity to report on the cavalcade of lies that have defined his presidency. It’s infuriating that Marcos’s truth is that truth is irrelevant, but it’s twice as enervating that she’s correct.

The Kingmaker demonstrates Marcos’s philosophy in action from start to finish. Her family, beginning with her husband, Ferdinand, and continuing with her children, Imee and Bongbong (the former a senator, the latter a failed vice presidential candidate), embrace her belief that truth is malleable. Money bends truth. Money begets power, too, and power can of course cleave the truth right in half. With a fortune ranging in the billions, acquired via theft of public funds filtered through shell corporations, the Marcos family enjoys near-limitless freedom to shape truth as they like. Ask Bongbong to his face if he and his parents stole from the Filipino people, and he’ll tell you, without even blinking, that of course he didn’t — he would never.

Guess what? He, and the whole Marcos clan, did. There are records. There are receipts. Consider how suspicious it is that Ferdinand Marcos’s salary, roughly $13,500 a year every year he held office, isn’t enough to live on — let alone for Imelda to amass a shoe collection clocking in at 3,000 pairs, transport a menagerie of African wildlife to the Philippines, and acquire Pablo Picasso paintings. The lie isn’t even a good one, and yet it stands. One of the greatest bloodlines of thieves the world has ever produced remains in politics, and in power. And short of mass food poisoning at Imelda’s birthday last July, none of them has paid appropriately for their crimes.

There’s a clear answer as to why: They’re wealthy beyond human comprehension. But upon closer inspection, at the heart of the matter rests another, more troubling answer: The truth of their sins holds no meaning today. Denial backed by bottomless resources is enough to deflect the truth; it’s money to pay for lawyers and enough red tape to stymie any investigation, plus the power to influence the makeup of the Filipino Supreme Court to tilt the scales in favor of Duterte, a longtime friend of the Marcos family, just in case.

This kind of cronyism mirrors that of the Trump presidency: Trump’s team of advisers is stacked with sycophants, though he has a well-documented tendency to shirk loyalty himself. His Cabinet is a revolving door of suck-ups and brown-nosers, each motivated by a desire for cultural and financial capital — neither of which forge especially strong bonds of fellowship.

Instead, the glue that holds together an alliance that deals in lies is the act of lying. When people can make brazen fibs in plain view and get away with them, exposing the untruths becomes a Herculean task. Boris Johnson, the latest embattled prime minister of the United Kingdom, told “so many lies” while campaigning in favor of Brexit in 2016, and yet he continues lying to this very day. Meanwhile, Trump, facing a continuing impeachment inquiry against him, determinedly spouts off fabrications about the whistleblower claims that precipitated the investigation. Even when the facts of the whistleblower’s report are corroborated, it’s only a matter of time before Trump shoots them down anyway, through sheer force of will. There was a quid pro quo; the date given by the whistleblower is accurate; aid was withheld from Ukraine. But a single tweet wipes the truth away.

Greenfield connects the zig-zag dots from Imelda Marcos to Trump not because she wants to, but because she has no choice. Photographs of Trump and Marcos together at glitzy state dinners create a throughline from her to him — she, the progenitor of the fake news and alternative facts strategy, he the strategy’s most ardent practitioner. Making The Kingmaker without reference to the leader of the free world would be impossible; it’d be irresponsible, too.

Fake news is everywhere. To an extent, this realization is encouraging; it’s good to know that in the United States, we’re not alone living under the thumb of an inveterate con artist. The lies continue, but on the other hand, so too do efforts to unveil them. But The Kingmaker leaves viewers with the most terrifying truth of all: No nation on the planet has deployed alternative facts while leveraging incestuous webs of political power as successfully as the Philippines. Duterte strives to pave the way for Bongbong to ascend to the presidency; Imelda has been sentenced for her crimes, but she’ll probably never see the inside of a prison cell thanks to the power of her legal team, funded by the very same funds she and Ferdinand plundered from the Filipino people for decades.

Trump, Johnson, and others like them are nowhere near as gifted at the grift as Marcos; she’s been grifting longer than either of them, after all. But chillingly, they still have plenty of time to catch up.

More like this
Trump kept a Gitmo prisoner detained for 5 extra years. Biden has finally freed him
By Rafi Schwartz
The first insurrection felony sentence is here, and nobody's happy about it
By Rafi Schwartz
The protests in Cuba are about much more than the current economic crisis
By Vanessa Taylor
Stay up to date