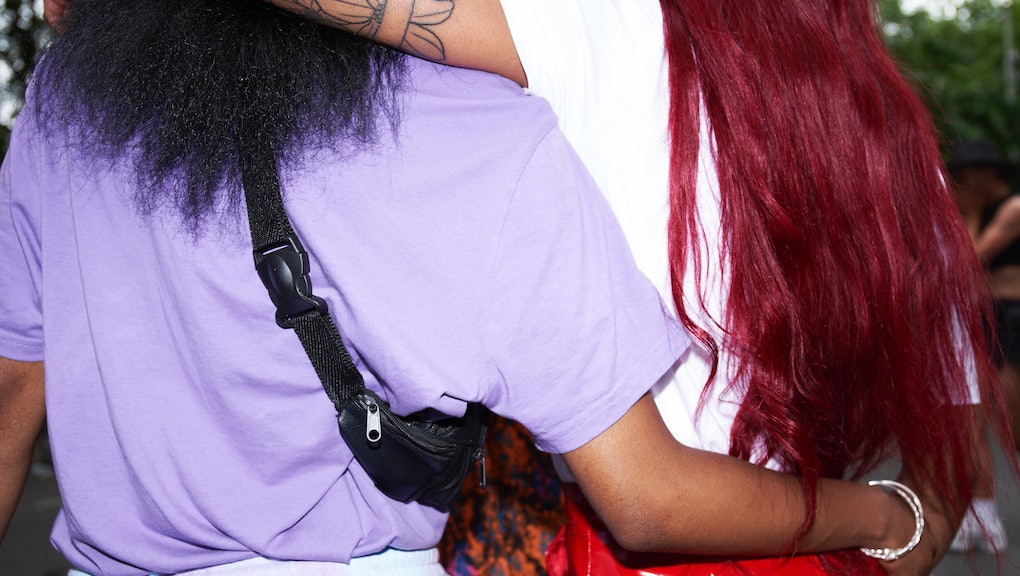 What is intersectionality and why is it important?

The term intersectionality gets thrown around a lot by progressives and conservatives alike. I’ve seen conservatives use intersectionality to describe what they see as some kind of mythical new caste system in which people with the most marginalized identities get to have more privileges than everyone else (um, okay). One look at the news and you can tell pretty quickly that the only special treatments marginalized folks seem to be getting are hate crimes and over policing. But people on the left also often misuse — or misunderstand — intersectionality. Like so many concepts that go viral, it is an idea that has been watered down, misappropriated, and co-opted. So, let’s talk about what intersectionality actually means and how we can both practice it (if necessary) and honor it in others (always necessary).

The origins of the term

To get us all on the same page, here's a short history lesson. Don’t worry, unlike most history lessons, the so-called protagonist will not be a white man who comes to save everyone with his giant ... cape.

First of all, the term “intersectionality” was coined in 1989 by Kimberlé Crenshaw, a Black feminist academic who has taught at both Columbia Law School and UCLA. According to Crenshaw’s 2016 TED Talk, she was trying to find a metaphor to help people understand the ways that race, gender, class, and other identity markers overlap or intersect with each other. An “intersection,” as Crenshaw described it, is where an individual is located according to the identities they hold, and the traffic that moves through each intersection is discrimination, which can be flowing in many directions at once.

To be clear, Crenshaw was using the concept of intersectionality to describe the matrix of discrimination that Black women face within the legal system. This term, originally meant to be a legal concept, was then taken up by feminists and other kinds of activists. What does Crenshaw think about her idea being adopted by the masses?

Well, Crenshaw told Vox in a 2019 interview that, “usually with ideas that people take seriously, they actually try to master them, or at least try to read the sources that they are citing.” That seems like a really diplomatic way of encouraging folks to do the work of educating themselves about intersectionality before we go throwing the word around.

To be fair, while Crenshaw definitely coined the term intersectionality, she was using it to describe something that was already happening in the world, namely the unique complexity of the discrimination that Black woman face. What we might now call intersectional feminism has been talked about by Black feminist intellectuals at least since the 1900s. Anna Julia Cooper wrote a collection of essays in 1892 called A Voice from the South in which she challenged white feminists and Black men to lift up the voices of Black women. And the Combahee River Collective, a group of Black queer feminists, released a statement in 1977 that proposed that societal problems must be addressed within a framework that understands what they described as “interlocking systems of oppression.”

Are you noticing a theme here? Intersectionality is a term coined by a Black woman to describe the discrimination experienced by Black women, and all the people who have been prominent in developing the idea of intersectionality — whether or not they called it that — have also been Black women.

Who gets to use it

Does that mean that you can’t practice intersectionality, or even use the word, if you aren’t a Black woman? No. But we do need to be aware of the roots of a term if we are culturally borrowing it and be socially responsible when we do use it.

“While this term has been used across many marginalized groups, it should continue to be grounded in the experiences of those who are most on the margins — Black and queer and trans women,” says Jess Jackson, a diversity educator in Detroit who describes herself as a biracial-Black, fat, queer Woman. When we take a word that describes something outside of our cultural experience without understanding and honoring its root and origins, that’s not borrowing; it’s a form of appropriation.

For those with intersecting identities, it can be crucial to recognize both equally. “For me this is necessary for my survival,” Jackson explains. “Many of the identities I hold fall at the margins. I find that no matter what space I am in, I am in a role of educating to ensure that the needs and barriers that affect me and my communities are addressed.” What Jackson is doing here is a way of honoring her own intersectional identities.

Jackson defines intersectionality as the constant practice of expanding perspectives and needs and rejecting the status quo. Being intersectional requires us to understand the identities we hold and the privileges that come with them, and also to be able to recognize both which identities are being centered in a given context and which are being left out.

For example, Jackson says, as Bi-racial Black person who works to educate folks about diversity, she has to be aware of the way her identities play into power dynamics and then work to dismantle them. “I have privilege in as a light skinned Bi-racial Black woman with closer proximity to whiteness. This proximity presents a bias,” says Jackson.

“It is easier for me to establish rapport and trust with white folks because I am used to navigating very close and intimate relationships with them. The way I show up intersectional in this work is by inviting my more melanated sibs to take up space and clarifying that my experience is not reflective of all Black people.” Jackson says that, for her, intersectionality looks like naming her privileges and ensuring that more opportunity is extended to folks with different levels.

“I know that a person understands intersectionality when they’re thinking about identity across multiple perspectives,” Jackson says. When you go into an environment — whether it’s a Zoom room or a IRL coffeeshop — Jackson recommends asking yourself a few questions. “Whose perspective is missing here? How might this decision affect folks with different identity groups than myself? What perspectives are centered or dominant here, and how can I re-center on the experiences and perspectives of those with more marginal experience?”

How to honor intersectionality in yourself or others

This kind of inquiry is crucial for people who are members of marginalized communities to do because it allows us to consider which parts of us may be invisible or unwelcome in a situation and therefore prepare ourselves. Perhaps more importantly, asking ourselves these intersectional questions can also help us reckon with the kinds of power we do hold and understand who we need to lift up. Understanding your intersectional identity location is, as Jackson says, a matter of survival because it allows us to be aware of the discriminatory traffic that may be headed right for us, and it also gives us a firm place from which to resist against the dominant paradigm.

For folks who don’t have any identities that are considered marginalized — a.k.a. cis-het white men — it’s even more important for you to understand how much power you inherently wield. If you want to be an ally, we need you to use your white male privilege to de-center yourself, amplify the voices of others, and share your wealth and resources. And if you hold intersectional identities that may be different from others present, you still need to respect the validity of other folks’ experiences. For example, as a white person, I don’t get a free pass on doing the work just because I’m also queer.

It's important to be intentional about using the term “intersectionality.” It's not a dating app flex, and it is not a way of highlighting one kind of marginalization in a way that is secretly hierarchical. Every time you want to say “intersectional,” hold it in your mouth for just a moment, try to taste the many generations of labor that have gone into crafting this concept, and maybe ask yourself if you are truly grounding your words in an awareness of the true richness of the term.