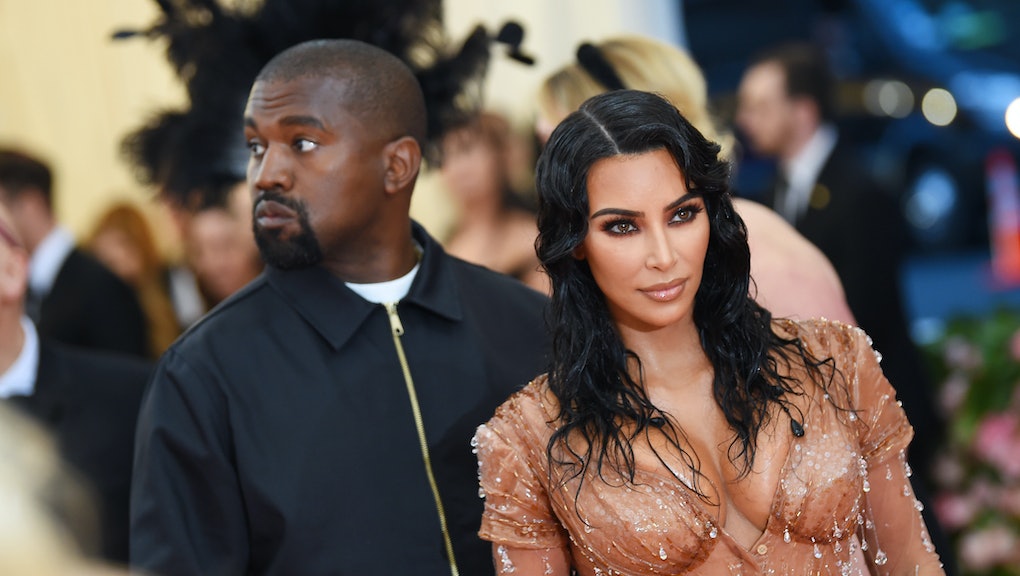 What regular couples can learn from Kim and Kanye's reported split, according to therapists

We don’t know exactly why Kim Kardashian and Kanye West are getting divorced. (It’s definitely not because Ye cheated with Jeffree Star, as was recently rumored on the internet.) What we do know is that Kardashian has retained the services of celebrity divorce attorney Laura Wasser, who inspired Laura Dern’s cutthroat character in Marriage Story. So, yeah: “They are keeping it low-key but they are done,” is how a source put it to Page Six.

Most likely, a combination of factors contributed to Kimye’s demise, like divergent politics, public scrutiny, and untreated mental illness. And while the Kardashian-West clan often acts like they’re from some alien planet (I mean, who considers a She Hulk-esque breastplate appropriate holiday attire?), it actually seems like the couple’s marriage strife has more in common with everyday relationship challenges than one might think.

In that spirit, we tapped a few therapists with expertise in couples counseling to talk us through how Kim and Kanye might work through their problems, should they try to reconcile. It’s important to note, of course, that the experts we talked with can’t diagnose the couple’s problems without seeing them as patients. We’re merely using Kimye as an example to talk about these subjects more broadly.

Anyhow, based on the evidence proffered by various tabloids, the Kardashian-Wests “haven't spent time together as a married couple in months," an exclusive source told E! News. It seems like their relationship seriously suffered over the summer, when West made a disruptive bid for the presidency. Around the same time, the rapper posted a series of sensitive tweets about Kim and their family, and the incident prompted the reality TV star to speak out about her husband’s diagnosis of bipolar disorder for the first time — asking the public for compassion and privacy.

The thorniest issue that becomes apparent from these anecdotes is that supporting a partner who’s been diagnosed with mental illness can be challenging. The situation gets far more complicated when someone refuses to seek treatment or take medication, as West has done, Dr. Eris Huemer, an LA-based marriage and family therapist tells Mic.

“Getting somebody with bipolar disorder to be medicated [is challenging], especially when they really enjoy the highs,” Huemer says. Not to mention, “it's a very difficult mental illness to medicate properly, even though [Kanye] has the best-of-the-best people. But if someone’s not wanting to be medicated, it's going to create such a strain.”

“The best thing you can do for a partner that has a mental health diagnosis is to become very intimately familiar with, not only what their diagnosis is, but how it manifests for them,” adds Dr. Racine Henry, marriage and family therapist. However, unconditional support can become toxic “when the person who has a diagnosis isn't helping themselves. You can't want healthiness for somebody else if they don't want it for themselves,” Henry says.

Throughout their six-year marriage, Kimye presented a strikingly united public image. “[Kim] likes to put the image out there that she adores him, worships him, loves him, she’s all of the things for him. And he’s done the same for her,” Huemer notes. “They mastered the art of giving each other the ego boost they needed, but like, how can that last?” Especially when the couple’s politics, values, and aspirations seemed to be seriously diverging. “She is serious about taking the bar exam and becoming a lawyer, she is serious about her prison reform campaign. Meanwhile Kanye is talking about running for president and saying other crazy sh-t, and she’s just had enough of it,” a source told Page Six.

“We have a very new reality in terms of political differences between couples right now, and that’s really been at the forefront since 2016,” Huemer says. “It's very tough right now. We're seeing families and marriages falling apart, because we're recognizing that our core beliefs are different.”

“I think it all comes down to how significant those differences are,” Henry adds, noting that Kim and Kanye's political differences are pretty antithetical to each other. "So it'd be really difficult to remain in a romantic relationship with someone who's promoting the opposite of your political views and was actively engaged in political ventures that could grossly impact the very people you're trying to protect or advocate for.”

Still, Huemer says if couples are committed to working through their ideological differences, they ought “to be curious, instead of confrontative about the issues at hand.” She advised compassionately exploring the origins of your partner’s beliefs and using “I statements” to talk about your disagreements. Then, reflect on your shared values as a couple. “What do I love about them? Why are we together?” Huemer says.

Still, from what the experts had to say, it seems like not even getting that jacuzzi could keep Kimye together. “Having a lot of money and fame doesn't necessarily mean that your problems go away. This is one of the reasons why a lot of times celebrity marriages fail, because they’re actually amplified in the spotlight,” Huemer notes. “Just because you're a celebrity doesn't mean you're superhuman." (Somebody tell that to Kim’s bright green Christmas 6-pack.)