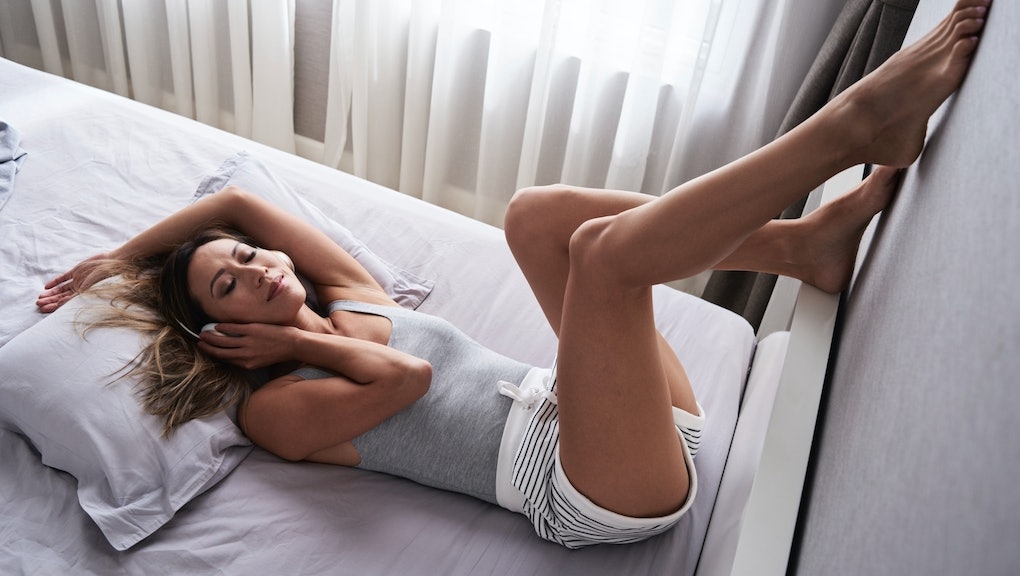 While the content of it may vary, we all have a Spotify Playlist we turn on when we’re turned on. Playing certain music when you’re about to have sex with somebody special (or not special) is a necessary joy. And while a poll of 50 people may surely result in 50 different songs that serve as libido-ticklers, they all do the same thing: Put us in the mood for a bit of romance. And let’s be honest, some songs just make us horny (shout out to the track that always does it for me). But why exactly does certain music have this effect on us?

While we don’t have the complete picture of what makes certain songs feel like aphrodisiacs, it turns out that there is some brain science in action when you choose a track to thrust to. In fact, there’s a whole field of study it falls under: systematic musicology, or the academic discipline defined by deep investigation of music via research and scholarly analysis. Rather than just saying Josef Salvat’s voice is super sexy and calling it a day like I do anytime someone posts the question, music researchers look at various aspects of human behavior as it relates to song, resulting in some pretty fascinating connections between music and action.

Many of these studies offer glimpses into how music directly affects our behavior. A 2017 study in The Journal of Retailing examined the correlation between crowded retail shops, loud music, and how much a customer spends. The research found that loud, fast music makes customers spend more, even when in an unpleasantly crowded shop. So the next time (after the pandemic is over) you’re in a crowded H&M, you're hearing an uptempo Rihanna song blasting through the airwaves because it’s going to make you spend more. And to my point about music prompting our bodies to do things, you can imagine what else Rihanna’s voice can make you take out.

In a TED talk by music researcher Hauke Egermann, he posits that there are a few distinct processes happening in our brain, helping us interpret music in specific ways — both sexual and not. Amongst the most clear is learned association. This means that through a lifetime of listening to popular music and other musicians who sing about love and sex, we have built a music vocabulary in our brains that give us obvious cues.

When Britney Spears opens “Oops, I Did It Again,” with her distinctive “Ooh,” we all knew what mood she was trying to evoke because her debut single “Baby One More Time” uses the same exact trill, right in the beginning. And just like the first five seconds of those songs can put us in a very “It’s Britney, Bitch” place, you might hear a sultry piano melody or crooning that indicates that it’s sexy time.

Another part of Egermann’s findings is the idea of “expressive emotional movement.” This means that we connect sounds with emotions. While this includes notes and tones, it also includes random noises that we associate with emotion, like the upbeat tapping of a foot and whistling with happiness, for instance. This also includes the way people say things as well. A person saying “good morning” in a chipper tone read happy to ask because that person is in fact happy, and therefore we associate that with notes in music that sound similar. For instance, just think of the song “Happy” by Pharrell, and that there’s no hint of melancholy anywhere. Even if he was singing in Simlish, you would understand that the song is meant to invoke a good mood.

However, experts don’t agree on whether this theory is accurate. The words ‘happy’ and ‘sad,’ could be imprecise in this context — more accurate might be, positive and negative, says Christopher Doll, associate professor in the department of music at the Mason Gross School of the Arts at Rutgers University. “This shift reveals that we can only reliably generalize about shared experiences across multiple people if we have a basic binary distinction between two emotional responses.” So what we perceived as upbeat might not necessary be that to someone who’s had different life experiences.

While Doll points out that emotion is also largely subjective – a very good thing to note, he does add a specific clear context to what makes sound and sex so correlated when you’re not recording noise directly from the act of two (or more) people getting down and dirty in the sheets.

“There are many emotional responses a listener can have from hearing someone’s voice. Whether it’s singing or talking, a voice is capable of really pulling in the listener. With a rich and full voice, like Barry White, you are undoubtedly going to be pulled into a romantic feeling,“ says Justin Berger, an audio engineer for an erotica app called Kampsite. His daily routine involves editing stories spoken by real queer and curious men for the app, so he’s uniquely suited to speak on the connection between sound, sexuality, and what makes Josef Salvat make me want to take off my pants as soon as he starts singing, for some reason.

Another obvious part of this is the lyrics in a song. Obviously Marvin Gaye singing “let’s get it on” is going to make you think of sex right away. But why then, do songs like Charlotte Gainsbourg’s “Le Chat du Café des Artistes” sound similar in sexual forwardness? “One possibility is the sense of proximity resulting from singing close to the microphone,” Dolls says, which could trigger a delighted response. He adds that deep singing voices (for men) are heavily associated with sex because it might be a sign of male virility. Doll also takes special care to point out that Marvin Gaye’s high tenor is an exception to that rule.

“Whispering, panting, moaning, screaming — these singing techniques might remind us of actual sex,” Doll further notes. "’What'd I Say’ by Ray Charles is a classic example; Ray and the Raylettes moan back and forth at each other in orgiastic fashion. It's hard to hear this as anything other than a depiction of sex,” he says. Be right back, adding that to my playlist.

Your personal preference always has a little something to do with what makes a song sexy to you as well. When you hear a song you like, your brain rewards you with a dopamine, the happy hormone. Songs that release dopamine more intensely may feel sexier and more romantic to you. “Sex and romance also activate the brain's reward center and release dopamine,” says Aimee Daramus, a Chicago-based psychotherapist. “In women in particular, complex music that has the strongest effect on the brain's reward and emotional centers can affect how attractive they think someone is.”

Daramus points to a group of studies from a 2017 NIH analysis that looked at the correlation between music and behavior. This means that if John Legend singing “All of Me” was coming out of Zach Galifianakis‘s face, you might find the song just as hot. “So, on an individual level, the story told by the lyrics might be able to prime the feelings, but it’s probably also social and cultural transmission,” she says. There’s learned association again. Sometimes, the correlation between science and music plays in perfect harmony.

Our cultural values around sex and romance, our own previous experiences, and the influence of society as a whole on our brains and bodies are all influencing what we puts us in the mood. While there are similarities between all of us, like every individual, music preference's effect on us is also slightly different. Still, I’d like to meet one living human who doesn’t have D’Angelo on their Let’s Get it On Spotify playlist.

This article was originally published on November 26, 2020