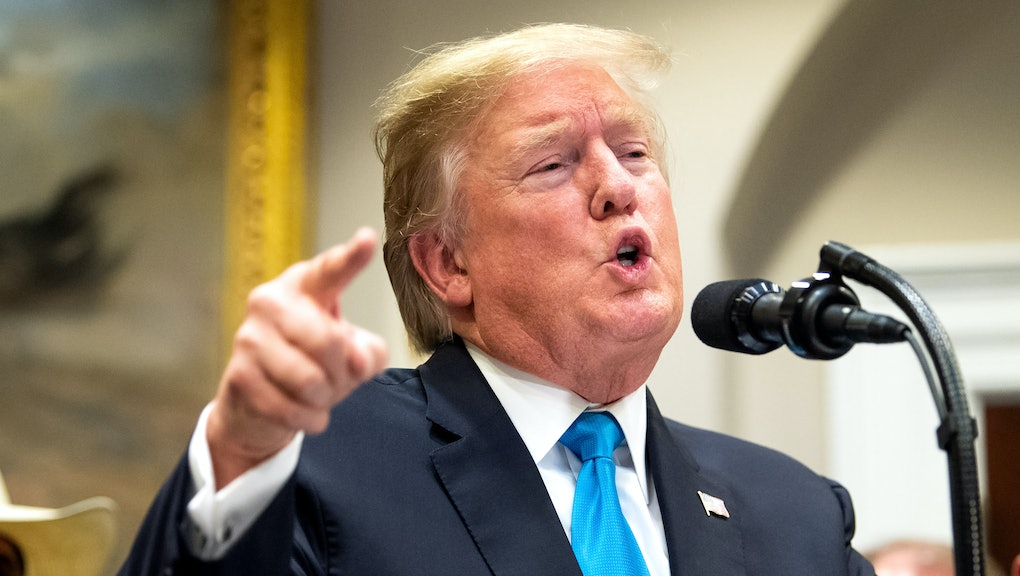 Why is Trump criticizing the way other politicians talk?

On Thursday night, the President of the United States posted a video of Speaker of the House Nancy Pelosi. He wrote "PELOSI STAMMERS THROUGH NEWS CONFERENCE,” above an edited video of Pelosi, who appears to take several pauses before she speaks. The video was from a press conference earlier in the day, during which Pelosi said that she wished "that his family, or his administration, or his staff would have an intervention for the good of the country."

Trump's tweet closely follows the circulation of another edited video of Pelosi speaking. The video was altered to make it appear that Pelosi was slurring her words and moving sluggishly. Former Mayor and Trump legal counsel Rudy Giuliani shared the video briefly to his Twitter account on Thursday night before deleting it. He addressed the situation with the following tweet:

Pelosi and Trump have begun a very public battle, each questioning the other's fitness for office. The Washington Post reported that on Thursday, Trump referred to Pelosi as "Crazy Nancy," before trying to walk the statement back.

“Crazy Nancy. I don’t want to say that, because then you’ll say it’s a copy of ‘Crazy Bernie,’ ” Trump said. He also said that he has not been temperamental during tense meetings with Pelosi. “I’m an extremely stable genius. Okay?”

But for Trump, sharing edited videos of Pelosi's faltering speech may not be an effective strategy since many will pale in comparison to content he has shared of himself, including praise from Fox News anchors, photos of crowds attending his rallies, and racist propaganda about asylum seekers.

Just in April, after the Mueller report was published, the shared an edited clip of himself yelling the words "no collusion" ten times in a row.

In addition to his Twitter posts, his public addresses have often included odd phrasing and what appears to be fragments of thoughts. In February, when the president declared a national emergency at the border, his speech was described as "rambling" by the Atlantic, and included the following statement while advocating for a border wall: "The only weakness is they go to the wall and go around the wall. They go around the wall and in, okay, that’s what it is. It’s very simple."

After posting the Nancy Pelosi video edit, Trump also posted about his long running theory that Twitter is trying to censor "conservative voices" on its platform, and CNN's television ratings.

More like this
Trump wanted to quarantine Americans at Gitmo last spring, according to a new book
By Rafi Schwartz
57% of Republican voters believe Trump only lost because of fraud, per a new poll
By Rafi Schwartz
Here's a chilling peek into just how close Trump got to running a police state
By Rafi Schwartz
Stay up to date