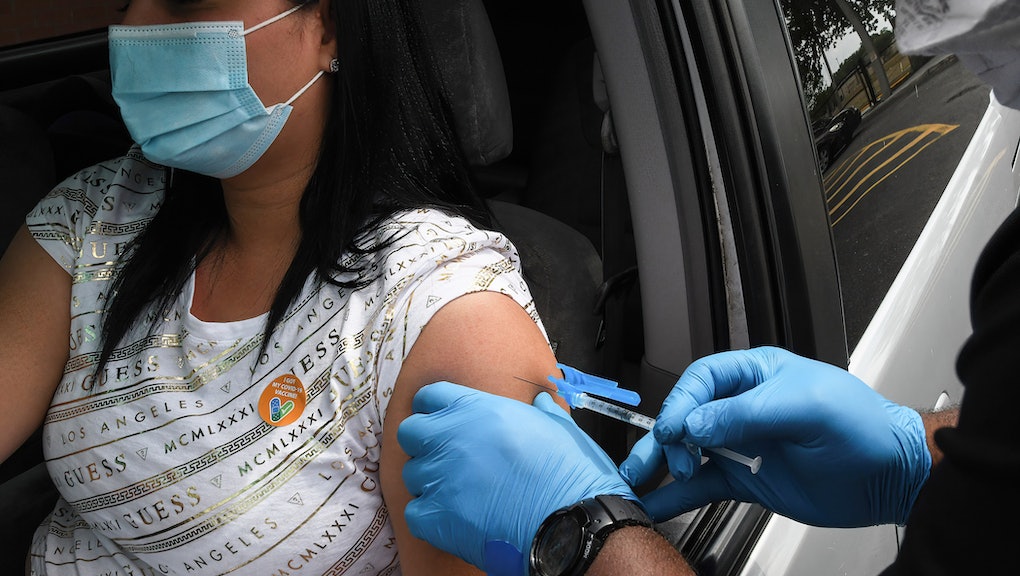 The latest vaccine drama here in the U.S. seems to involve figuring out the exact risk of side effects. Three states — Georgia, Colorado, and Michigan — recently shut down Johnson & Johnson vaccine sites after some people had adverse reactions. But all the vaccines have known side effects and most of them aren’t a big deal, which begs the question: Are these states overreacting by temporarily putting said vaccines on the shelf? Here’s what we know so far.

Last week, 18 people in North Carolina reported side effects such as nausea, dizziness, and fainting after receiving the Johnson & Johnson vaccine, reported CBS. Eleven people in Colorado reported similar reactions, and over the weekend, 8 people in Georgia reported similar experiences. Health officials in those states say that they’re pausing to investigate what’s going on.

"There is no reason to believe there is anything wrong with the vaccine itself, and other individuals who have received the J&J vaccine should not be concerned," Kathleen Toomey from Georgia’s Department of Public Health, told Fox 5 Atlanta. "We are looking into what happened and what may have caused the reactions." Toomey also said that conditions at the vaccination sites — such as temperature — may have played a role in the side effects people experienced.

The thing is that the side effects in question don’t appear severe or even that rare. To put the situation in context, of the 1,700 people vaccinated last Wednesday in Commerce City, Colorado, 11 had side effects, Insider reported. That’s less than 1%. In clinical trials, 55% of people who got the Johnson & Johnson vaccine had similar side effects within 2 days of getting the vaccine, but those side effects continued for a week or were severe in only about 3% of those people. Basically, 1% a really low side effect rate, and states aren’t actually waiting long enough to see whether those side effects are ongoing before they shut down.

It’s also worth noting that the CDC has already completed an investigation following the cases in Wake County, North Carolina and given the state the green light to continue using the vaccine, according to the Associated Press. Vaccine sites in Wake County, NC are slated to start using the Johnson & Johnson vaccine again as of today.

To be clear, none of these states stopped using the J&J vaccine at all locations statewide, just in the places where individuals reported adverse reactions. And, for their part, state health officials do seem ready to resume using the vaxx once it’s been cleared by CDC investigations. But it just seems so mysterious that they shut down any vaccine sites at all, given that COVID-19 cases and hospitalizations are on the rise amongst the unvaccinated and that the side effects that caused the shut downs were actually less common and less severe than expected.

Unfortunately, neither public officials nor science can explain these shutdowns, so which makes the whole situation seem sort of mass hysterical. Look, I understand. We’re all really nervous about going back into the world, but these unnecessary delays could cost time and lives, so if everyone could just take a Xanax and get vaccinated, that would be great.

Update 4/13/21: The U.S. has temporarily stopped the administration of Johnson & Johnson vaccine because of six new reports of a rare disorder involving blood clots. Both the FDA and the CDC have paused using the vaccine at federal sites while they examine current cases and safety issues, and have urged states to follow suit.