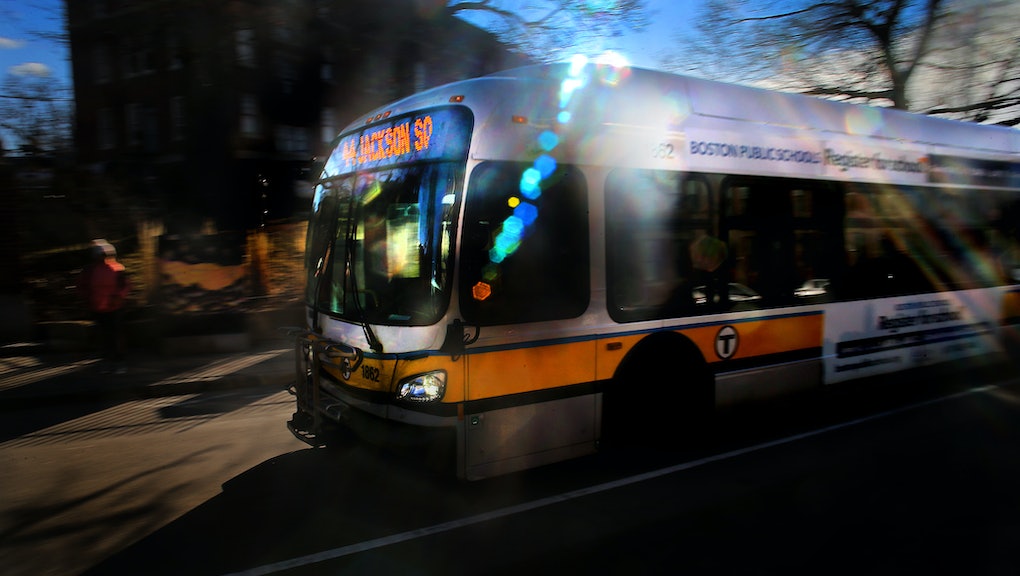 Will public transit survive the pandemic?

It’s been over a year since COVID-19 forced a national shutdown. Until very recently, most of us hadn’t gone to a bar, seen a movie in theaters, attended a concert, or watched live sports since March 2020; worse, we’ve all had to forsake quotidian pleasures we used to take for granted, like a morning coffee run or a casual browse through the supermarket produce aisle. And that’s to say nothing of the most painful sacrifice of all: ceased contact with loved ones, either because of distancing or death.

One formerly everyday aspect of American life is public transit. Yes, most American cities supported by public transportation systems put up with constant kvetching about it, because few people are ever fully satisfied with their experience riding the buses and trains. Still, even a bummer experience on the subway sounds like a dream for many people compared to sitting inert at home. We’re so far removed from use of these wonderful systems that culturally, we may feel degrees of nostalgia for them — for the bustle and noise, the inevitable delays, the overcrowded spaces, the unwanted and too-intimate acquaintance with the elbows of the guy standing next to you.

The good news is that vaccinations are increasing every day, and with every needle jabbed into an arm, Americans get one step closer to being able to enjoy the activities they used to grouse about. The bad news is that public transportation is in a tenuous place after a long year spent with plummeted ridership and lack of use. Even as coronavirus gradually recedes, questions remain: How can we return to public transit safely in the shadow of the pandemic? And most importantly, can these systems handle a return to regular use?

There’s no getting around the complications of ridership reduction. “It's a serious issue that ridership is down so much, and there's just not many people using the system,” says Matt Warfield, a new mobility planner for the Policy and Planning Division of Boston’s Transportation Department. Too few riders means there’s not enough fare money to keep things running, as many municipal transit systems still rely on the fare box to get by.

Of course, ridership is partly a matter of who gets to stay home; telecommuting is a terrific benefit and an easy way to circumvent viral spread, but not everyone can do that. Visits to the market are inevitable, as are medical checkups and pharmacy runs, and that means that people like custodians, doctors, and grocery workers have been heading to work in person this whole time. According to Matt Moran, the Policy and Planning Division’s transit team director, some of Boston’s bus routes still have “over 50% of pre-COVID ridership,” especially in communities like Mattapan, Dorchester, and Roxbury.

Fifty percent may sound like a good number, and it is; in areas like New York City and San Francisco, ridership numbers plummeted to single digit levels or just slightly above last spring, and though they’re on the rise, they still haven’t fully recovered. But it also highlights the tension at play between public transportation’s present and its future post-COVID. As more people return to work, road traffic will get worse, and as traffic gets worse, buses become less viable, except in the select places where priority or express bus lanes exist to separate the commuter system from private cars. A healthy transportation system relies on timeliness and predictability, as well as a balance between crowding and funding. Too few riders means not enough funding, but too many riders gums up the rails.

In an interview on Cheddar Closing Bell, MTA Chairman and CEO Patrick J. Foye noted that on NYC subways in March and April 2020, “pandemic-caused ridership was about 95% down, way worse than the Great Depression.” Down in Bayou Country, just after New Orleans instituted its stay-at-home order, “our ridership really plummeted,” New Orleans Regional Transit Authority Chief Security Officer Mike Smith tells Mic. Over in California, Jim Allison, the manager of media relations for Bay Area Rapid Transit, says that ridership reports from January 2021 “showed that we had about 12% of our pre-COVID ridership.” For those San Francisco-area commuters, even a year later ridership hasn’t recovered.

Given how long experts and authorities have stressed the importance of staying at home whenever possible, these numbers are perhaps unsurprising. But ridership could stay low indefinitely, without proper messaging to attract riders back to the public transportation systems they’ve been told to avoid. As Warfield points out, “if [riders] had trust in the system, they would begin using it again.”

But how to regain that trust is a complex problem. “I'm following the news. I'm following the science,” says Daniel M. Kimmel, an author and film critic located in Somerville, Massachusetts, a suburb of Boston. Kimmel is a lifelong public transit user; he’s never even had a driver’s license, let alone driven a car. “If Dr. [Anthony] Fauci says, ‘You know what, we’ve hit herd immunity, you don’t have to wear a mask if you don’t want to,’ that’ll be okay with me.”

Otherwise, Kimmel believes the T — Boston’s subway system — needs to focus on being more consumer-oriented. He recalls the first time he traveled downtown, after more than a year in isolation, and finding the train had plenty of room for people to stay distanced from each other. No one’s riding the T at the moment, so perhaps that was to be expected. But the question is how to prioritize keeping that open space, to give a sense of security, while maximizing ridership, which will keep the system healthy. Kimmel says that even though he’s vaccinated, if he’s riding the T and it gets to a point where “it’s standing room only, and people are crowded next to each other, and I’m hearing, ‘Oh yeah, 50% vaccinated and 50% not,’ I’m going to be concerned.”

To help ease such concerns, Moran suggests the Massachusetts Bay Transportation Authority should reach out to “members of the public” to assure them that while masks and social distancing remain vital, riding the T and the bus is “fundamentally safe.” In Boston specifically, the “multi-sector” business group A Better City released a comprehensive report about standard safety measures as well as the steps being taken by the MBTA to disinfect all buses and trains. Meanwhile, studies have shown that underground trains like the New York City subway are much safer than expected, given the regular cycling of air throughout the system. But the city has done little to debunk the idea that the subway is dangerous, instead spending hundreds of millions of dollars to shut the system down entirely for two hours a night to perform a deep surface clean, even though scientists have explained that surface transmission of coronavirus isn’t a significant cause for worry.

Without trust, getting people back on public transportation becomes a daunting task. And without people, the systems will stay underfunded, which will exacerbate the problems facing them even before the pandemic. Public transportation receives funds from sources other than fares — sales taxes, property taxes, and income taxes, for instance — but paying customers are still crucial.

In a city like New Orleans, whose economy relies on tourism, Smith says getting butts back in seats will require a partnership between the city itself as well as local businesses, — both those that depend on tourism for their livelihood and those that don’t. Coordinated messaging, including advertising about how NORTA is working to prevent COVID-19 infections, will be crucial to drawing locals back to the NORTA system and persuading out-of-towners that it’s safe enough for them to make the trip to The Big Easy.

Across the country, BART administrators are preparing for the recovery to ramp up. For now, “full service” has been reduced to 30 minutes between trains (the pre-pandemic average wait time was about 15 minutes) and fewer routes on weekends. Allison explains that BART was able to keep its workforce mostly intact throughout the pandemic, so it’s ready for a passenger surge. But Allison still isn’t expecting to see anything over “about 40% of our pre-COVID ridership until maybe July of 2022.”

That’s an enormous waiting period. It’s true that, in Warfield’s words, public transit is “designed to be subsidized” to an extent, but under current circumstances, subsidization has become even more important. What hopes most systems have for sustaining their operations through the final legs of the pandemic and beyond rests largely on receiving emergency funds from Congress. “I know the desire is to see some federal funding come, some supportive funding, so that public transit can hold out,” says Warfield in Boston. Out west, BART expected $1.7 billion in funding from the American Rescue Plan Act, signed by President Biden on March 11; the same bill accorded $98 million to Louisiana’s public transportation systems. Biden’s latest offering comes via his newly unveiled infrastructure plan, which the administration says is designed “to modernize existing transit and help agencies expand their systems to meet rider demand.” It would infuse $85 billion into these systems, which would be a big help — if it passes.

Until then, NORTA, the MBTA, the MTA, BART, and every other public transit organization in the U.S. needs to get riders back on board. “The folks that rely upon [public transit] as a true transportation option are getting hurt across the board,” Warfield says, and that disproportionately includes front-line workers and people in lower-income communities. How people move around their city dictates what they have access to and what opportunities are available to them.

As the country’s trains and buses sit inert or half-empty in the vaccination phase of COVID-19, one question must be answered: What are our values as a society in terms of American mobility? The pandemic has revealed the frailty of public transportation, as well as its necessity in the daily lives of many. It’s not enough for the government to pass one-time emergency relief. If we want these systems to survive, we have to invest in every part of them, long-term.

More like this
Vaccines are good. Threatening to evict someone over them is not
By Rafi Schwartz
100 years after the country's largest labor war, its dark legacy still looms
By Kim Kelly
I never want Tucker Carlson to stop talking about Nicki Minaj's cousin's friend's enormous balls
By Rafi Schwartz
Stay up to date