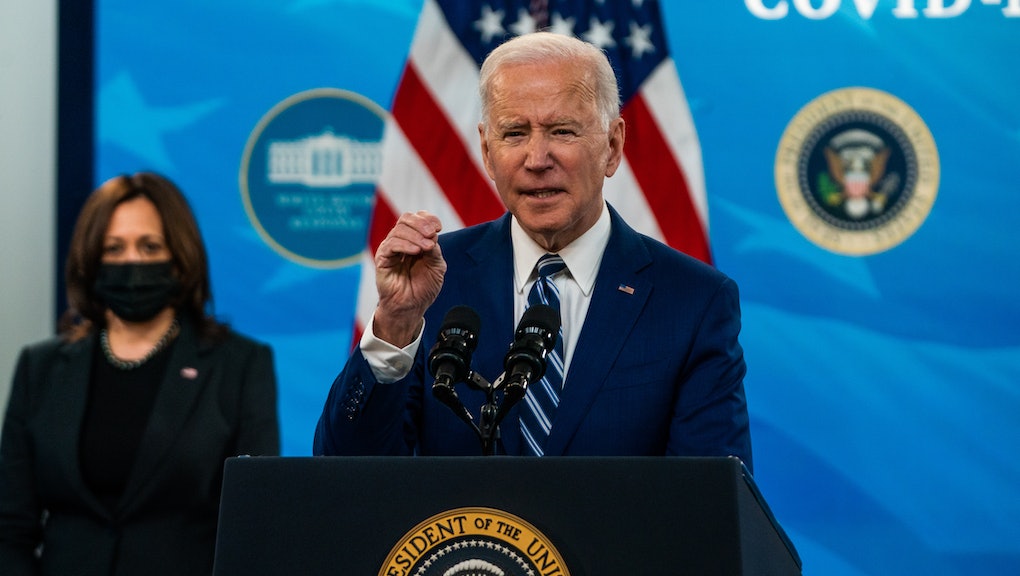 Welcome to Infrastructure Week, for real this time. On Wednesday, the Biden administration revealed the details of a $2 trillion plan to revitalize and improve America's infrastructure. The proposal, referred to as the American Jobs Plan, includes efforts to fix more than 20,000 miles of crumbling roads and bridges, build 2 million environmentally friendly and energy-efficient homes, and cover the entire country with electric vehicle charging stations and affordable broadband internet service.

President Biden's plan rolls in some of the ideas he first laid out on the campaign trail in 2020, including large chunks of his proposed $2 trillion dollar plan to invest in clean energy across the country. The price tag of these plans are the same — and climate change is central in the American Jobs Plan, with efforts to clean up the transportation and utilities sectors, two of the largest sources of carbon emissions in the country. But the American Jobs Plan is, at its core, aimed at improving infrastructure. Beyond the surface level of roads and bridges, Biden has also laid out a plan to eliminate all lead pipes and service lines that are part of water supply systems, increase funding for public transit and trains, and give a major boost to affordable housing.

Headlining the plan is traditional infrastructure: roads and bridges. The Biden administration has set a goal of modernizing 20,000 miles of highways and roads and repairing 10,000 bridges, utilizing a "fix it first" approach that echoes the Obama-era approach to infrastructure. "Fix it first" seeks to maintain and rehabilitate existing infrastructure rather than building new roads, which is much more expensive and has a much larger carbon footprint. In addition to improving roads across the country, the Biden administration will seek to encourage the use of electric vehicles by building a network of more than 500,000 electric vehicle chargers. The essential infrastructure for electric cars comes as some states are gearing up to ban gas-powered cars and the construction of new gas stations in the coming decades.

Mary Angelica Painter, a political scientist with a focus on transportation and technology, says that improving roads and bridges is "a solution to long-term problems of American roadways" that may be able to achieve bipartisan support. But while it might be the most agreeable of Biden's policy proposals, she warns that it doesn't do enough to shrink the massive carbon footprint created by transportation. "This does little to incentivize moving cars off the road, which would have the most significant impact in improving carbon emissions," she says, explaining that it's unlikely that Republicans in Congress will be moved by the expansion of electric charging stations. "There doesn't appear to be a clear path forward without finding some way for the Democrats to 'go it alone,'" she says. That puts the plan in a precarious position: not ambitious enough to result in a comprehensive overhaul of the transportation sector, yet still too radical in the eyes of Republicans to achieve significant bipartisan support.

Painter is right that the American Jobs Plan certainly emphasizes the streets. But there is a major investment in expanding alternative means of transportation included in Biden’s plan. The president calls for $85 billion to go toward an effort to electrify at least 20% of the country's fleet of yellow school buses — a plan that falls in line with Biden's executive order calling for the full federal fleet to be electrified. Another $80 billion would be invested in Amtrak and inter-city rail that could help improve access by expanding tracks and connecting new cities while modernizing these trains and addressing the long backlog of necessary repairs. For those who need to be in cars, Biden has set aside $174 billion that would provide sales rebates and tax incentives for consumers who purchase American-made electric cars.

Biden's approach to transportation is not quite as ambitious as some people — Painter included — would like to see. She called for additional "transportation equity and climate change mitigation," including increased efforts to "incentivize people to use zero-emission or low-emission forms of transit such as public transportation, cycling, or walking." While Biden's plan does do some of this work, Painter tells Mic that she would’ve included more of an effort to increase bus rapid transit systems, which typically offer direct routes, more frequent service, and bus-only lanes that improve efficiency on the roads. Likewise, Painter says she would like to see the expansion of bike lanes and improvements to sidewalks and crosswalks that would encourage more car-free navigation through communities. "This would save families and individuals money by alleviating car dependency, while also making our communities more livable," she says.

Overall though, the Biden administration has taken a more holistic view, recognizing that public health and education are pillars of the country's social and economic infrastructure. Biden intends to invest $45 billion in the elimination of all lead pipes in water systems. It is estimated that nearly 10 million Americans, including 500,000 children, still get their water from lead piping. Lead has been shown to have adverse effects on child development and can lead to behavioral problems; its effects were most infamously on display during the Flint water crisis in Michigan. Another $100 billion will be invested in public schools, while $25 billion will be invested in child care facilities — a potential preview of another ambitious spending bill planned for April that is expected to include significant subsidies for child care, along with health insurance expansion and free access to community colleges. Another $400 billion would go to providing in-home care for elderly Americans and people with disabilities — one of the largest individual investments within the plan. This spending would be particularly reserved for providing care for underserved communities, particularly women of color.

Andrew Flachs, an environmental anthropologist and assistant professor at the University of Purdue, tells Mic that "building social systems to support workers," including child care, housing, and health care, is among the most important work that the administration can do in its infrastructure plan. "The beauty of that approach is that it further stimulates local economic activity while deepening community resources,” Flachs says. He also notes that expanding child care would provide an outsized positive impact for lower-income families and should have widespread support in Congress.

Another $100 billion within the American Jobs Plan is set to go toward programs designed to modernize the country's grid, weatherizing and improving it to make sure it is not susceptible to failures and blackouts. The major loss of power that occurred in Texas last month as extreme cold weather hit the state is surely front of mind, but the administration recognizes that much of the country's grid is outdated and at risk of failing. Americans spend more time per year with the lights out due to grid failure than people in any other industrial nation, in large part because our infrastructure cannot withstand increasing instances of extreme weather. Part of the $100 billion will also go toward establishing a "clean electricity standard," which will create a federal requirement that a certain percentage of the country’s electricity come from clean energy sources like wind, solar, and nuclear power. This will be achieved by creating incentives for states and companies to embrace clean energy infrastructure.

Perhaps one of the most ambitious planks of the American Jobs Plan is the expansion of high-speed internet access. The Biden administration is setting aside $100 billion to expand broadband infrastructure throughout rural areas that have largely been left behind by internet service providers, who have mostly chosen not to build out their networks to serve communities with smaller populations. The result is that nearly 1 in 4 Americans do not have a wired internet connection, and nearly 20 million people don't even have the ability to access broadband internet even if they wanted to. This disproportionately affects rural and Indigenous communities, as well as communities of color.

Overall, the plan calls for spending $2 trillion over the next eight years, with a plan to pay for it by increasing taxes on corporations and eliminating the tax preferences that many fossil fuel producers currently enjoy. That has already drawn the ire of conservatives, including the United States Chamber of Commerce, which called the plan "dangerously misguided." Those talking points are likely to be repeated by Republicans in the House and Senate, who will likely recognize the need to improve infrastructure while shooting down any method of actually accomplishing that if it means more corporate taxes.

Meanwhile, America's infrastructure really cannot wait any longer for repair. The American Society of Civil Engineers has given the country's overall infrastructure a C- grade while noting that many of our essential roads and bridges are deteriorating quickly. "Previous administrations neglected transportation infrastructure, leading the U.S. to the tipping point," Painter says. "We either uphold the status quo and continue to let an unsustainable system thrive, or we take a turn to a more sustainable future."