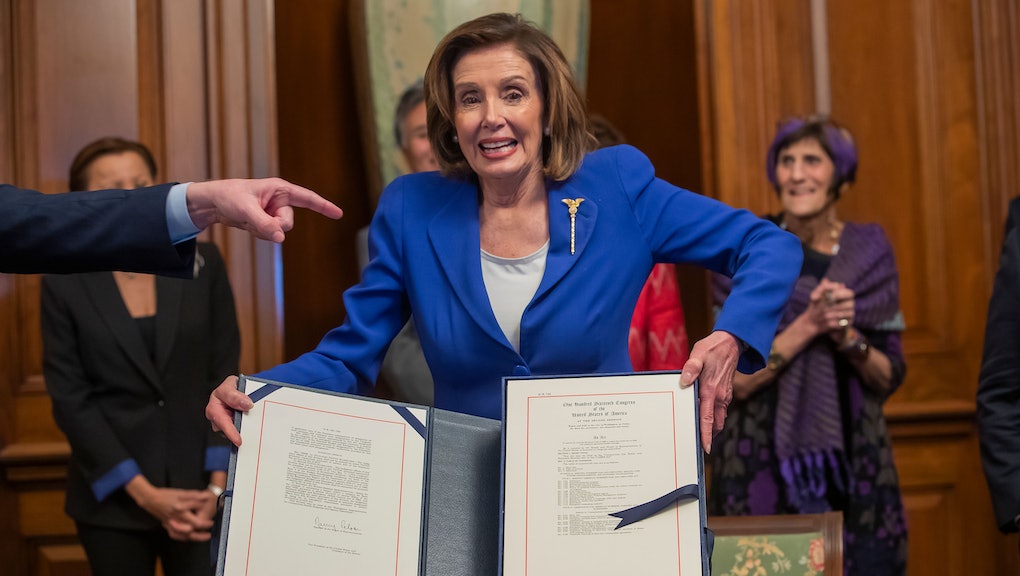 Will there be a "Phase 4" of coronavirus relief?

Democrats and Republicans, afraid that the massive stimulus package passed last week won’t be enough to keep the United States economy from tanking, are already working on the next phase of government aid. This time, President Trump and House Speaker Nancy Pelosi both seem to agree on the need for the so-called “Phase 4” package to include a raft of funding for infrastructure. By this point, “infrastructure week” has become something of a meme in politics; throughout his presidecy, Trump has declared that the White House is working on some vague new infrastructure project or another, even as nothing materializes and the White House inevitably becomes distracted by a fresh scandal or crisis.

This time, though, Americans may finally see massive new investment in public projects as a way to get thousands of unemployed Americans back to work. According to reports, the next coronavirus bill as early as this month, and it could include trillions of dollars in infrastructure spending. The previous three bills have focused on cash for workers, small business loans, and corporate bailouts.

On Tuesday morning, Pelosi said in a TV interview that she wants the infrastructure dollars included in the next phase of spending to be “specific to the coronavirus challenge.” She mentioned a series of projects that could be the focus of the deal: “Water systems, they’re so essential,” she said, “Broadband, because so many people are relying on telecommunications and social media and the rest, and other aspects of infrastructure that will help get us through all of this,” adding that there would be provisions for “surface transportation and the rest” too. The same day, Pelosi also told reporters that “the president said during the campaign — and since — [that] infrastructure was a priority for him. So that’s why we believe that in terms of recovery, that’s probably the most bipartisan path that we can take.”

Pelosi sparked a rare lukewarm tweet from the president, who declared that “she wasn’t bad” in her TV interview. (Nevermind that the rest of the tweet was packed full of his characteristic insults.) Considering their acrimonious relationship, the missive is a promising sign that something could actually be worked out. Later that day, Trump described a possible infrastructure package on Twitter.

If such a bill is going to become a reality, then powerful Republicans like Senate Majority Leader Mitch McConnell will need to get on board. So far, he’s expressed reservations. “I think we need to wait a few days here, a few weeks, and see how things are working out,” McConnell said Tuesday on TV. The massive $2 trillion coronavirus relief bill, which will see one-time payments disbursed to many Americans, was finalized just last week.

“I’m not going to allow this to be an opportunity for the Democrats to achieve unrelated policy items that they would not otherwise be able to pass,” he continued. It’s a line McConnell has repeated often in the last few weeks as lawmakers have rushed to negotiate aid packages for an ailing country.

Not all Senate Republicans have been critical of the idea, though. “I think the speaker’s right that infrastructure would be a good place to start because that’s something that’s the responsibility of the federal government to begin with,” said Republican Sen. Kevin Cramer (N.D.) Tuesday on Fox Business. “In terms of the recovery, yeah, I think there might be some things that we need to do. What I don’t want to do is to get out ahead of our skis and start making massive policy changes that reflect political extremes,” he said.

It's not a certainty, though, that another bill will happen. CNBC reported Wednesday that while Democrats, including Pelosi, have voiced a desire for another relief bill that focuses on additional cash infusions for Americans and expanded free coronavirus testing and treatment, some administration officials have put the kibosh on the idea. “Right now there is only executing Phase 3,” one unnamed administration official told CNBC.

At this point, difficult partisan battles seem to lie ahead, as per usual, even for the ostensibly agreeable idea of infrastructure spending. Still, if anything is powerful enough to transform Infrastructure Week from a running joke into a reality, it might just be coronavirus.