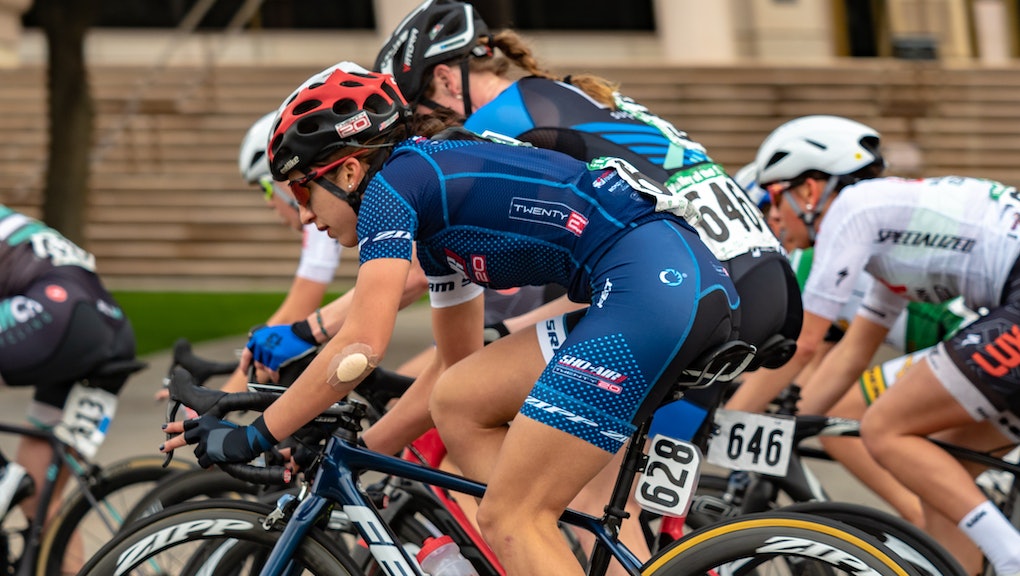 Women athletes are notoriously underpaid. Can one race help to shift the culture?

On the third day of the Colorado Classic, a pro cycling road race, Denver's streets were so crowded that spectators from all over the world found themselves pressed together in a mass of giddy fandom that threatened to topple the orange plastic barrier walls. The cyclists were announced, one-by-one in their shining helmets, to a crowd screaming men and women ringing white metal cowbells. As the athletes sprinted up the first hill, they passed me in a blur of velocity, and I unexpectedly began to cry. I have been to a lot of events in my life, sporting and otherwise, and I have never seen a crowd like this cheering for women. The hum of change murmured beneath the din of the event, but I think we all felt it.

The Colorado Classic, held August 22-26th, 2019, was, for the first year since its inception, a women's only race. The organizers took the prize money set aside for the men's race and combined it with the women's allotted prize money. That meant that instead of the paltry $20k prize that women fought for in 2018, the big win, captured by the evanescent Chloe Dygert Owen, was $75k ($5k more than the men’s prize last year). Recently, thanks in part to the public activism of soccer star Megan Rapinoe, there has been a lot of public conversation around the topic of financial inequality in sports. But as I learned from talking to athletes and organizers, evening the playing field isn’t just about the money.

The truth is that, historically, audiences just haven’t been that interested in female athletes, and although this is starting to change, even the way we talk about sports is evidence that the very idea of female athletics is sort of an add-on. There’s sports, and then there’s female sports. There are athletes and then there are female athletes.

“I respect so much that people are saying that women should be paid more, but the reality is that we haven’t made the changes in infrastructure that allow that to be possible,” says Lindsay Goldman, racer and co-founder and owner of Hans-Bergan/Supermint team. Goldman implies that paying female athletes more isn’t just a matter of reallocating funds. “Every single person in the sport needs to focus on the value proposition and what it is about this sport that will generate money. This is a professional sport that exists to entertain. It has to attract fans. We have to get excited about these women athletes.”

Goldman believes that in order for women athletes to get paid and recognized more, there has to be a grassroots component. People who follow sports, write about sports, and support sports need to follow, write about, and support female athletes. Fan engagement equates to financial opportunity to sponsors, so if we want women to get paid more, it’s not just a matter of lobbying the governing bodies of sports, it’s about people showing up to support female athletes and demanding that sports outlets cover them.

Capturing audience attention begins with creating events worth watching and then marketing them creatively. “We’re starting at the customer. Our vision is to be the best women’s race in the world in five years. We want to use our platform to tell everyone how much dimensionality there is to these athletes. We want to showcase the athletes that are dominating this sport,” says Lucy Diaz, the COO of RPM Events, who oversees the Colorado Classic. She uses Chloé Dygert Owen as an example: Dygert Owen is the 22-year-old former track champ who won all four stages of the race riding for the Sho Air team.

Dygert Owen did not expect to win this race. In the past few years, she has struggled through a number of injuries, including a concussion and a torn knee ligament. She lost most of her 2018 season in recovery. So the fact that she swept the Colorado Classic is a testament to her dedication, resilience, and talent, and evidence that we should all be paying attention to an athlete who has moved from recovery to the top of her game. Dygert Owen won some substantial loot at the race, but at the press conference afterwards, she didn’t mention the money. Instead, she commented on how moved she was by unprecedented fan support. Dygert Owen’s story of determined recovery and victory excited fans, but it's also a reminder that women’s sports are not low impact or low stakes.

Other cyclists agree that while the extra money is cool, and largely symbolic of a shift in culture, but it’s equal opportunity, respect, and shine that a lot of women athletes are in it for. “Not feeling like an afterthought in terms of race organization is a big deal. For the first time, we are the main event,” says Dygert Owen’s teammate, Erica Clevenger. “This does feel like a movement. If you look at what’s happening in other sports, like tennis and gymnastics, you can really tell what support turns into. We need support to progress.”

Fans’ outpouring of support for the US Women’s Soccer Team was incredible, and it moved mountains. But in order for the ripple effect to happen, female athletes don’t just need us to just write outraged tweets about pay inequity, they need us to show up and fan up. They need us to buy merch, follow their social media feverishly, and build hype. Sometimes we poke fun at obsessive male sports fans, but we have a lot to learn from them right now. If we want female athletes to make more money, let’s paint our faces in their team colors and wear silly bicycle shaped hats and have Sho-air-themed weddings. As Diaz says, “We need to put our money where our mouths are.”

Editor's note: The writer's trip to the Colorado Classic was paid for by the organization.

More like this
Sex workers deserve to eat well. And Meals4Heels delivers
By Lovely Brown
Can TikTok's new résumé feature really help you find a job?
By Tracey Anne Duncan
Wanting to start a family motivated us to pay off $126K in a year
By Marianne Eloise
Stay up to date