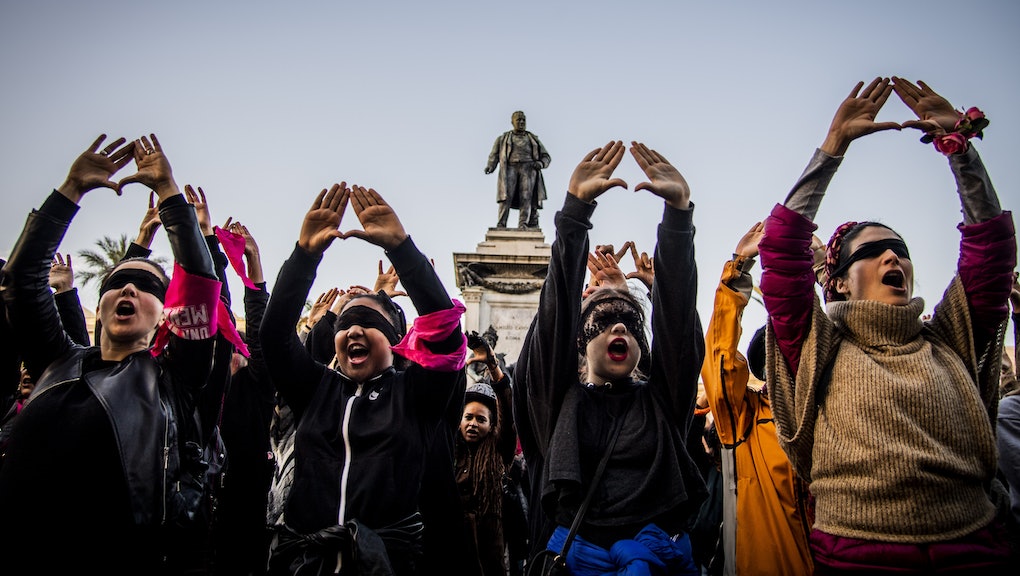 Across the United States, women continue to face barriers based on gender and other intersecting factors like race, age, or disability. Now, the World Economic Forum's Global Gender Gap Report has found that the United States slipped over the past year. With global gender equality predicted as over 200 years away, it seems that North America as a whole may be slowing things down.

The report analyzes 153 countries to measure gender equality. The countries are split into regions like North America, the Caribbean, Western Europe, and more. The report focuses on four categories: economic participation and opportunity, educational attainment, health and survival, and political empowerment.

This year, the top 10 countries are Iceland, Norway, Finland, Sweden, Nicaragua, New Zealand, Ireland, Spain, Rwanda, and Germany. You may notice that the United States is nowhere to be found on that list — and it's because we've never really ranked that high. In fact, the United States fell two spots from 2018, ranking 53rd globally.

Overall, North America — which is just the U.S. and Canada, which ranks 19th — isn't expected to close the gender gap for another 151 years. That's behind every region other than East Asia and reflects a "lack of progress in the region this year".

"This year's report highlights the growing urgency for action," the report says. "At the present rate of change, it will take nearly a century to achieve parity, a timeline we simply cannot accept in today's globalized world, especially among younger generations who hold increasingly progressive views of gender equality."

The U.S. falling in rank isn't all that surprising. The report noted that the standstill is mostly due to "a small retraction in its Economic Participation and Opportunity performance." Take the gender pay gap which has remained relatively stable over the past 15 years, according to the Pew Research Center.

There are other factors at play, too. For example, the report looks whether legal frameworks protect women's reproductive rights and maternal mortality rates. Both of these are huge issues in the U.S.

Throughout most of the world, maternal mortality is declining, but the U.S.' rates more than doubled since 1987. The situation is especially serious for Black women who are three to four times more likely to die from childbirth complications than white women.

The past year alone has seen a dramatic increase on attacks on reproductive rights, too. In Ohio, lawmakers want to require doctors to perform impossible medical procedures, multiple states require doctors to push an "abortion reversal" pill with no known benefits, and more.

"We must also recognize that figures such as these are based on averages," Toni Van Pelt, president of the National Organization for Women, told Newsweek. "For women of color the wait could be even longer. We want equality NOW."