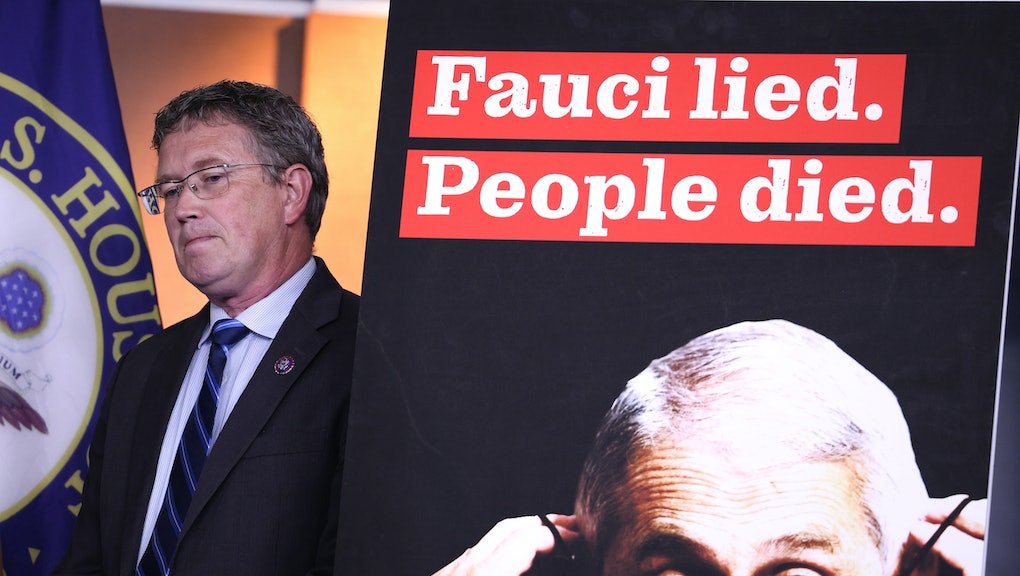 Time to Log Off is a weekly series documenting the many ways our political figures show their whole asses online.

The pantheon of conservative lunatics whose every waking moment in elected office consists of saying insane things, and then feigning injury whenever someone notes that "hey, the thing you just said is absolutely insane," is fairly well-established at this point. There are Q-addled minds like Colorado's Lauren Boebert and Georgia's Marjorie Taylor Greene; white nationalists like Paul Gosar, the Arizona congressman whose entire family hates him; and Texas Rep. Louie Gohmert, whose shtick is making sure no one in Congress is dumber than he is.

But somehow, whenever people talk about the who's who of complete nutcases in the GOP, Kentucky Rep. Thomas Massie manages to slip under the radar. At least, he had before this week, when Massie chose to weigh in on the mere prospect of so-called "vaccination passports," that deeply offensive, uh, medical card that says someone's been inoculated against the extremely contagious, deadly disease that's killed more than half a million people in this country so far. And boy oh boy did Massie weigh in, skipping right past the usual — and now depressingly clichéd — conservative comparisons to wearing gold stars and "papers please" authoritarianism, and instead going straight to Auschwitz, the infamous Nazi death camp.

Folks, I give you Thomas Massie:

Where to even begin? How about the fact that Massie's tweet — featuring the infamous numbers tattooed by Nazi death camp officials onto prisoners — seems to ignore the fact that we've had to show cards to get into restaurants, venues, and events in this country for decades. Has Massie never tried to order a drink at a bar? Or enrolled children in public school? Or boarded a plane? All of these are extremely benign, commonplace activities which — surprise surprise! — necessitate showing some sort of documentation.

But the factual bogusness of Massie's message isn't the real problem here. The issue is less "he's wrong" (he is) as it's a classic example of antisemitic Holocaust exploitation, in which a minor inconvenience (if it's even that) is somehow even remotely on par with the state-sponsored eradication of European Jewry, queer communities, Roma, suspected communists, and others. And by invoking Auschwitz, rather than other aspects of the Holocaust, Massie made it clear that in his mind, being asked to show that he wouldn't infect others with a deadly plague is the same thing as being a dehumanized prisoner in a Nazi death camp.

It's worth noting that Massie left the above tweet up on his account for hours before ignominiously deleting the picture without explanation. Did someone on his staff politely inform him that antisemitism is a bad look for a sitting congressman? Did Twitter threaten to suspend his account for broadcasting dubious pandemic fearmongering? We may never know. What we do know, however, is that Holocaust comparisons are — once again — back in vogue within the far-right, despite the fact that each and every time we've gone through this with Greene and the like, it's ended poorly.

You want examples? Okay! First up, I give you John Catanzara, president of Chicago's Fraternal Order of Police union, responding to Democratic Mayor Lori Lightfoot's Oct. 15 deadline for city employees to be vaccinated:

"We're in America, Goddamn it. We don't want to be forced to do anything. Period. This ain't Nazi fucking Germany,: 'Step into the fucking showers. The pills won't hurt you.' What the fuck?"

I'm sure the people of Chicago can sleep well at night knowing their safety is in the hands of reasonable, well measured, deeply thoughtful law enforcement leaders like John.

"It makes me wonder what it is that we are doing as adults right now in this country. In fact, somebody said to me, via comment, that it feels like today it's Hitler Youth or Stalin Youth. And, actually, I said back to them no, you're wrong, because Hitler and Stalin Youth were taught to love their country. Think about that."

Say what you want about the literal Nazis, at least they were patriots, right? Unlike Massie and Catanzara, whose comparisons operated from a place of assuming we can all agree that Hitler's Germany was bad, Owens would like the public to know that, hey, they had some good ideas, too.

We've gotten to a place in the "I enthusiastically commit myself to being a shameless viral carrier" discourse where Holocaust comparisons are not only becoming more and more common, but they're intensifying to the point of waxing nostalgic about fascist nationalism. If that's not a sign that it's time to log off, I don't know what is.