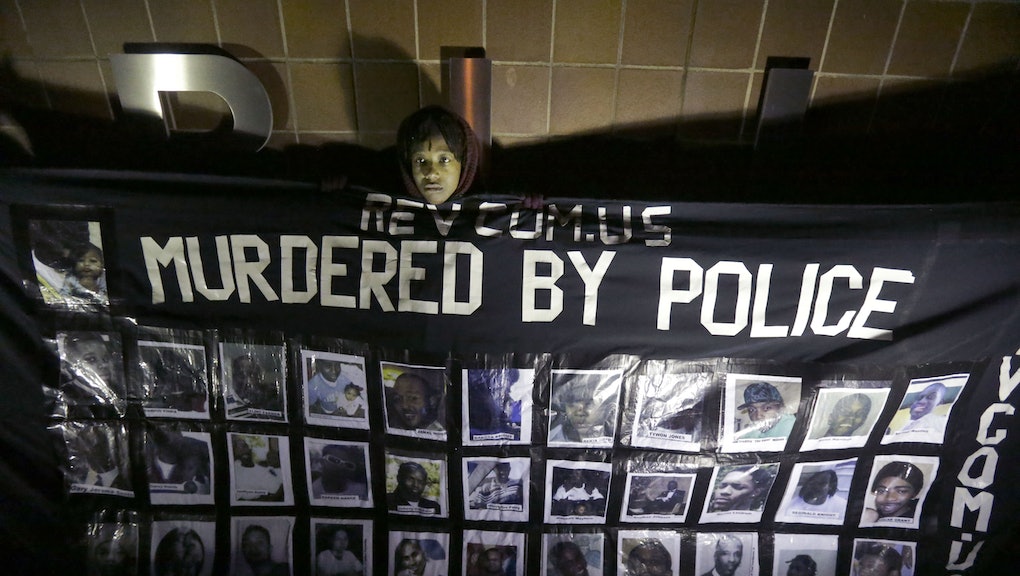 After weeks of deliberation and speculation, a grand jury in Missouri has declined to indict Officer Darren Wilson for killing unarmed black teenager Michael Brown in August.

As protesters fill the streets of Ferguson and continue to question the relationship between law enforcement and African-Americans, one thing is sure: American police officers shoot more civilians of all races and walks of life than many other advanced countries.

In 2012, 410 Americans were "justifiably" killed by police, according to FBI data examined by the Economist. By contrast, British police officers fired their weapons just once that same year. No one was killed.

The data continues to draw a stark picture: In the U.S., you're far more likely to be gunned down by a police officer than other countries:

Even after adjusting for the smaller size of Britain's population, British citizens are around 100 times less likely to be shot by a police officer than Americans. Between 2010 and 2014, the police force of one small American city, Albuquerque in New Mexico, shot and killed 23 civilians; seven times more than the number of Brits killed by all of England and Wales' 43 forces during the same period.

But why is this? The Economist explains:

The explanation for this gap is simple. In Britain, guns are rare. Only specialist firearms officers carry them, and criminals rarely have access to them. The last time a British police officer was killed by a firearm on duty was in 2012, in a brutal case in Manchester. The annual number of murders by shooting is typically less than 50. Police shootings are enormously controversial. The shooting of Mark Duggan, a known gangster, which in 2011 started riots across London, led to a fiercely debated inquest. Last month, a police officer was charged with murder over a shooting in 2005. The reputation of the Metropolitan Police's armed officers is still barely recovering from the fatal shooting of Jean Charles de Menezes, an innocent Brazilian, in the wake of the 7/7 terrorist bombings in London.In America, by contrast, it is hardly surprising that cops resort to their weapons more frequently. In 2013, 30 cops were shot and killed — just a fraction of the 9,000 or so murders using guns that happen each year. Add to that a hyper-militarized police culture and a deep history of racial strife and you have the reason why so many civilians are shot by police officers. Unless America can either reduce its colossal gun ownership rates or fix its deep social problems, shootings of civilians by police — justified or not — seem sure to continue.

The U.S. has a problem with police and guns. It may be racial — many observers in Ferguson and beyond seem to think so — but it's an undeniable fact that police officers may be the deadliest force on the streets. Just look at a recent report from the Salt Lake City Tribune, which found that more Utahns have been killed by police than by gang members, drug dealers, child abuse or domestic disputes in the past five years. Or a 12-year-old Cleveland boy shot and killed for wielding a pellet gun in public.

It makes sense, sadly: The U.S. has a gun problem as it is, according to this analysis of gun deaths and gun ownership in advanced nations:

But the death of Michael Brown speaks to a larger issue with guns in America. Law enforcement officials needs the appropriate tools to to their jobs and protect themselves — but not at the expense of the population they're sworn to defend. After all, it's "Protect and Serve," not "Shoot to Kill."