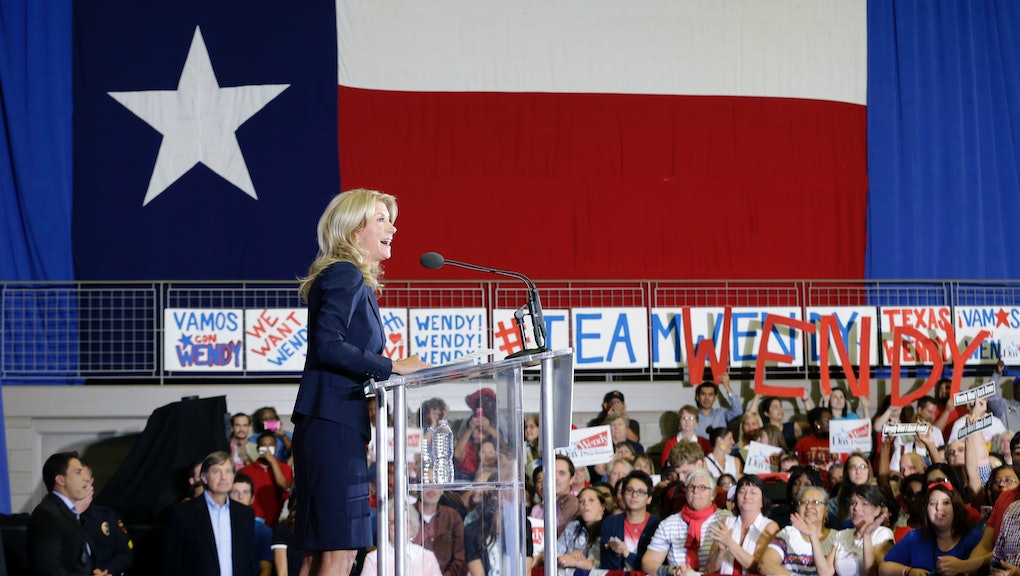 Thought Republicans had tried every trick in their sexist gimmick bag to insure that women's rights remain as Mad Men era-ish as possible? We all knew they wanted to limit women's right to get abortions, take birth control, fight off sex discrimination, feed themselves and their families, but now they want to restrict one of the most fundamental pillars of gender equality: women's right to vote.

Generally speaking, voter suppression is nothing new. Republicans have been insidiously doing it for years, despite the passing of the 1965 Voting Rights Act, a landmark legislation that made it illegal to make it difficult to make people vote. In an essay on MSNBC, Barbara Arnwine and Eleanor Smeal explain that despite the radical changes that the law brought into place, states have still continued to try to pass voter suppression regulations. Just this year, 30 states have proposed some sort of legislation that would make voting harder to do, whether it is by enforcing voters to present photo ID or by reducing the amount or accessibility to polling stations. This has notoriously, by and large, affected minorities, students and seniors, but as Smeal and Arnwine note, another group that's largely affected but rarely discussed, is women.

"What is not commonly known, however, is that women are among those most affected by voter ID laws. In one survey, 66% of women voters had an ID that reflected their current name, according to the Brennan Center. The other 34% of women would have to present both a birth certificate and proof of marriage, divorce, or name change in order to vote, a task that is particularly onerous for elderly women and costly for poor women who may have to pay to access these records."

So what does this have to do with Wendy Davis? Well since the badass state senator who quickly rose to fame after an impressive 11-hour filibuster over a state legislature anti-choice bill, is the Democratic front-runner for the gubernatorial race, and her support base is mostly made out of women, these laws could directly impact her numbers. Although polls show an equal split amongst female voters in Texas between Davis and the Republican front-runner Abbott, many are expecting Davis to get women to cross party lines, just like Ann Richards managed back in 1990. The first female governor of Texas didn't only get 61% of women to vote for her, she also managed to get the support of 21% of the female Republican base.

Could it be that Wendy Davis' ideological opponents are so profoundly terrified that she might just win that they are implementing voter suppression policies that would make it harder for her biggest support base to vote for her? It's unlikely. This isn't a direct attack on her campaign since the Texas voter law was announced on June 23, two days before her infamous fillibuster, and long before she announced her run. Nonetheless, this will have a direct impact on her race.

According to Think Progress, the law will come into effect on November 5. From this moment on, voters in Texas will be forced to present a photo ID that matches up with one's legal name. Sounds like a simple requirement, until you realize that 34% of women can't actually present that document, while 99% of men can. How come? Because it's still common practice for women to legally change their name when they get married, but many don't immediately get their identification documents updated. It requires a trip to the DMV and since Texas only has 81 offices for its 254 counties, it's not like they are on every corner.

Sure, some women may scramble and find time to figure this all out in time for the election, but let's face it: American women have a lot less time to spare than men. So placing an undue burden on them to go wait in line at the DMV, is not realistic. Many of them, especially those who are elderly, can't trace back the chain of documents that they need, and many don't even know where to find them. Ultimately, this means voting will be harder and virtually impossible for a slew of eligible female voters.

But wait, doesn't this new law mean we will fix the unmanageable voter fraud taking place across the great state of Texas? Well it turns out that's just as fabricated as John Boehner's tan. As PolicyMic pundit Natalie Smith notes, there have only been 37 individual cases of voter fraud in Texas since 2000. That's less than three cases a year. Making it harder for millions of female voters to get to the polls seems like a disproportionate response.

Texas has been trying to turn back the clock on women's issues for a long time, but it's absolutely shocking to see Republicans going as so far as attacking a woman's right to vote. It's an attack on personal freedom, it's an attack on democracy, and something tells me that when Wendy Davis wins her seat, she'll be putting and end to this malarkey. Until then, you can find me at the martini bar. I'll be the one wearing a full-length skirt and a fur bolero jacket so that I can fit into the Mad Men theme party that is Texas politics right now.

Spread the word about the Republican's attempt to suppress female voting and let me know what you think on Twitter and Facebook.

10 Reasons You Should Love Wendy Davis

Show This Video To Anyone Who Still Believes Sexism Doesn't Exist