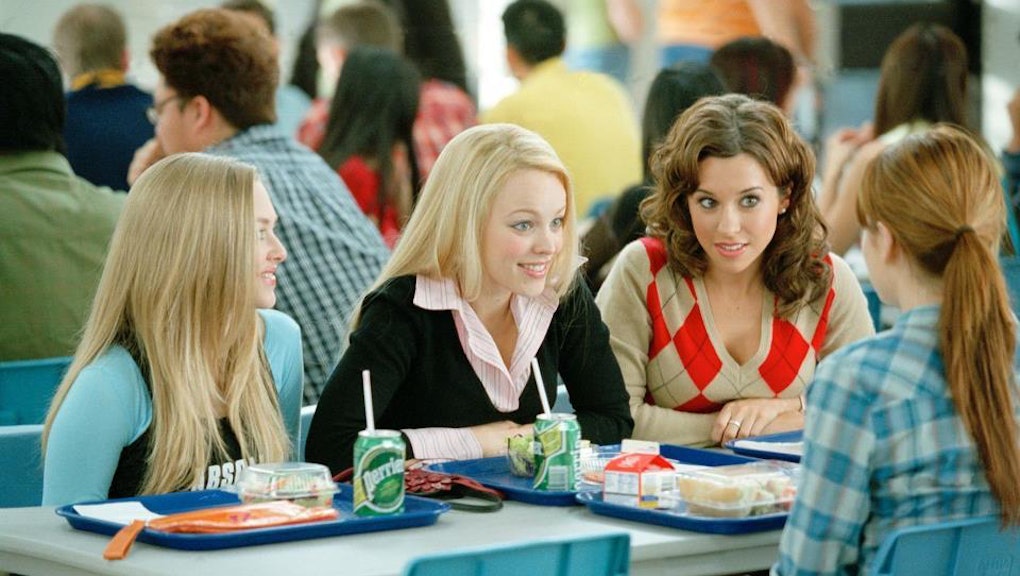 It's been 10 years since the classic teen movie Mean Girls hit the silver screen and a generation of young women started quoting the movie's dialogue line-by-line. The film has become iconic for its golden comedic screenplay, written by the talented Tina Fey, and its realistic take on high school drama. From backstabbing popular girls to the art-nerd revenge, Mean Girls' characters taught female movie-watchers more serious life lessons about high school, Girl World and womanhood than might immediately meet the eye.

Here are 10 valuable lessons for girls to learn from this teen movie staple.

1. Obsessing over your "flaws" is unhealthy.

"I used to think there was just fat and skinny," Cady Heron says, "But apparently there's lots of things that can be wrong on your body." In a world where we girls are constantly scrutinized for our bodies, it makes sense that we can get down on ourselves for the shape they're in. But, there's a between difference between airing out one's insecurities and obsessing over them. Cady's confusion over the Plastics bemoaning their physical state in the mirror shined a light on how ridiculous and overblown self-scrutiny can become, especially when its about how "weird" your hairline is.

2. Never pretend to be less intelligent than a boy just to get his attention.

Cady's con artist math-class act with Aaron Samuels taught girls that they definitely should not pretend to be less intelligent than boys just to get attention. Boys out number girls four to one in scientific fields, and the last thing the world needs are girls who feel afraid to be in these fields because of that. If men are intimidated by women who dominate where they're used to ruling, that's their problem.

3. Girls need to stop calling each other "whores."

One of the most brilliant quotes from Mean Girls, and the most applicable to real Girl World, is Ms. Norbury's insistence the girls quit the slut and whore talk. Girls have it hard enough in a world where men shame them for their sexuality, so why add to the girl hate? When girls make their peers feel bad for having sex, boys will take note and think its okay to do the same.

No matter what you've been through, somebody else has been through it too. Whether it's bullying in the high school halls or a more permanent life-altering event, you share more experiences with your fellow women than you may realize.

Friendship is based on trust and compromise, but sometimes controlling people masquerade as "friends" when they really want to boss people around for their own personal gain. One look at Mean Girls tells us that power structures can fall at the drop of a prom queen's crown. So no matter how powerful someone may seem, especially in high school, if that person is taking advantage of you or making you feel weird for simply being yourself, kick her to the curb.

6. Feeling beautiful isn't something to be ashamed of.

It's OK if your answer to the question, "So, you think you're really pretty?" is a "Yes!" Society does not like women who are confident in their looks. These days, women get called narcissists and ridiculed for just posting selfies. But there's absolutely nothing wrong with loving the way you look.

7. Do you, and stop comparing yourself to other people.

Whether you wish you had someone's job, clothes, life, whatever, don't let those desires distract you and make you jealous. Telling yourself a person is "less than" you in any regard doesn't make you a bigger or better person. When you stop comparing yourself to other people, you can start focusing on you and your goals.

8. A friend who doesn't respect you isn't a friend at all.

True friends don't verbally abuse each other, call one another stupid or bitches. It can be hard to make friends, but don't get stuck with "friends" who don't talk to you like a true friend should.

9. Your sex life is your business.

Whether it's your disturbingly incompetent health class gym teacher, or your over-bearing helicopter "cool" mom, or your nosey friends, your sex life is your business. And if you want to share your sex life with the world, that's cool, and if you don't, that's cool too! But don't let people invade your personal space and make you feel uncomfortable for your sex life or your body.

10. Girl World should be a place of support, not fighting.

Girls are taught to hate each other. They're taught to be competitive with one another and to constantly compare their bodies, their clothes and their intelligence. Typical girl compliments include, "she isn't like the other girls" or "she's one of the boys" because young women often don't want to align themselves with how the media may portrays them: catty, self-centered, spoiled. But if Mean Girls taught us girls one thing, it's that we need each other's support more than anything. (Oh, and maybe a cake filled with rainbows and smiles wouldn't hurt either!)