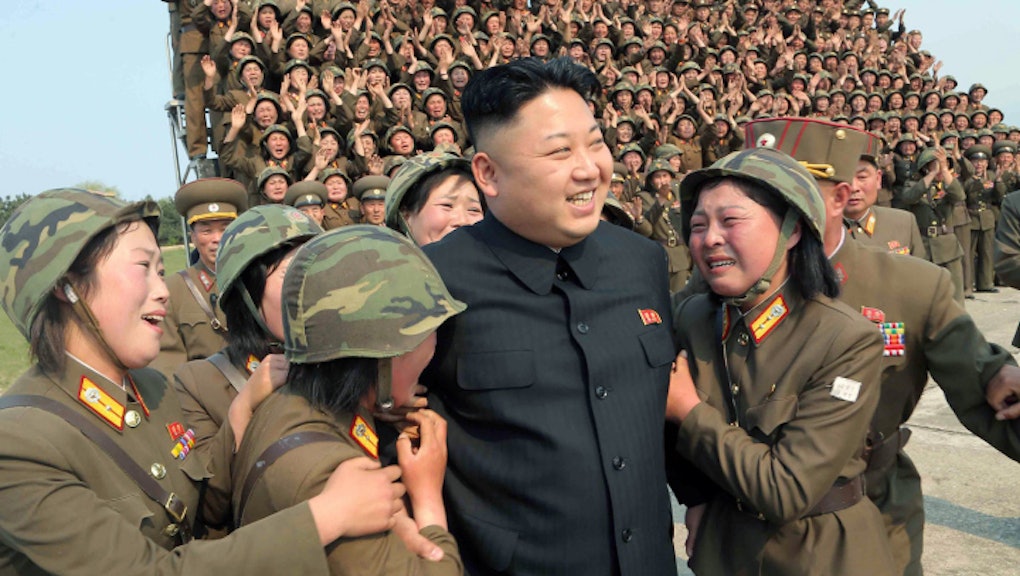 The 11 Most Viral Images You May Have Missed This Week

Partygoers here listen to live music and smoke the good stuff at the annual 4/20 celebration in Denver, Colorado, this past Easter Sunday. This year's festival is the first since the possession and sale of recreational marijuana was fully legalized in the state this January.

Why is 4/20 such a big deal for marijuana enthusiasts? In the 1970s, a group of stoners at San Rafael High School in California supposedly gathered at 4:20 p.m. to smoke some ganja and seek out a gigantic weed crop in Point Reyes. They had found a handwritten map that pointed to the massive crop. Unsurprisingly, they never found the mystical stash. The catch-phrase they used ("4/20-Louis") partially caught on.

2. Easter at the White House

In a decidedly more sanitized portrait of this past Sunday, the Obamas host the annual Easter Egg Roll at the White House. Every child had to pass through a security screening (probably).

3. Right-Wing Folk Hero Cliven Bundy Comes Out as a Racist

Nevada rancher Cliven Bundy ignited a populist firestorm in recent weeks when an armed posse of conservative supporters rallied to chase off federal officials seeking to remove his cattle from federally-owned lands. But he just couldn't resist using his soapbox to suggest that blacks might have been better off as slaves. A slew of GOP politicians raced to distance themselves from Bundy in the ensuing aftermath.

Pop star Justin Bieber was forced to remove this image of him dropping by Tokyo's Yasukuni Shrine, which honors the country's dead from World War 2, from his Instagram feed. Chinese fans were less than impressed, accusing the pop star of accidentally honoring Japanese war criminals who committed atrocities like mass murder and rape during the Empire of Japan's arguably genocidal campaign in mainland China.

Bieber apparently has nothing on Kim Jong-un, who was recently depicted in undated photographs released by the North Korean government on Thursday being mobbed by sobbing female soldiers desperate for a chunk of the supreme leader. President Obama will visit South Korea on Friday, triggering a standard North Korean propaganda response that included this image.

6. Colbert Takes a Selfie With Letterman

Pro-Russian gunmen show off a detainee in Donetsk, Ukraine, who they claim to be a member of nationalist Ukrainian forces. The tension has steadily grown over the past week as the New York Times and the State Department revealed hotly contested photographic evidence they claimed demonstrated the masked gunmen seizing government buildings throughout the Eastern Ukraine were Russian troops.

In another sign that the prohibition on marijuana is becoming an increasingly untenable situation, the Daytona City Paper couldn't find a single staffer or op-ed writer willing to write a rebuttal to marijuana legalization arguments for its debate forum page. Read more about this on PolicyMic here.

9. The NYPD Gets Internet Backlash

The NYPD's #myNYPD campaign backfired big-time this week, with the hashtag it created becoming overwhelmed by backlash from Twitter activists who sought to expose the department's abuses.

Really, they should have seen this one coming.

Google's Street View project now lets you roll back the clock to the start of the project in 2007, showing nearly a decade of transformation in the blink of an eye. As we wrote earlier this week:

The project currently covers under a decade of transformation as captured by Google vans. Imagine how much will have changed in another decade ... a century ... hell, a millennium. Generously assuming someone keeps up the project, archives its data or comes up with an even more impressive successor, imagining the past may be history. Future generations will be able to just type in a time and place and take a look for themselves.

11. Leaked Emails Reveal Just How Rape-y American Frats Can Be

Seventy (seriously NSFW) horrifying pages of leaked emails and text messages from American University's "secret fraternity" Epsilon Iota show how the frat's members continually referred to women as "bitches," seemingly plan what could be date rapes and accuse an alleged rape victim of being a "lying cunt."

This is just the worst.