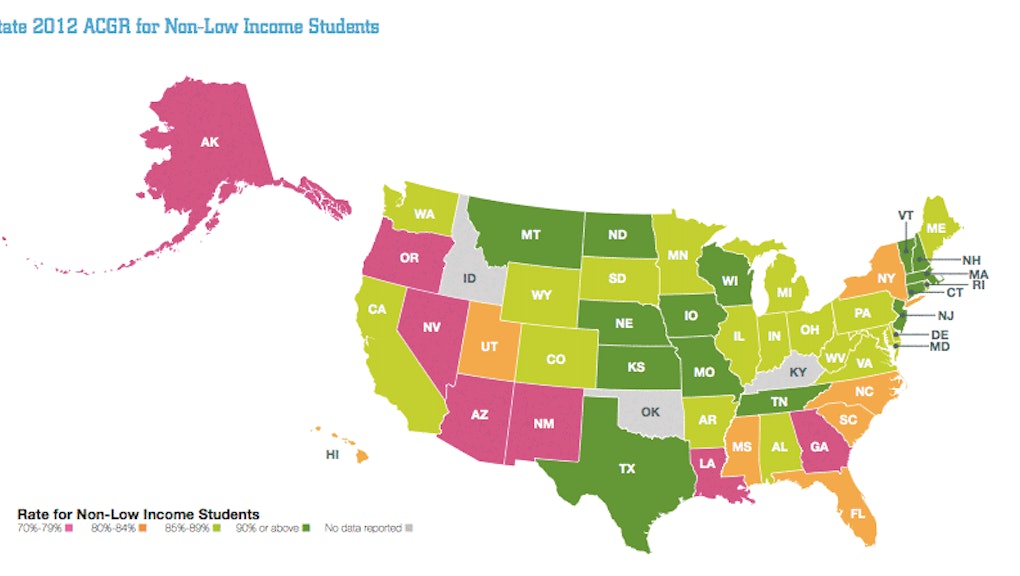 There's Actually Some Good News About the State of Education in the U.S. For a Change

The news: America's schools just haven't been up to par lately, falling behind on international PISA scores and failing to prepare students for a STEM-oriented economy. But there's also some pretty good news. According to a new report from America's Promise Alliance, a group founded by former Secretary of State Colin Powell, the national high school graduation rate surpassed 80% in 2012 and is on track to exceed 90% by 2020 if the trend continues.

The national rate now stands at 81%. This is a big deal.

Changes: On average, the U.S. graduation rate has grown by an average of 1.3% every year since 2006. Every ethnic group surveyed has seen a large increase in the graduation rate since 2006, with Hispanic students seeing a 15% rise and black students 9%. But they still lag behind whites, who have an 85% graduation rate. According to the report, improving educational outcomes among low-income students and the disabled is key to hitting the 90% margin. Low-income students graduate below 80% in 41 states.

Politico notes that large differences between states can mask poor outcomes. In Nevada, for example, fewer than 1 in 4 students with disabilities get a high school diploma. In Montana, that figures climbs to 81%. Meanwhile in Minnesota, a shockingly low 59% of low-income students graduate, compared to 87% of richer students. Even localities can make a huge difference:

"Some big city districts with large populations of low-income students boast graduation rates close to 80 percent. They include Des Moines, Iowa; Columbus, Ohio; Houston; Portland, Maine; and Miami-Dade County in Florida."At the other end of the scale, a handful of districts including Denver, New Orleans, Cleveland and Atlanta do not graduate even 60 percent of their students. At the very bottom of the pack: the Minneapolis Public School District, where an incoming freshman has just a 50 percent chance of earning a diploma."

Grade inflation? While numbers have risen rapidly, some states have lowered standards to inflate their graduation rates. In Florida, students don't need to take chemistry, physics or Algebra II to graduate, while Nevada lowered the score needed to pass mathematics exams by around 20%. But there were 32% fewer "dropout factories" (schools that graduate less than 60% of students) nationwide than a decade earlier. In 2002, 46% of African-American students attended a dropout factory; in 2012, it was a quarter. Hispanics boasted similar numbers, down to 15% from 39% in 2002. Six hundred and forty-eight dropout factories were closed.

The difference in graduation rates between 2006 and 2014 translates to about 1.7 million additional diplomas, and that's going to make a big difference if America's to catch up with the rest of the world.