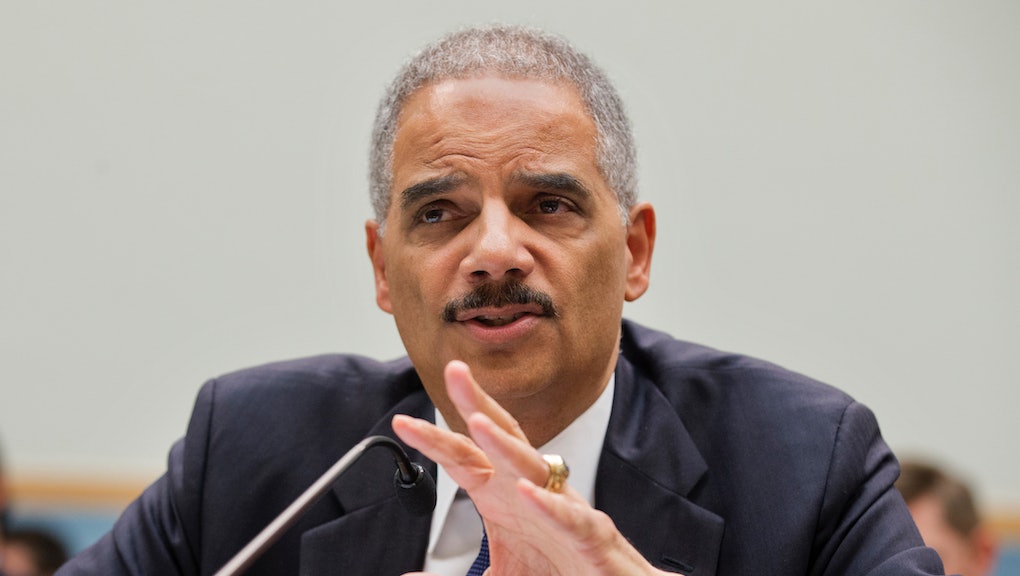 The news: Eric Holder has something to tell you about racism.

In his commencement speech at Baltimore's Morgan State University on Saturday, the U.S. Attorney General told his audience exactly how he felt about America's collective reaction to Donald Sterling, Cliven Bundy, Robert Copeland and their racist outbursts that have ignited a media firestorm over the past few weeks.

"[We] ought not find contentment in the fact that these high-profile expressions of outright bigotry seem atypical and were met with such swift condemnation," he told the graduates. "Because if we focus solely on these incidents — on outlandish statements that capture national attention and spark outrage on Facebook and Twitter — we are likely to miss the more hidden, and more troubling, reality behind the headlines."

Preach. He went on to explain, "These outbursts of bigotry, while deplorable, are not the true markers of the struggle that still must be waged, or the work that still needs to be done — because the greatest threats do not announce themselves in screaming headlines. They are more subtle. They cut deeper. And their terrible impact endures long after the headlines have faded and obvious, ignorant expressions of hatred have been marginalized."

This is an important reminder the popular narrative has largely forgotten. It may feel satisfying to publicly shame known bigots, but the systemic issues underlying their views have much broader implications that can't be ignored.

Holder refers to a few of these in particular. Appropriately, he calls out the persistent — though constantly reshaping — segregation of America's public schools 60 years after Brown v. Board of Education.

A recent study from UCLA's Civil Rights Project illustrates his points perfectly: Despite whatever myths about racial progress we've told ourselves, Black and Latino students remain significantly more likely to attend majority-minority schools, a designation that frequently correlates with understaffing, lack of resources and a higher likelihood of closure.

And this trend is only getting worse. Since 1991, for instance, the percentage of black students attending schools that were 90%-100% minority jumped from 35% to 40%, while "hyper-segregation" has increased nationwide.

But it doesn't stop there. Holder also touches on how these issues play out in prison sentence disparities. Since 2005, sentences for black men are on average 20% longer than their white counterparts who've committed similar crimes, according to the Wall Street Journal. What happened that year? The U.S. Supreme Court struck down a 1984 law designed specifically to alleviate such discrepancies, which have historically taken shape along racial lines.

Holder rounds out his critique by pointing to the racial agenda informing "voter fraud" prevention efforts, which have been used to disenfranchise registered voters — namely blacks, Latinos, young people and people with disabilities. Add that to recent Supreme Court rulings that erode key sections of the Voting Rights Act of 1965, and a persistent epidemic of institutional racism denial is revealed.

What can be done to change this? Interestingly, as PolicyMic's Elizabeth Plank points out, popular reactions to such incidents are often rooted in behavioral science. Issues deemed "moderately controversial" in ways that present clearly delineated moral dilemmas — like the Donald Sterling comments — receive higher levels of online engagement on average than more complex issues, like the recent Supreme Court rulings.

But as Holder points out, this is about more than just public sentiment. Sustained and committed engagement with these issues and those who would deny their existence is an integral first step toward overcoming them, and today's young people are in an ideal position to spearhead such efforts moving forward.