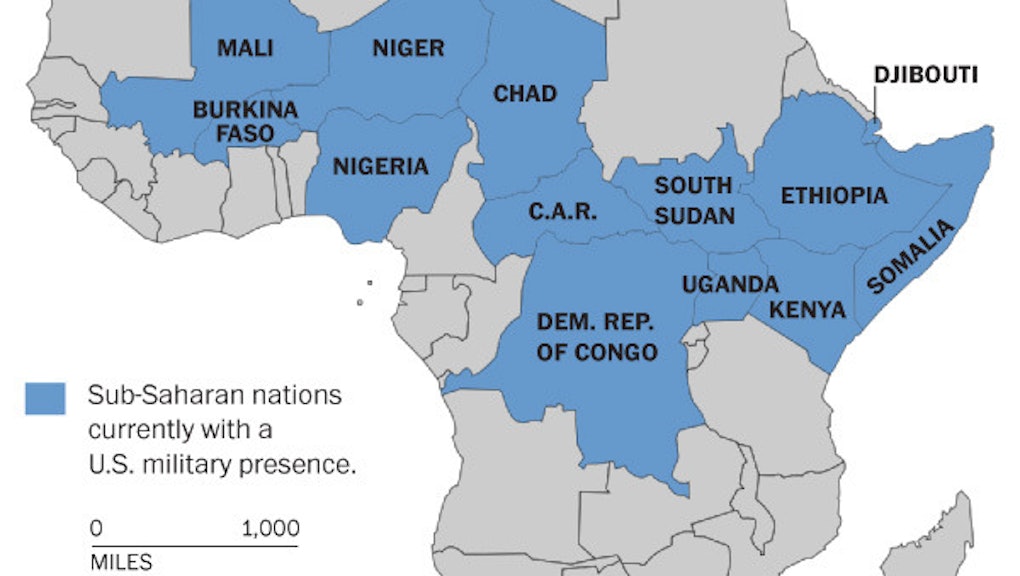 Surprising Map Shows All the African Countries Where the U.S. Has Active Military Operations

President Barack Obama made headlines Wednesday when he deployed 80 American troops to Chad. Their stated mission is to find the over 200 Nigerian girls kidnapped by Boko Haram last month, a crime that’s galvanized the international community.

But this is the U.S. military, and we’d be foolish to assume anything is so simple. Anyone worried about the broader implications of their actions need look no further than this map:

Thirteen nations – stretching from the Horn of Africa to Mali’s western border – already house U.S. troops involved in “actual military operations.” Their presence is widely considered part of an expanding “shadow war against al-Qaeda affiliates and other militant groups” in the region – and the American people know very little about it.

Like many wars throughout history, this one is starting small. Troop numbers remain low, and intelligence operations are housed mainly in small airbases constructed in the past seven years. They emphasize spy missions: Many involve aircraft disguised as private planes, and are equipped with full-motion sensors that track infrared heat patterns, record video and pick up radio and cellphone signals. At least 12 such bases have been built since 2007.

Things have been quiet thus far, but the U.S. has a troubled history of conducting proxy wars throughout Africa. Since 9/11 alone, American covert operations have contributed to violence and destabilization in Mali, the Central African Republic and Libya, among others. Without the level of pomp and troop involvement as the wars in Iraq and Afghanistan, U.S. forces can now subtly influence Africa’s political landscape as they see fit, while evading public scrutiny.

This should worry us. Despite their operations’ relative tameness nowadays – if launching drone strikes and fighting proxy wars can be considered “tame” – U.S. military intervention on the continent has rarely been without negative consequences. It’s grown increasingly important to remember this when calling for intervention in African affairs: Whatever Band-Aid effect Americans may have now, the long-term impact will be felt almost exclusively by the people who actually live there.

Remaining vigilant as our troops amass in growing numbers might be one of the few ways to avoid creating more problems we’re ill equipped to fix. The beginning of that process is education.

To that end, here’s a brief rundown of recent U.S. military activities and outposts in Sub-Saharan Africa:

Burkina Faso. Base established 2007 in Ouagadougou, launches spy planes to police and patrol the Islamic Maghreb.

Central African Republic. Part of the broader search for the Lord’s Resistance Army.

Chad. 80 troops deployed May 21 to search for the kidnapped Nigerian girls.

Djibouti. Home to Camp Lemonnier, a full-blown military base that houses 4,000 troops and has a $1.4 billion expansion plan in the works. Also faces allegations of being used as a “black site” where terrorism suspects are tortured. A congressional investigation into the issue has yet to be declassified.

Mali. Troops sent in 2013 to aid French and African forces in wartime, though the White House insisted they were not directly engaged in combat.

Nigeria. Troops deployed to aid the search for the kidnapped girls earlier this month.

Somalia. Fewer than two dozen troops deployed for “training and advising” purposes in 2014.

Uganda. Launches surveillance aircraft out of a base in Entebbe, mostly used to search for Joseph Kony’s Lord’s Resistance Army.