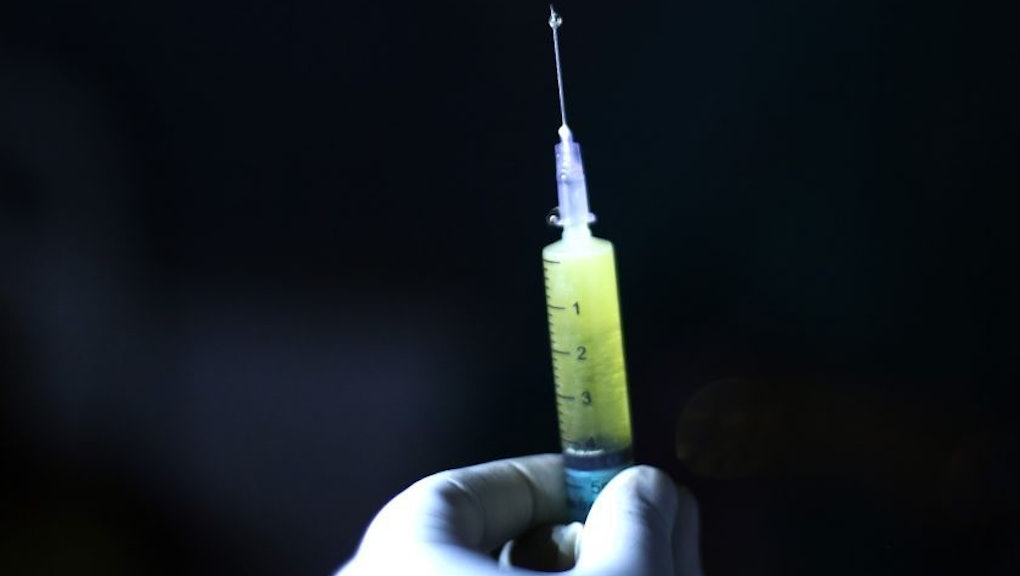 The other week, House Republicans passed a bill blatantly ignoring something 99% of scientists agree on. For several years now, anti-vaxx truthers have been vehemently arguing that vaccines are dangerous and cause autism, despite countless scientific studies finding otherwise. There are countless lies about things like marijuana and sex, and even with strong scientific evidence, a lot of people never want to change their mind.

Hoping to dig into this very strange (and sometimes dangerous) phenomenon, Brendan Nyhan, a professor of political science at Dartmouth and media critic, recently published his findings in a study called "Effective Messages in Vaccine Promotion: A Randomized Trial" in the journal Pediatrics. For his study, Nyhan followed a group of almost 2,000 parents broken up into four groups, each receiving a different message, according to the New Yorker:

"A leaflet from the Centers for Disease Control and Prevention stating that there had been no evidence linking the measles, mumps and rubella (M.M.R.) vaccine and autism; a leaflet from the Vaccine Information Statement on the dangers of the diseases that the M.M.R. vaccine prevents; photographs of children who had suffered from the diseases; and a dramatic story from a Centers for Disease Control and Prevention about an infant who almost died of measles. A control group did not receive any information at all."

Trying to understand whether facts, science, emotion or stories have the most effect on people's minds, Nyhan and his team were "depressed" with the findings: nothing worked. None of the various methods had any real luck changing the parents' minds. What's more, some parents became more deeply entrenched in their own anti-vaccine views after being exposed to the pro-vaccine material.

"If these messages were working, they should increase the intent to vaccinate," Nyahn told NBC News. "This highlights the extent to which we tend to overrate how persuasive facts and evidence are in all kinds of domains."

But the messages are not working, and people are not using more vaccines. In fact, they're using less — more than 1 in 10 American parents delay necessary vaccine shots for their children or refuse them completely. Public health officials have been scratching their heads over this and wondering why a former Playboy playmate is a more effective teacher than science.

And what about climate change? While the anti-vaccine movement is alarming, the fight on climate change is downright terrifying. A recent joint study from NASA and the University of California, Irvine, has shown that the total collapse of large parts of the Western Antarctic ice sheet has begun and now appears totally unstoppable, indicating that a catastrophic 10-foot rise in global sea levels over the next few centuries may be inevitable.

And yet, despite all the strong science, members of Congress have voted again and again to blatantly deny it's existence. And unfortunately for us, as climate change continues to go unaddressed and unchecked, rising water levels could soon have very real and devastating effects on numerous major metropolitan areas including Miami and New York.

What gives? The New Yorker's Maria Konnikova points out, "When there's no immediate threat to our understanding of the world, we change our beliefs. It's when that change contradicts something we've long held as important that problems occur." These ideas become so deeply ingrained in our world views that any potential new information that doesn't line up feels like an aggressive threat that needs to be defeated. We believe things that aren't true because we're scared about how our world might change if we found out we were wrong all along.

So what should organizations like the CDCP do? Maybe they could stop trying? According to new information from a group of researchers including psychologist Drew Westen, the best way to win an argument is to stop trying. According to their findings, when a discussion becomes an argument, it's no longer about logic or reasoning, but just a tug-of-war fight. However, when the science is so clear one way and moving further in the opposite direction is very dangerous, it's hard to give up on the fight.